By:Â UnknownÂ
Source:Â St. Petersburg Times
Date: May 19, 1957
A 16 year-old Clearwater boy is taking a deep interest in bees these days. They may be saving his life.
It worries him that the ones who come to his aid must die in return.
The youth is Jackie McAllister, son of Mr. and Mrs. Paul McAllister and afflicted since babyhood with hemophilia, a rare disease that causes bleeding easily and makes it hard to stop.
Signs of it became apparent when he was a baby. He bruised easily from little bumps against his crib and playpen. Normal falls produced unusual bleeding. A sneeze has produced a severe hemorrhage.
He attends school and plays kickball and basketball, but his friends beware of bodily contact.
About three months ago Jackie started kidney bleeding. It was most serious because there could be no operation.
Jackie’s physician, Dr. Vernon L. Hagan, called on an ancient remedy he remembered reading about – bee stings. He called on another patient, David Phillips, a bee- keeper, to supply the stings.
Jackie has received three treatments, at three-week intervals, 12 – 15 stings at a time. Giving the treatment, Phillips lifts the top off a hive, plucks out a bee by its wings, and presses the bee against Jackie’s arm or leg. When the bee stings, it is pulled away and it dies, for its stinger is left behind in Jackie’s flesh. The stinger is left in place for an hour, to get full benefit of the stinger venom.
Within one day after the first treatment, the kidney bleeding halted. Now the coagulation time for Jackie’s blood is down to normal, and the bee treatment is temporarily stopped.
“It was painful at first,” Jackie reports, “when the stingers went in. And the first time, I was scared. I’d never been stung by a bee before.
“Mother says I should get a hive of my own but I told her I didn’t think the neighbors would like it.”
*Article courtesyÂ of Barry Haarde

Title: Birth Pills May Ease Hemophilia*
By: Dr. H. I. Herchensohn
Date:Â Unknown
Source: Unknown
Good news for hemophiliacs! Birth control pills!
Since birth control pills are used by women and hemophilia is a disease of men, this treatment raises some provocative questions.
Hemophilia is a strange disease in which men have an abnormal tendency to bleed. A small cut or the extraction of a tooth can cause a hemorrhage which may require heroic treatment. This is a hereditary condition which is passed one generation to another through females but affecting only the males.
A report comes from Turkey that two pediatricians have discovered that the use of oral contraceptives increased the blood-clotting factor in most of their patients.
Not all, most. The contraceptives were given to 22 of their patients who were from two to 13 years of age. After some months of treatment some of the patients showed a remarkable change in blood-clotting activity.
Two of them were able to have teeth extracted with no troublesome bleeding occurring afterward. Do the birth control pills make the male patients effeminate? Unfortunately, they do to some degree. All of them had some breast enlargement and two of them had changes in behavior. There is a difference in various birth control pills. Some had no effect on the patients in controlling the hemophilia.
*ArticleÂ courtesyÂ of Barry Haarde 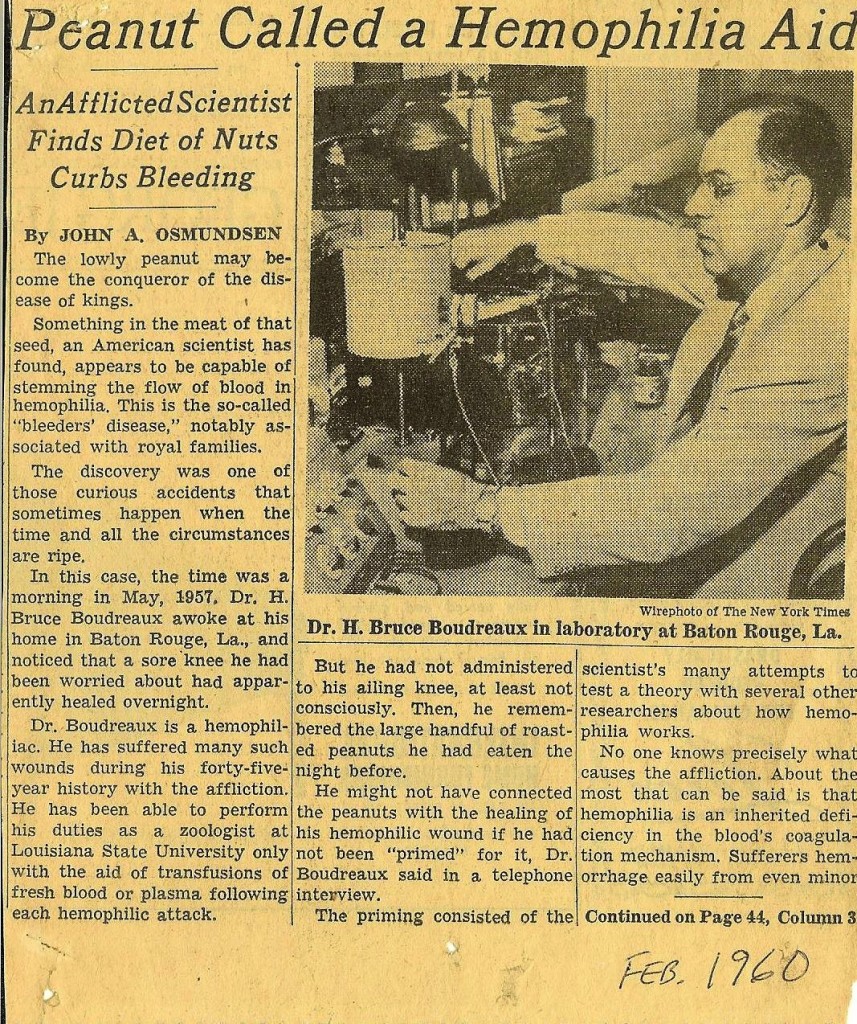 By: John A. Osmundsen
Date: 1960
Source: NY Times
The lowly peanut may become the conqueror of the disease of kings.
Something in the meat of that seed, an American scientist has found, appears to be capable of stemming the flow of blood in hemophilia. This is the so-called “bleeders’ disease,” notably associated with royal families.
The discovery was one of those curious accidents that sometimes happen when the time and all the circumstances are ripe.
In this case, the time was a morning in May 1957. Dr. H. Bruce Boudreauz awoke at his home in Baton Rouge, La., and noticed that a sore knee he had been worried about had apparently healed overnight.
Dr. Boudreauz is a hemophiliac. He has suffered many such wounds during his forty-five year history with the affliction. He has been able to perform his duties as a zoologist at Louisiana State University only with the aid of transfusions of fresh blood or plasma following each hemophilia attack.
History_Peanut Article But he had not administered to his ailing knee, at least not consciously. Then, he remembered the large handful of roasted peanuts he had eaten the night before.
He might not have connected the peanuts with the healing of his hemophilia wound if he had not been “primed” for it, Dr. Boudreaux said in a telephone interview.
The priming consisted of the scientist’s many attempts to test a theory with several other researches about how hemophilia works.
No one knows preciously what causes the affliction. About the most that can be said is that hemophilia is an inherited deficiency in the blood’s coagulation mechanism. Sufferers hemorrhage easily from even minor injuries because their blood clots so slowly.
Although hemophilia is an affliction not limited to “blue bloods,” the disorder has become associated with royalty because of the kingdoms it has invaded.
Early in this century, for example, the two sons of Alfonso XIII of Spain and Victoria Eugenie of Battenberg died of hemophilia hemorrhage.
They inherited the disease from their mother, who had inherited it from Queen Victoria of England.
The hazardous inheritance was further transmitted through Alfonso XIII’s daughter by Louis IV, Grand Duke of Hesse. The son, Friedrich, died, and the daughter, Alexandria, transmitted the affliction to her son Alexis, whose father was Nicholas II, czar of Russia.
The theory about hemophilia that Dr. Boudreaux and others have been pursuing stems from the strange way that clinical symptoms of the disease some times disappear without any apparent outside help.
An explanation for this, many scientists believe, might be that the chemical gap in the hemophilia’s blood-clotting mechanism is filled by something supplied by the diet during a hemophilia attack.

In a letter in the Feb. 13 number of Nature, the British scientific publication, Dr. Boudreaux told how he had been testing this hypothesis. He submitted the report with Dr. Vernon L. Frampton, of the United States Department of Agriculture.
In an attempt to overcome the hypothetical chemical block in his blood-coagulation, Dr. Boudreaux daily ate large amounts of such things as blood pudding, liver, raw milk, and eggs. None reduced the severity of the hemophilic attacks.
He had not considered trying peanuts before that May morning. After that he ate peanuts in many commercial forms during several hemophilia attacks, he wrote. Each time he achieved relief without other therapy.
Dr. Boudreaux and Dr. Frampton have spent the last two years testing their peanut theory on other hemophiliacs and in trying to concentrate the active factor from peanut flour. In the Nature report, the scientist tell of four hemophiliac volunteers whose symptoms were relieved for a day or two with small, repeated doses of the peanut extract.
Theory Still Tentative
Dr. Boudreaux emphasized during the telephone interview that his work was still purely experimental and that he had no laboratory evidence of how the peanut extract helped speed blood clotting in hemophiliacs. Moreover, he has been able to obtain only small amounts of the material to experiment with. Some samples of it are being tested by blood specialists here and in Philadelphia.
He and hemophilia authorities agree that the peanuts extract may fail as a treatment for the disease – just as in the past many other dietary remedies, such as sesame seed oil, corn oil and placental extract, have failed.
*ArticleÂ courtesyÂ of Barry Haarde