A Patient’s Perspective on a Fresh Osteoarticular Allograft

By: Christopher Quesenberry
Having a rare condition like hemophilia has never held me back from pursuing an active lifestyle. The demands of maintaining a high level of activity, however, ultimately resulted in joint failure. My right knee has been considered a “target joint” since I was in the fifth grade. By the time I reached adulthood, that knee was failing. Of course, there is no good time for joints to collapse, but the timing of my knee failure was less than ideal because I was also now in the middle of raising a young family. I found in myself in a quandary. Fortunately, I met Dr. James Stannard, the medical director at the Mizzou BioJoint Center at the Missouri Orthopaedic Institute (MOI). He took the time to discuss my options at length. He got to know me and what I considered a good quality of life. And he was more familiar with hemophilia than I anticipated, having performed procedures on others in the community. 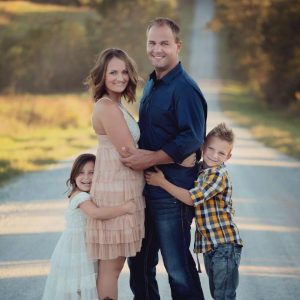 Since I am very active, both raising two small children and pursuing active hobbies like hiking and fishing, we ruled out a fusion. We also ruled out an artificial knee replacement because the longevity of such a device didn’t suit my needs. My clinical team was not optimistic that once the first artificial replacement wore down that I would be able to get another. Dr. Stannard and I agreed that my quality of life would be significantly improved if we went with BioJoint’s use of actual biological bone and tendons.
The MOI Team talked to me about the BioJoint option and what it entailed. It was going to mean a lot more work on my end, but the upside was the potential for a higher level of functionality and a much more natural joint that could last as long as 25 years, maybe even more. But, BioJoint can’t replace an artificial knee, and you can’t do either BioJoint or an artificial knee if you first elect a fusion. I needed to decide up-front which way I wanted to go, because changing the repair/replace strategy down the road was not going to be an option.
At the time of my procedure, I was 31, so I was truly hoping for “a one and done” solution. I conferred with my Hemophilia Treatment Center, and while they were a bit reluctant, they eventually offered their seal of approval. As the ones directing the hemophilia management for the operation, my HTC was looped in on everything related to pre- and post-operation plans.
When I elected to go ahead with the procedure, I was placed on a transplant list. I was told that the wait could be anywhere from 3-6 months so I would have to be a patient patient! Patience has never been my strong suit, but I bided my time and, almost exactly six months from the day I went on the list, I received the approval call. The biological materials Dr. Stannard would need for my procedure were still being screened for bacterial and viral contaminants, but once they cleared, I would need to be at the hospital and ready to go in five days. I received the surgery notification call on the Thursday right before Fourth of July weekend. Do you know how happy your HTC will be with you when you call the afternoon before a holiday weekend that you’re having a major surgery early the following week? Yes, exactly! The final prep was hard on all of us. My wife and I needed to secure childcare, as well as help with our dogs and the house, and of course, I put a lot on the HTC’s shoulders by giving them such a short window in which to devise a plan. It all worked out, and I will be forever grateful for how everyone was able to come through on such short notice for me.
Tuesday, July 7, 2015, was the day I reported to the hospital. The joint they were going to implant cleared all its tests over the weekend. I was excited and nervous. My factor levels were where they should be and everything was set to get underway. The procedure took 10 hours and in that time the team replaced my entire tibial plateau, both menisci, and six fragments of my femoral condyles (medial and lateral), critical to providing joint stability. I can remember Dr. Stannard apologizing to me the next day for having put me through such a long surgery. Those ten hours didn’t bother me in the least: they meant I could avoid multiple trips to the operating room down the road! 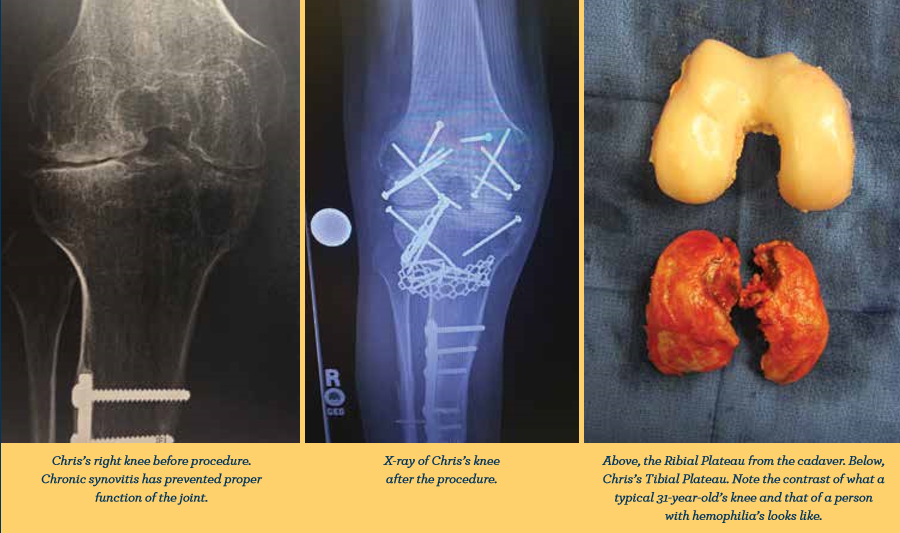 I spent four days in recovery at the hospital, attached to a Continuous Passive Motion machine for 8-10 hours each day. The CPM machine moved my knee without my having to engage the muscles around the knee. This continuous motion aids the healing process and prevents fibrous scar tissue from building up within the joint. I continued to use a CPM at home for about a month after surgery as well. My goals for my rehabilitation were to be able to re-engage my quadriceps and regain my range-of-motion. This proved more difficult than I thought. A year-and-a-half later, I continue to make progress and now I’m able to fully straighten out my knee. I am also positively increasing my flexion, or ability to bend, which is far better than it was before the surgery.
The biggest change for me has been learning to “listen” to the joint again. I do not have the same feelings inside my knee as I did before the procedure. Everything inside the joint except the patella was “new equipment” and it took some time before I got the feeling back. Even bleeds felt different, and it took some discussion with my HTC to figure out when I was having a bleed and when I wasn’t. Before the procedure, I would feel the pressure and a slight tingling of pain inside the joint; now I have to look for other signs to help identify a bleed. Before the surgery, the weakness, pain and impediments to walking with a normal gait were clues of a bleed in progress. None of those things is fun but now I needed other markers to help me determine when bleeds were happening.
In the time since my operation, I’ve gone from constant pain and 2-4 bleeds every year in my knee, to zero bleeds in my knee since earlier this year. I can’t remember the last time I had knee pain, and for the first time since high school, I can build the muscle around my joint to protect it from further injury. My right leg has always been smaller than my left as it was always injured but now my legs are starting to look similar in size and muscle mass, as the right gets stronger each day.
My follow-up x-rays were right on track, showing that the transplanted biological materials were adapting inside me so the likelihood of my needing follow-up surgeries was slim.
Now I can say I have a new life! I’m no longer sedentary and I can be the active and engaged father I’ve always wanted to be for my kids. My family and I are really happy with the positive changes in our lives after the procedure and I have not had one single regret regarding my decision to have the operation.
I am naturally very grateful to the team at the Missouri Orthopaedic Institute and the Jimmy Everest Center for Bleeding and Clotting Disorders. MOI and my HTC worked closely with me to create a path toward my health goals. I have been a patient my entire life and I have a keen understanding of what “Patient Experience” best practices look like. I can say without a doubt that my personal experience in knee replacement is exactly how the integrated framework for healthcare should look. Communication and collaboration with the patient in the center really does result in positive outcomes.