When my oldest was first born, I was part of a weekly playgroup; a group of five to seven moms that would sit around a plate of cut-up vegetables and lemonade.Â  Through a fog of sleep deprivation, we exchanged stories of introducing our babies to solid food and comparing which brand of diapers worked best.Â  While these ladies were very helpful, only one of them has remained a friend over the long term.Â  Upon reflection, I now realize that our playgroup had a pretty narrow view of motherhood – as a group of moms with newborns we didn’t have the voice of experience to help us.Â  We didn’t have the voice of the mom who had “been there, done that” to help ease us through the roller coaster ride of raising children.
Today I’m proud to say that “Infusing Love: A Mom’s View” blog roll is expanding to include more moms! We have a diverse group of ladies with a plethora of experiences who are all willing to share touching, funny and sometimes embarrassing glimpses into what being a mom of a child with a bleeding disorder has been like and what it means to them.Â  Over the next several weeks, you’ll begin to read their stories, but today, I’d like to introduce our readers to my latest group of friends and HFA’s version of a mom’s playgroup.
-Sonji Wilkes
______________________________
Emily BoyerÂ 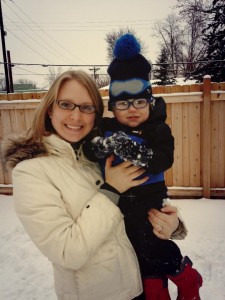 Emily is a first-time hemophilia mommy to Logan, who is two and has severe Hemophilia A.Â  In August, she will celebrate her fourth anniversary with her husband, Geoff.Â  Emily daydreams about cooking and reading books at all hours of the day. Â She loves to garden, walk, and is always searching for the perfect cup of coffee. She is a former political staffer in the Minnesota legislature, but now spends most of her days playing in the mud and reading stories.
Emily says, “Our life is messy, more often mundane, but it is perfect. Logan just turned two and we have struggled with hemophilia from the start. We are your classic, no family history story with a few twists and turns. Our diagnosis started with his circumcision and sped off into a massive brain bleed and a month long Neonatal Intensive Care (NICU) stay. We were learning the ropes of hemophilia and then we received the inhibitor results in August 2011.Â  Our battle is still waging.”
Jen Loving 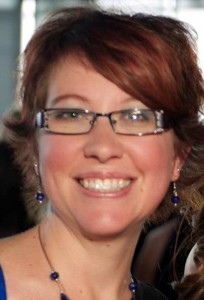 Jen recently celebrated her 19th anniversary with her husband, Joe. They have three kids, Evelyn (19), Nora (12) and Jackson (5). Jen is no stranger when it comes to advocating for her kids as both daughters have Type 1 Diabetes and her son has severe Hemophilia A.
As if raising three children isn’t enough, Jen stays busy meeting with local congressmen, serving on diabetes and hemophilia executive boards, and volunteering for all types of things. Jen uses social media to raise awareness for both chronic conditions.
Jen shares, “Having three kids with chronic illness is frustrating and trying at times.Â  I wouldn’t change it for the world. I’ve met some pretty amazing people in both communities that I am happy to call family!”
Cazandra Campos-MacDonald
Seventeen years ago, Cazandra gave birth to her first child, Julian, who bled profusely after circumcision and diagnosed with severe Hemophilia A.Â  Cazandra says she had no idea how significantly that diagnosis would change her life.Â  Julian developed an inhibitor when he was a year old, had a port place and immediately began Immune Tolerance Therapy. He had a low titer inhibitor and Cazandra and her husband, Joe, infused daily for two and a half years.Â  Julian was able to beat his inhibitor. Â Cazandra reflects, “In retrospect his hemophilia has been a walk in the park.” 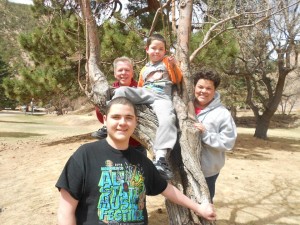 Ten years after Julian was born Cazandra had “the biggest surprise of my life…I was pregnant with my second child.” Cazandra had always assumed Julian’s hemophilia was the result of a spontaneous mutation so another diagnosis had not even been a consideration, until Caeleb was routinely tested because of the history of Julian’s diagnosis.Â  Caeleb also has severe hemophilia.Â  The brothers’ shared experience ended there: for everything Julian did not deal with, Caeleb did.Â  Caeleb is now seven years old, developed a high titer inhibitor at 11 months old, and continues to face a multitude of challenges related to this complication, including commuting from New Mexico to another state for consults with an HTC.
Cazandra explains, “When people ask, ‘How do you do it?’Â  I simply tell them “You would be surprised at what you do when you have to.'”
Juanita Fish 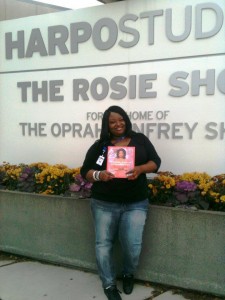 Juanita Fish is aÂ native of Detroit, Michigan and has a family history of hemophilia. She graduated Summa Cum Laude from Wayne County Community College in 2012 with an associate degree in science. Juanita prides herself on raising her teenager, Johnathan, who has moderate Hemophilia A.Â
Juanita is a lifelong learner, and strives to better understand theÂ psycho-social effects that having a bleeding disorder has on families; especially families with single mothers, like herself.
Juanita says, “I’m grateful to be able to tell my story and to learn all of the stories that I have over the years. They have benefitted me in the most meaningful of ways: I understand that my questions have been asked and in special cases even answered before. I feel at one with this community of families and am truly honored to be a part of it.”
Megan King
Megan King is a modern day Carol Brady (minus the mullet and helpful housekeeper, Alice). She has six children; three girls and three boys. Megan, her husband, Rich, and family reside in Wisconsin.
Two of Megan’s boys, Liam, (17) and Finnian, (13), have severe Hemophilia B. Megan notes, “It has been like going on a journey except you don’t know where you are actually going and don’t know what clothes to pack. A regular day that has a dance recital and a driver’s education class is suddenly a bloody nose and a race home for an infusion.” 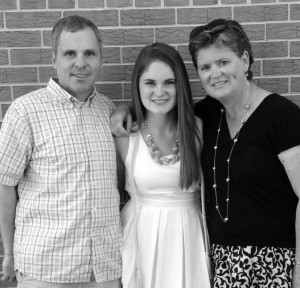 Like Cazandra, Megan’s boys have had very different experiences. Liam has had serious bleeds that have required hospital stays, while Finnian has had many complications, including discovering he has an additional platelet function defect!Â  “Why have just one bleeding issue when you can have two?!” Megan jokes.
Megan writes, “It is a journey – unexpected, sometimes incredibly disruptive and soulfully difficult. Other times it is a part of your everyday life like going to the post office and infusing before you ride your bike with friends. I am looking forward to sharing my experiences and meeting others through the blog. ‘Infusing with love’ isn’t something everyone can understand, but my fellow bleeding disorders moms can because they know they have had to do just that to keep our kids alive and healthy.”
Maryann May
Twenty-one years ago, Maryann had an unexpected, but entirely uneventful pregnancy. Two days later she found out her large, adorable baby boy, Max, had a disorder called Hemophilia. As an adopted child, Maryann had no family history to refer to, so couldn’t find out if it had started with her or was passed to her by her biological parents.Â  Like many new moms, Maryann researched about hemophilia and tried to move on. 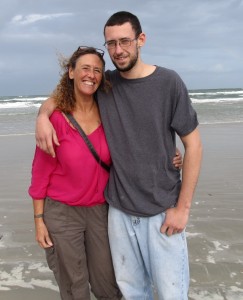 Maryann and Max love and fight like every parent and child. Maryann has been a single mom for most of Max’s life. She learned early what issues she could address and which ones to let go and hope for the best. Maryann admits to having made some pretty big mistakes, but also celebrates the huge accomplishments they have made. She promises to “tell stories that will make readers frown and ones that will make them laugh (and of course the ones that will make them cringe.)”
Maryann states, “No matter what Max does when he’s living his life, when he is with our hemophilia community — our family — he shines. He has taught me how to be assertive without being aggressive, how to advocate, how to accept the unacceptable and he has taught me the meaning of pride. He has taught me how to “roll with it,” how to drop what I’m doing and change direction. But mostly he has taught me that as long as we keep going it will be alright.”Â  Maryann hopes that her stories help other moms get to that level of comfort and understanding in raising our children with bleeding disorders.
Kimberly Haugstad 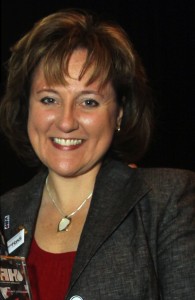 To many, Kimberly is known as HFA’s Executive Director; to Ben, (11) and Jonnie, (9), she is known as “Mom.”Â  Kimberly and her husband, Howard, became involved in the bleeding community after Ben was diagnosed with severe Hemophilia B.
Prior to leading HFA, she was heavily involved in advocacy efforts in her home state of Wisconsin and was instrumental in advocacyefforts leading to NHF’s MASAC 188, Standards of Service document. Kimberly holds a BS and MBA. Kimberly advises, “In our family, we teach and livethat bleeding disorders are family disorders. It is a balance; having all of your family actively involved in the process is really important. I think you can develop some sense of normalcy within any family, even around a condition like this by just being open and honest and making sure to spend lots of quality time with all of the children. We function better when we all come together around the condition that we have.”
“You are not alone. I encourage moms to be comfortable reaching out and being a part of the broader community. Do not be afraid to get involved and to be an advocate. Being a self-advocate is the most important thing that we can do in this community to represent our needs first and foremost.”
_________________________________
*Note: “Infusing Love: A Mom’s View,” is a blog collection of personal opinions and a representation of individuals experiences. While extensive efforts are made to ensure accuracy of the content, the blog entries do not represent HFA or its Board of Directors. The blog is also not intended to be construed as medical advice or the official opinion/position of HFA, its staff, or its Board of Directors. Readers are strongly encouraged to discuss their own medical treatment with their healthcare providers.