An Inhibitor Mom Shares Her Story With the FDA

On Monday, September 22, several members of the bleeding disorders community came out to share their experiences with bleeding disorders treatment with the FDA.
HFA worked with partners like NORD, PPTA, and NHF to ensure that our community was effectively represented.Â Patients and advocates of every age, every background, and with several different conditions came out to share with the FDA their hopes, fears, highlights, and trials in treating their conditions.Â So many great opinions were shared, coveringÂ two open-ended topicsÂ set by the FDA.Â
Below is the testimony of Debbie Porter, of Southern California. Debbie’s father passed away due to HIV/AIDS acquired by contaminated blood products, and her son lives with a non-tolerized inhibitor. Debbie shared Â before the FDA the physical and emotional complications an inhibitor causes, and their families tireless efforts to push for treatment advancements and research.Â We hope that after reading Debbie’s moving words, you will be encouraged to share your own treatment experiences with the FDA.
___________________________ 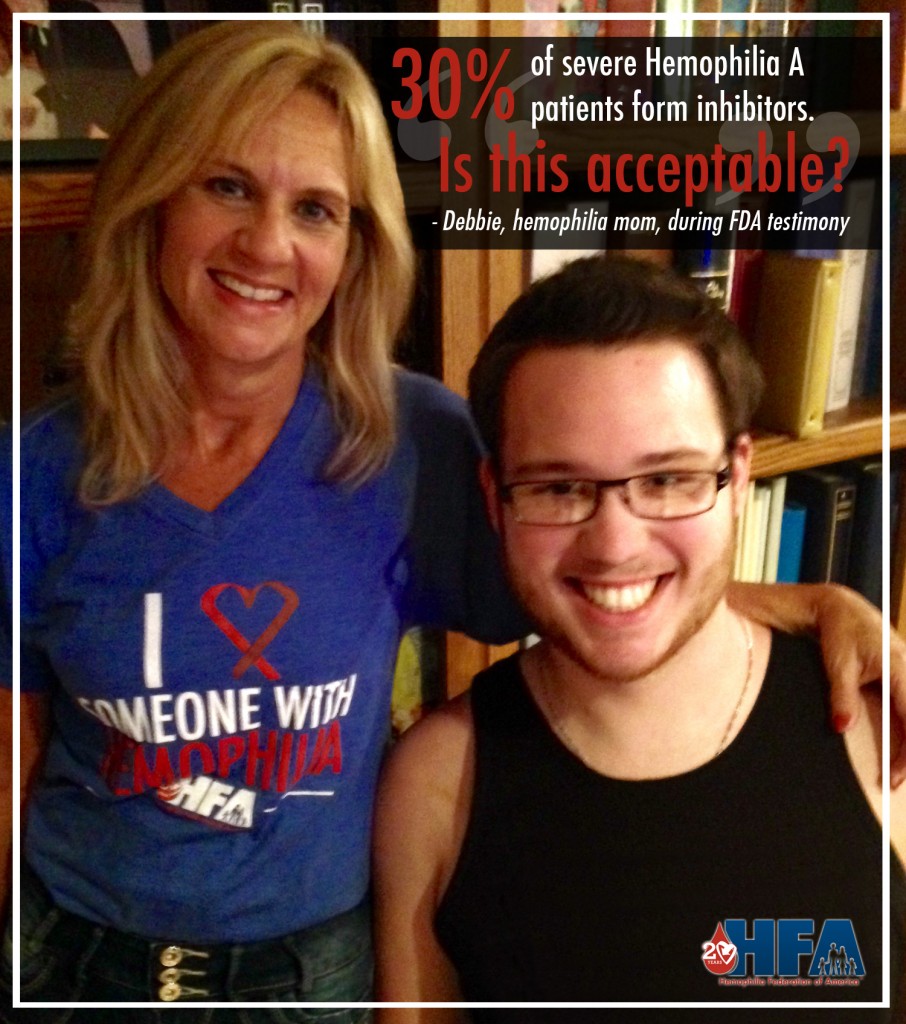 My name is Debbie Porter. I live in Southern California and have been a part of the Bleeding Disorder Community for over 50 years. My father had severe hemophilia A and passed away from complications of HIV/AIDS in 1986. I have a 20 year old son who also has hemophilia.
My son, Matthew, wanted to be here today, but is just beginning his third year of college. He wanted to share with you what his life has been like with hemophilia. He has had hundreds of bleeds and has spent a lot of time in the hospital. He has missed months from school and has received thousands of infusions of clotting factor and other medications, which are costing millions of dollars. He has endured numerous surgeries and years of physical therapy. He wants you to know that his biggest worry is that someday he may have a bleed that he would not recover from.
If Matt were here, you would see that he doesn’t walk. And you might notice that he can’t straighten his legs or use his arms that well. You would see the scars on his feet and knees and a new scar on his elbow. There are other scars that you wouldn’t see. He has suffered a lot of pain.
My son is not your typical 20 year old with hemophilia. At six months of age, he developed an inhibitor. An inhibitor is an immune reaction to clotting factor. Antibodies inactivate the factor before it can work. We knew Matt would have hemophilia even before he was born, and consulted several hematologists about the safety of clotting factor treatment. We were not warned about inhibitors. It was a big surprise and has affected his life and our family more than anything. I am grateful to have this opportunity to come here today to share my perspectives on the current treatments.
There were two treatment decisions that we needed to address after the inhibitor developed. How do we treat or get rid of the inhibitor and how could we treat bleeds?
The answer to the first question was Immune Tolerance Therapy or ITT. This is an attempt to overcome the antibodies to induce “tolerance” to clotting factor. ITT involves infusing clotting factor daily. Matthew underwent four different attempts at Immune Tolerance over a 13 year period. None were successful.
We have also tried various immune suppression agents. He has received prednisone, Cytoxan, rituximab, and Cell Cept. None of these have been very successful.
The second treatment challenge we had, was treating bleeds. At first he received Factor VIII Inhibitor Bypassing Activity (FEIBA), which sometimes worked and sometimes didn’t. There were some serious bleeds that were treated with massive amounts of Factor VIII. One bleed used almost a million units over a few days. He had a life-threatening bleed that was treated with a porcine factor called Hyate C, which worked until he developed an inhibitor to that, as well. In 1998, he began to receive Novoseven. This is a recombinant Factor VIIa. We placed a lot of hope on Novoseven, but have had inconsistent results 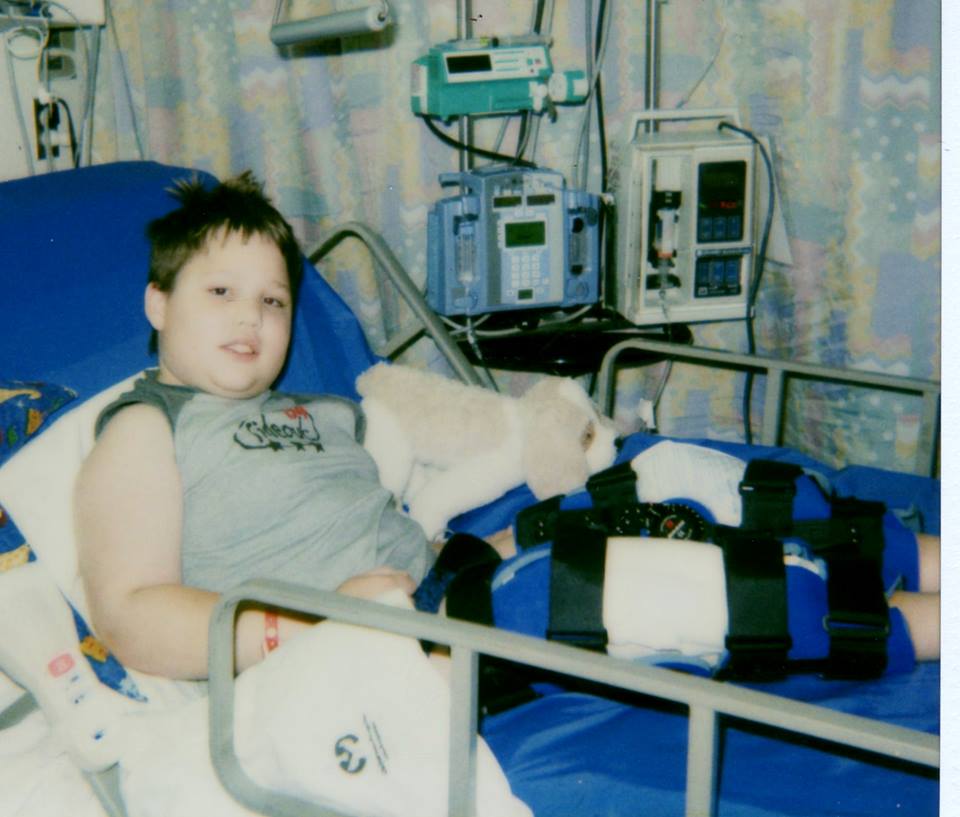 By the time Matt was only 4 years old all the bleeding began to take a toll on his joints. He developed synovitis. He had 4 radiosynovectomies, but continued to bleed almost constantly. By 8 years old, both his legs were in braces and then casts. When he was 10 years old, he had open synovectomies. These were surgical procedure that removed the synovium completely. Except for the severe pain heÂ experienced, this was somewhat of a success. The bleeding in his knees was finally stopped, however the damage so great by this point, that he has been confined to a wheelchair ever since.
For the past several years, Matt has been using the by-passing therapies, FEIBA and Novoseven in various combinations, both prophylactically and to treat bleeds. He receives an infusion of at least one of these every single day. He has gone from having 3-5 bleeds per month to having only 1 or 2; however, he is still experiencing joint damage. He had another surgery on his elbow this past year.
I was also asked to speak about some of the disadvantages of these treatments.
Immune Tolerance Therapy (ITT) is an intensive and expensive therapy. It usually requires the placement of an Internal Venous Access Device. These catheters come with risks and complications and require additional care. We had as many problems from the catheters as we were having with bleeds. ITT was very demanding. We basically scheduled our life around giving infusions. This went on for years and was really expensive. In the first 4 years of Matt’s life he used over $5 million dollars of clotting factor. We lost our insurance and struggled to find a way to get him covered. His inhibitor would fluctuate, but never went away. ITT is not successful in approximately 30% of inhibitor patients.
Now, I will talk a little bit about the current by-passing agents we use – FEIBA and Novoseven. We are very grateful to have these products, but they cannot be considered a substitute for clotting factor. They do not work the same way, have very short half-lives, and need to be given often. It usually takes multiple doses to stop a bleed and re-bleeds are common. There is no laboratory tests routinely used to titrate dosing or determine if treatment is effective. They have serious thrombosis risks if used too frequently or in too high of doses or in combination other types of medications. My son almost died from a blood clot. This is the last thing you would really expect in someone with severe hemophilia.
The costs of these medications are also very high. My son’s FEIBA is currently costing $1 million dollars per year and Novoseven is costing $5 million per year. His lifetime cost to date, for medications alone, is over $65 MILLION dollars. This seems almost unbelievable and may be unsustainable. We anticipate Matt’s costs to continue in the $6 million per year range unless something can be done to overcome his inhibitor or treat his bleeds more effectively.Â 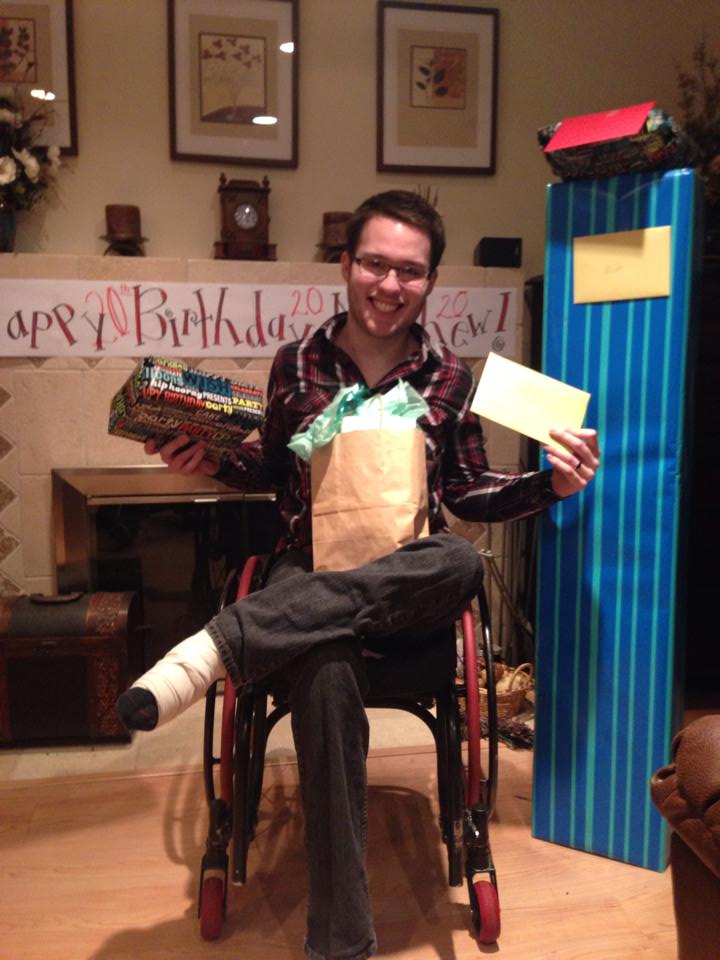 I wanted to come here today and tell you about inhibitors, because they are a serious problem. They are affecting many people and the costs associated with treatment are enormous. The World Federation of Hemophilia has identified inhibitor development as the number one safety issue associated with hemophilia treatment – even over pathogen transmission. Studies of people with hemophilia have revealed that the morbidly and mortality of those with inhibitors are greater and the quality of life is less.
When we are contemplating new treatments, I hope we address inhibitors. You have heard several stories here today from parents with children with an inhibitor and from some adults who have experienced inhibitors themselves. These are difficult stories to tell and hopefully for you to hear. We need better products, and not just different versions of the same treatments. We need more effective ways to induce tolerance. ITT in the current form is not the answer. We need stronger warnings and more detailed product labeling to make informed treatment decisions.
We also need much better surveillance. Currently, we don’t really know how many people get inhibitors and which products might have higher risks. A recent study in Europe revealed the inhibitor rate in previously untreated, severe hemophilia A patients is 32%. Think about it -1 out of every 3 patients. Is this acceptable? The risk in some patients seems to be even higher, but we are doing very little to try to modify treatment. The FDA held a workshop on inhibitors in 2003, the EMA held a similar meeting in 2006. Many additional studies have been called for that will take years to complete. I think maybe we need some new approaches.
What if, we set a goal to eliminate inhibitors within the next 10 years? If we work together, and look for solutions, I believe they can be found. Only then, will we ALL be able to participate in the dream of a better future.