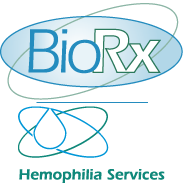 CINCINNATI, Ohio Â – BioRx announced today the launch of a new physical therapy program to help patients, physicians, physical therapists, and health insurers manage the complications and costs of hemophilia-related joint damage. The program, called REBUILD, supports a patient’s physical therapy program at the local level. Under the direction of an experienced physical therapist for bleeding disorders, Jeff Kallberg, PT, the REBUILD program works with hemophilia treatment centers (HTCs), physicians’ offices and qualified local therapists to oversee a customized physical therapy plan for each patient – while at home or away from his physician or hemophilia treatment center.
“The REBUILD program was developed to support a patient’s hemophilia clinical team,” said Kallberg. “Many patients with hemophilia are in need of physical therapy services in their local communities. Unfortunately, not every patient has access to qualified providers. In fact, about 30% of hemophilia patients don’t even receive care from a hemophilia treatment center. Those who do may see a physical therapist there once or twice a year for an evaluation. Our REBUILD program complements the HTC physical therapist by extending oversight and coordination of services in the patient’s community.”
Physical therapy is recognized as an important component of overall hemophilia management, helping to strengthen muscles and joints which can improve mobility, flexibility and balance. A physical therapy regimen can also help prevent and manage bleeds and other musculoskeletal problems, contributing to reduced utilization of costly clotting factor medication. This is even true for patients who treat prophylactically with clotting factor.
“Prophylactic infusions have been shown to decrease hemophilia-related joint destruction,” said Kallberg, “but it has not been shown to eliminate it. Over time we’re still seeing changes in range of motion, joint alignment and cartilage thickness in patients growing up on prophylaxis. Some of it can be due to poor therapy management, but other cases can appear over time from unrecognized ‘microbleeds’ or ‘sub-clinical’ hemorrhages that eventually present as pain and swelling.”
Repeated bleeding from damaged joints (called “target joints”) can result in hemophilic arthropathy, chronic pain, decreased range of motion, deformity, disability, and, in many cases, surgical intervention, including full joint replacement. Over 20% of severe hemophilia patients have at least one target joint, characterized by more than four bleeding episodes within a six-month period, or 20 during a lifetime.
The REBUILD program is geared toward the prevention of hemophilia-related joint damage by helping patients regain and maintain their physical functioning. Program components include expert hemophilia care plan oversight, trained and locally-based physical therapists, routine updates and care coordination with the treating physician, access to advanced physical fitness and training technologies, motivational drug therapy adherence, and local community training and education.
“Rehabilitating or saving the functionality of a joint can save hundreds of thousands of dollars in surgeries and pharmaceutical costs, not to mention improve a patient’s quality of life,” said Eric Hill, co-founder of BioRx. “On a local level, the REBUILD program has already demonstrated significant cost savings and quality of life outcomes. We think we can do the same nationwide.”
For more information or questions about the BioRx REBUILD program, call 866.44.BIORX (866.442.4679), email rebuild@biorx.net, or visit www.biorxhemophilia.com.
About Hemophilia and Bleeding Disorders
Approximately 20,000 people in the U.S. have hemophilia, an inherited bleeding disorder characterized by episodes of prolonged bleeding. It affects males almost exclusively. Bleeding may occur spontaneously or as a result of trauma. Von Willebrand disease is a related bleeding disorder that affects males and females equally. Some estimates put the prevalence of von Willebrand disease as high as 1% to 2% of the U.S. population. Both diseases are the result of a deficiency in or defective production of certain naturally occurring clotting factors in the bloodstream. Treatment is typically by intravenous infusion of commercially prepared hemophilia clotting factors.
About BioRx
Based in Cincinnati, Ohio, BioRx is one of the nation’s fastest growing providers of specialty pharmaceuticals and infusion services, delivering highly customized care for patients with certain rare and chronic diseases. In addition to serving the bleeding disorders community, BioRx offers pharmacy, nursing and education services to patients with hereditary angioedema, immune deficiencies, autoimmune disorders, alpha-1 antitrypsin deficiency, and nutritional/digestive disorders. The company’s clinical staff reaches patients and physicians in all 50 states. To learn more about BioRx and its products and services, visit www.biorx.com.