For the past few days, our organizations have been encouraging you to call, tweet and email your Senators to vote No on the Better Care Reconciliation Act (BCRA). Â On June 27th, Senate Majority Leader Mitch McConnell delayed the Senate vote on the bill but the vote could occur quickly if Leader McConnell is able to build enough support for the bill.
The Senate will be in recess until July 10th, which means that we have about 10 days to contact our Senators and tell them how this bill would hurt our community. Here’s what you can do to protect your access to healthcare:

Nervous about what to say? Your national organizations have come together to deliver the same message during these uncertain times. Click here for the combined issue statement from the Coalition for Hemophilia B, the Hemophilia Federation of America,Â the National Hemophilia Foundation, and the Hemophilia Alliance.
(Full text available in pdf and below) 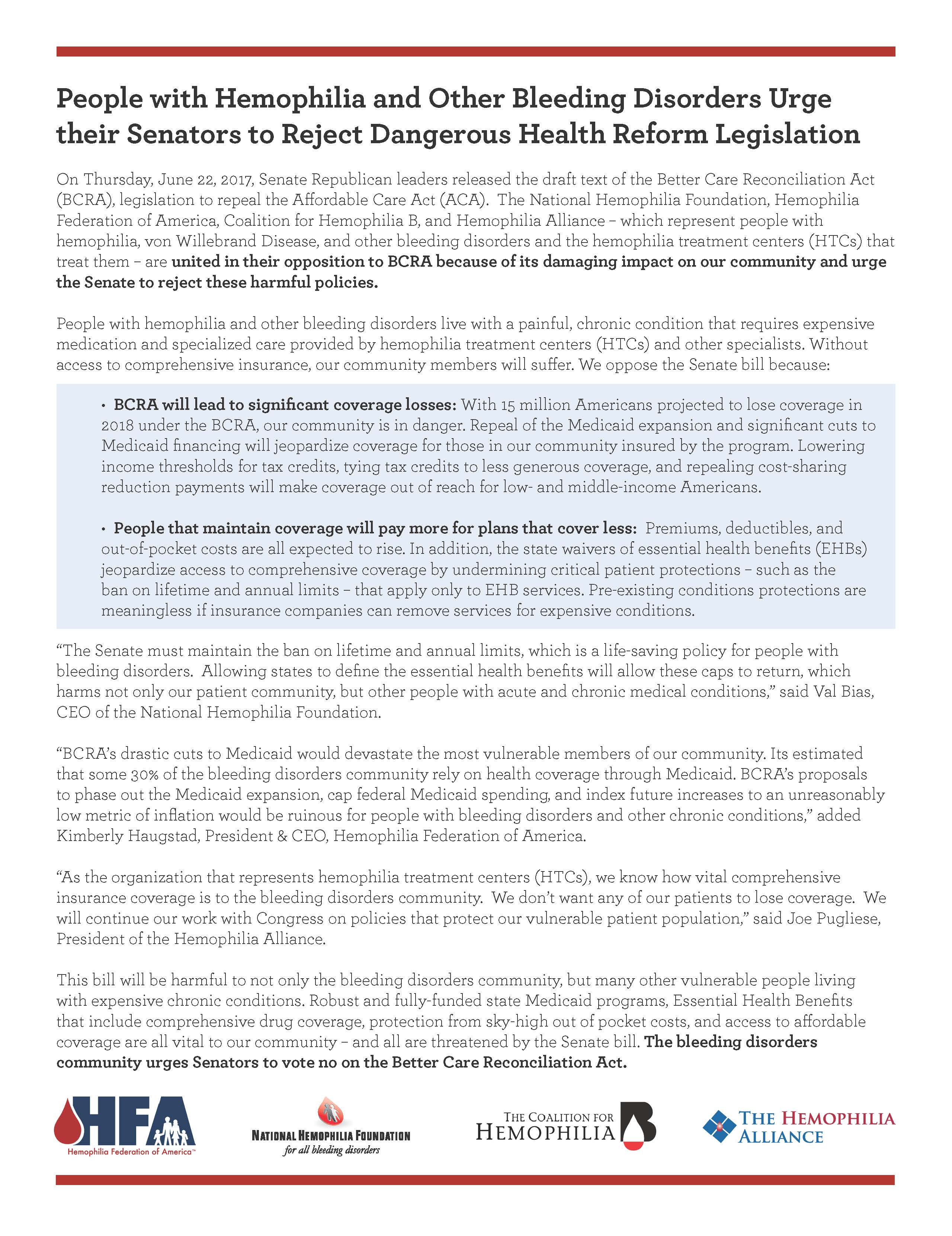 On Thursday, June 22, 2017, Senate Republican leaders released the draft text of the Better Care Reconciliation Act (BCRA), legislation to repeal the Affordable Care Act (ACA).Â The National Hemophilia Foundation, Hemophilia Federation of America, Coalition for Hemophilia B, and Hemophilia Alliance – which represent people with hemophilia, von Willebrand Disease, and other bleeding disorders and the hemophilia treatment centers (HTCs) that treat themÂ – are united in their opposition to BCRA because of its damaging impact on our community and urge the Senate to reject these harmful policies.
People with hemophilia and other bleeding disorders live with a painful, chronic condition that requires expensive medication and specialized care provided by hemophilia treatment centers (HTCs) and other specialists. Without access to comprehensive insurance, our community members will suffer. We oppose the Senate bill because:
â€¢ BCRA will lead to significant coverage losses: With 15 million Americans projected to lose coverage in 2018 under the BCRA, our community is in danger. Repeal of the Medicaid expansion and significant cuts to Medicaid financing will jeopardize coverage for those in our community insured by the program. Lowering income thresholds for tax credits, tying tax credits to less generous coverage, and repealing cost-sharing reduction payments will make coverage out of reach for low- and middle-income Americans.
â€¢ People that maintain coverage will pay more for plans that cover less: Premiums, deductibles, and out-of-pocket costs are all expected to rise. In addition, the state waivers of essential health benefits (EHBs) jeopardize access to comprehensive coverage by undermining critical patient protections – such as the ban on lifetime and annual limits – that apply only to EHB services. Pre-existing conditions protections are meaningless if insurance companies can remove services for expensive conditions.
“The Senate must maintain the ban on lifetime and annual limits, which is a life-saving policy for people with bleeding disorders. Allowing states to define the essential health benefits will allow these caps to return, which harms not only our patient community, but other people with acute and chronic medical conditions,” said Val Bias, CEO of the National Hemophilia Foundation.
“BCRA’s drastic cuts to Medicaid would devastate the most vulnerable members of our community. Its estimated that some 30% of the bleeding disorders community rely on health coverage through Medicaid. BCRA’s proposals to phase out the Medicaid expansion, cap federal Medicaid spending, and index future increases to an unreasonably low metric of inflation would be ruinous for people with bleeding disorders and other chronic conditions,” added Kimberly Haugstad, President & CEO, Hemophilia Federation of America.
“As the organization that represents hemophilia treatment centers (HTCs), we know how vital comprehensive insurance coverage is to the bleeding disorders community. We don’t want any of our patients to lose coverage. We will continue our work with Congress on policies that protect our vulnerable patient population,” said Joe Pugliese, President of the Hemophilia Alliance.
This bill will be harmful to not only the bleeding disorders community, but many other vulnerable people living with expensive chronic conditions. Robust and fully-funded state Medicaid programs, Essential Health Benefits that include comprehensive drug coverage, protection from sky-high out of pocket costs, and access to affordable coverage are all vital to our community – and all are threatened by the Senate bill. The bleeding disorders community urges Senators to vote no on the Better Care Reconciliation Act.Â