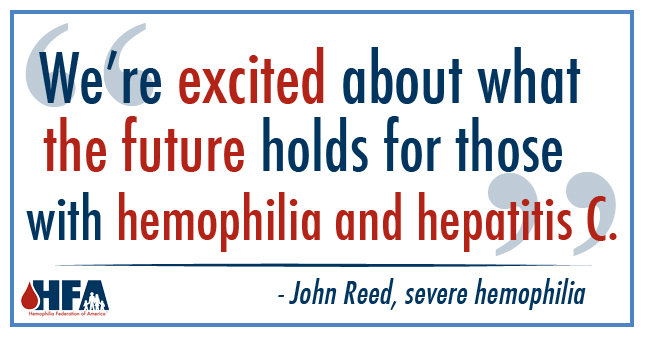 Hepatitis C (HCV), often referred to as the “silent killer”, has been a serious crisis for the bleeding disorders community, who contracted the disease from contaminated blood products prior to the early 1990s. Treatments exist, but with many difficult side effects and mediocre efficacy. However, advocacy in the bleeding disorders community has contributed to the current availability of new treatments and the likelihood of additional therapy improvements.*
Mark Antell and John Reed are two men living with hemophilia and HCV. Read their personal experiences of enduring older treatments, advocating for better access to therapies, and finding success with newly available treatments.
Note: This article is not intended to be construed as medical advice or the official opinion/position of HFA, its staff, or its Board of Directors. Patients are strongly encouraged to discuss their own medical treatment with their healthcare providers.

Why has HCV treatment been difficult in the past?

John: As a very involved patient, I have seen firsthand innumerable horror stories of treatments involving PEG and RIBA. These treatments did not work and put people through the most horrific side effects we have seen in a long time. As a pharmacist and a patient, it was disheartening to me that we had no better alternatives to offer. I was like most people in the hemophilia community, “waiting on a new drug”– until such time that I could wait no longer.
Mark: I tried Interferon and RIBA ‘therapy,’ an experience which was among the worst in my life. Not only was it unsuccessful, but shortly thereafter I experienced several transient but acute attacks of liver inflammation that caused oedema, ascites, and bleeding varices. Knowing that advancing hepatitis threatened my survival as well as that of others in similar circumstance, I became an advocate, and with Paul Brayshaw (then HFA President) created an informal group (People with Bleeding Disorders and HCV) to lobby against barriers preventing the most rapid possible development and availability of improved HCV therapy.

How did you proceed with advocating for better access to HCV therapy?

Mark: In 2009, the standard medical advice for almost anyone with HCV was treat–treat now. But the personal reports from our community mirrored my own: high rates of therapy failure, and nasty side effects followed by rapid progression of disease. Not only were better treatments needed, but for those with advanced HCV, they were needed now.

And what were your plans and goals?

Mark: Our first goal was inclusion of people with bleeding disorders in clinical trials of advanced HCV therapies. Until recently, members of our community were often excluded. Even when allowed to participate, requirements for liver biopsy –a dangerous procedure for us– were dissuasive. Knowing the importance of a united community voice, we focused on buy-in from HFA and the National Hemophilia Foundation (NHF), on a petition to FDA requesting focus on our need for better therapy. FDA called a hearing on the matter, which resulted in their removing exclusionary language from their clinical trial guidance.
We also joined coalitions with similar charges, one of which successfully lobbied Congress to change FDA enabling law to encourage expedited availability of ‘breakthrough therapies’ when patients have poor medical options and desperate need. This change has led to/ resulted in rapid progress in development and approval of better HCV therapy.
Next, we pushed for a large clinical trial for our community. One company developing a product with a good safety/efficacy profile agreed to sponsor a trial, and about a dozen Hemophilia Treatment Centers signed on to participate. Over 100 people with bleeding disorders are now taking otherwise unavailable advanced therapy.

Can you share more about the latest HCV drugs?

John:Â Promising combinations on track for year-end or early next year release include:

How have you personally been affected by these new therapies?

John: Last October, I received bad lab results showing that I had Stage 4 Cirrhosis. I actively started pursuing new treatments that were due to be approved by year-end. In January, I had a FibroScan, which is a test that is far more accurate than the standard blood test for HCV progress (some feel it may be as accurate as a biopsy). It revealed that my liver was in much better shape than I had first thought. Nevertheless, I still sought active treatment. By spring, my physician and I had settled on Sovaldi/Olysio as a treatment regimen and sent all the gathered paperwork we had, not only on effectiveness, but also cost benefit. I finished up in July after 12 weeks; I am now Hepatitis free and show few side effects. Mark started this therapy in May after an attack of bleeding varices. His positive treatment experience is similar to mine. Had it not been for the work of patients like Mark and Paul, advocating not only for ourselves but others, I do not know if any of us would have been in a situation to take advantage of these new treatments.

Any lessons? How do you view the future of HCV for people with hemophilia?

Mark: Advocacy for yourself and family is powerful. It is important as well to learn and work with a community of people with similar issues. Persistence is necessary. Most of the leads we pursued did not work out.
John: We are excited about what the near future holds, and have made a commitment to ourselves to try and make sure that everyone in the US with hemophilia has a chance at a cure over the next two years. We feel this is a reachable and reasonable target. We want to thank HFA in advance for their support on this project.
* On October 10 2014, theÂ FDA approved Harvoni, the first once-a-day pill to treat the hepatitis C (HCV) genotype 1 infection.Â Â Click here to read more.Â
**A promising trialÂ was recently announced that specifically includes individuals with bleeding disorders that isÂ recruiting or will soon be recruitingÂ in the following cities: Sacramento, San Diego, San Francisco, CA; Washington, DC; Atlanta, GA; Boston, MA; Minneapolis, MN; Newark, NJ; New York, NY; Rochester, NY; Chapel Hill, NC; and Philadelphia, PA. Now is the time to talk to your provider about this trial. Click here to learn more.
________________________________________
Mark Antell has hemophilia A. He serves as the Co-Vice President of the HFA Board of Directors and is a Principal in People with Bleeding Disorders and HCV.
John Reed is a pharmacist with hemophilia A who serves as the Co-Chair of the HFA Blood Brotherhood Committee. He is also a Principal in People with Bleeding Disorders and HCV.