How a Second Grader with Hemophilia Copes with Pain 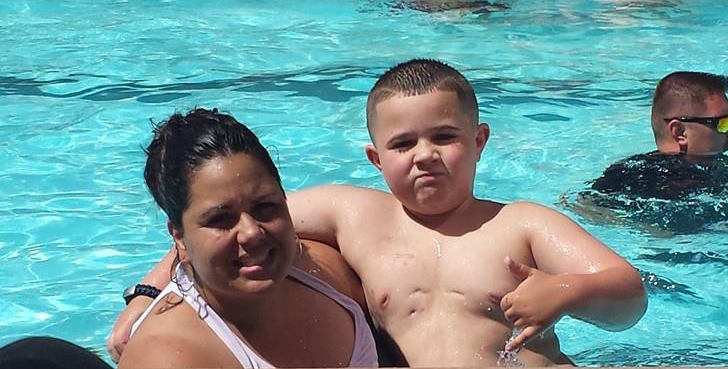 Kelly and Brian of Oregon never expected their son, Bubba, to have severe hemophilia A, and they certainly never expected Bubba to experience the complications of an inhibitor and chronic pain in his childhood. Kelly shared her family’s experiences with HFA with hopes that other families can learn from their experiences.

How did you find out about Bubba’s diagnosis?

After nineteen hours of labor, Bubba turned sideways in the birth canal and was stuck, so I had an emergency C-section. Afterwards, I remember looking him over and over and he appeared perfect until a nurse came in took off his beanie hat. I remember thinking, “What’s wrong with his head? Are those bruises? Is that swelling?” In that moment I believe the nurse was thinking the same thing, as she immediately took a measuring tape out of her pocket and measured Bubba’s head. The look she had on her face was pure terror. Without saying another word she rushed Bubba away from me and down to the NICU. I knew whatever was going on was not good. All I could do was cry.
It seemed like hours before a doctor came back to let me know what was going on. The nurses just kept telling me that Bubba had suffered a skull fracture, that his head was swelling and they were trying to stop the swelling and figure out what was causing it. Finally, a doctor came in and that an MRI showed a skull fracture and a Subgaleal Hematoma and that he was going to need a blood transfusion. From that point on, our lives were flipped upside down. It was like a nightmare I could not wake up from. Finally on day three they were able to determine Bubba had severe hemophilia A (no family history). Bubba then spent the next seventeen days in the NICU fighting for his life. 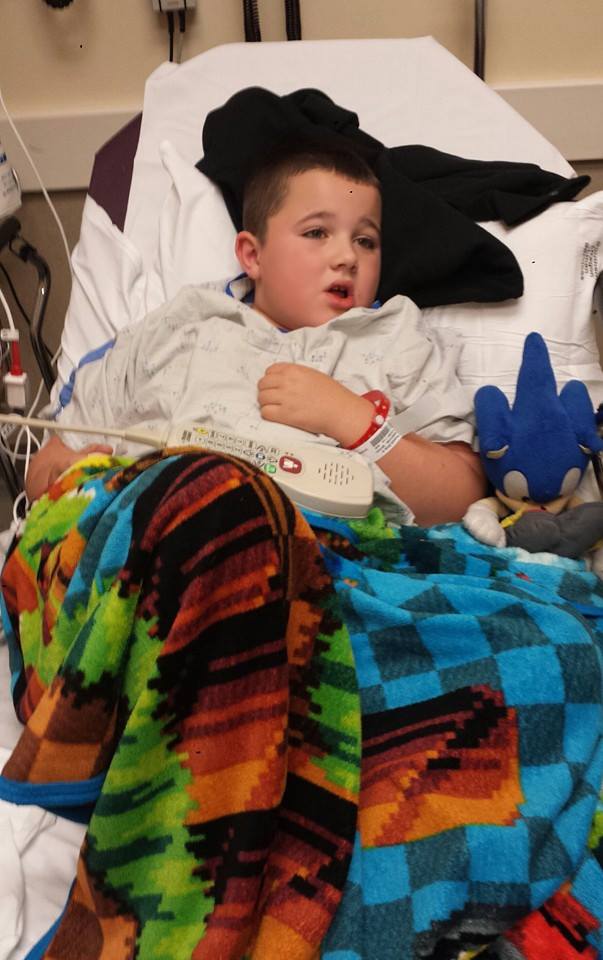 When Bubba was 10 months old, we made the four hour drive to our HTC and they prepped Bubba for port surgery. Right before they were going to take him back, his hematologist told us we were not going to be able to do the surgery that day. We were confused and asked why? The dreaded words: high titer inhibitor came out of his mouth. Brian and I had no idea what an inhibitor even was. Even after he explained it, I was still confused. His first port was then placed two months after his first birthday.

When was the first time Bubba had to deal with pain issues? What helps make him more comfortable? How well does it work?

Bubba has developed target joints in both of his ankles. He usually has a bleed every seven to ten days. Bubba requires large amounts of clotting factor to stop bleeds and that comes with side effects. He has suffered serious complications from receiving large volumes of factor such as blood clots and a possible mini stroke. Sometimes people don’t think about other consequences that can occur from hemophilia and using factor products.
I think Bubba had significant pain in his ankles very early. I remember many nights holding him and rocking him when he was little when he was little and could not communicate his pain level, but would be fussy and would not eat; I could not soothe him, and Tylenol/RICE would not work. We would give factor, but then I would still have to stay up with him either rocking him, singing to him, rubbing his back, giving lavender baths, playing music from the radio. As he got older we would watch movies, give him hand held games, play board games, or my husband and I would just be goofy, and would sing and dance for him. Distraction! Distraction! Distraction! As Bubba started to grow older, the pain in his ankles became excruciating for him. I felt like every other weekend we were in the ER because we could not control the pain. My usual, smiling, happy son would be crying and screaming “Mommy, why, why, why is this happening to me? Mommy please makes it stop.” By the time we got to the ER his blood pressure was just through the roof, he would get IV pain meds and a narcotic prescription to go home with.

How much have your doctors and other providers talked with you about pain management?

During a comprehensive visit when Bubba was 5 years old, Brian and I decided we were going to come up with a plan to get Bubba’s pain under control. The physical therapist was able to show us that Bubba was losing range of motion in his ankles, and it was getting worse at every six-month check-up. The physical therapist recommended insole orthotics to support Bubba’s ankles and hopefully cut down on the bleeding. He has had so many bleeds in those ankle joints that the blood has started to erode the bone, causing deformities, chronic inflammation, bone marrow edema, and osteoarthritis. In the morning when Bubba gets out of bed he looks like an old man. He is stiff, has numbness, and pain. We know that the numbness is probably due to neuropathy and we are scheduled to see the pediatric neurologists again.
Another more preventative option we looked into was aqua therapy. Bubba absolutely loves it! This strengthens those muscles is a safe way, increases flexibility and gives him something to look forward to. 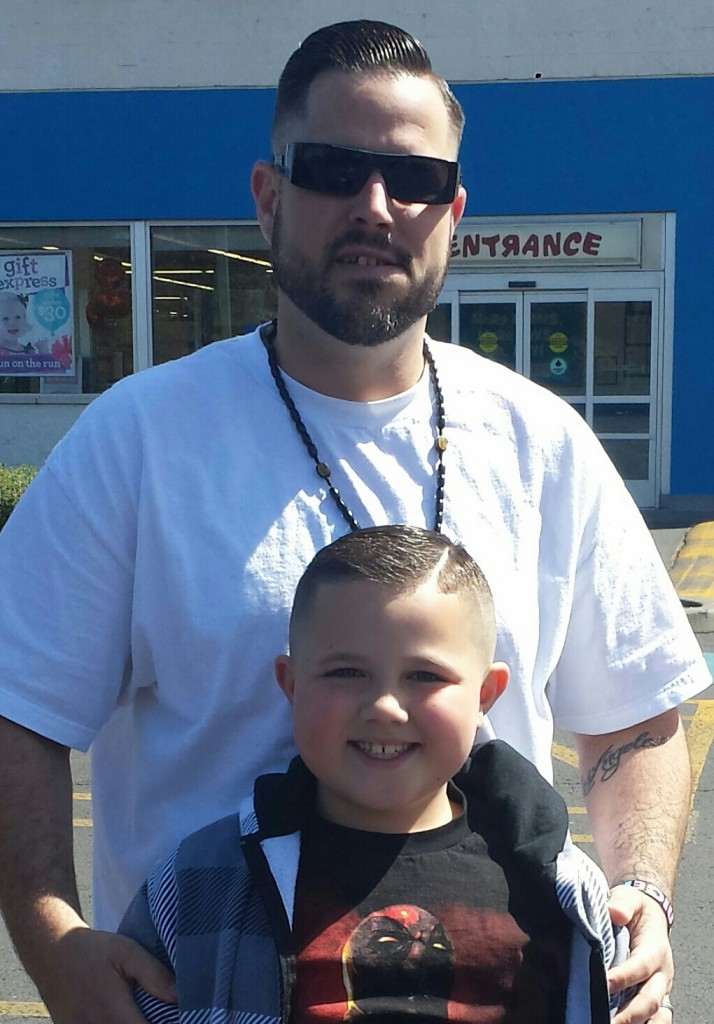 Bubba has anxiety over pokes. This is hard because at the very minimum he gets a poke every day. We always use numbing cream, which I’m not sure it even numbs the site anymore, but we continue to use it because it comforts him. I always tell him step by step what I’m doing before I do it. I never lie about the pain. If I see a hematoma over the port, I let him know what to expect. I also always let him yell or scream after we are done. We often make up “funny” bad words to call the port or the needle. I just always want him to be able to identify what he is feeling and put words to it. Emotional health and development is just as important and any other type of development.
Honestly, its all about giving him as much control as possible, being open and honest about what is going to happen and letting him express his anger, sadness, and frustration over it.

How does Bubba talk about/ describe his pain?

Bubba is not always forthcoming with his pain, as he does not want to have to stop playing, or going to school, or whatever activity he is engaged in. Is he grumpy for no reason? Is he walking funny? Is he grinding/clinching his teeth? Is he not using the body part in question? If Bubba does tell us that something is hurting that usually means he is already in a lot of pain. When pushed he will say that his ankle feels, heavy, tight, like its bubbling or popping. We can also visually see the swelling; it’s hot to the touch or sometimes even red. Bubba will also use both the face scale and the pain scale; however he uses his own pain scale that is 1-5 and instead of the regular faces he asks if he can draw the way he is feeling.

What advice do you have for other parents whose children are facing pain?

Be proactive and start with prevention. Joint bleeds appear to be the most painful, so find a way your child can safely build strength, balance and flexibility. If your child starts having chronic bleeds get consultation immediately on what you can do to minimize the bleeding. One joint bleed is one too many. When your child says he or she is in pain, listen!
Also, get to know your child’s pain level and how they show pain so you can act accordingly. Research both the physical and emotional effects that narcotics and non-steroidal inflammatory can have on your child. And don’t be afraid to ask for a second opinion.

Kelly Pintarelli lives in Southern Oregon with her husband Brian, eight-year-old son, Bubba and two Boxer dogs, Nubz and Zeva. Bubba is in 2nd grade and has Severe Hemophilia A with High titer inhibitor.