Erik von Willebrand, a Finnish physician, noticed several young girls in one family shared symptoms of a bleeding disorder. The year was 1924, and von Willebrand recognized that the girls’ symptoms were different from those of someone with hemophilia, a disease mostly affecting males. He called this new disease pseudohemophilia, or false hemophilia, but others later attached his name in acknowledgment of his important discovery.
Von Willebrand disease, or VWD, is a genetic bleeding disorder affecting the blood’s ability to clot. It occurs in both men and women and can be passed on by either parent to their children. Often it happens in families in which many family members may have bleeding symptoms and may simply have been called “free bleeders.” It is also possible for VWD to appear in a person who has no family history of bleeding. Having VWD results in lifelong symptoms ranging in severity from minor and annoying to life-threatening.
Symptoms of VWD often appear first in childhood but the disorder is not always diagnosed until later in life. Bleeding in the nose and mouth, excessive bruising, and bleeding that is difficult to stop after an injury or surgery are all early signs that someone may have VWD. A person may reach his or her teen years or adulthood without doctors properly diagnosing the problem. Identifying VWD in women most often happens when it causes major bleeding after surgery or childbirth, however there are clues that can aid in early detection:

Most women and girls with VWD experience heavy periods that can include bleeding for more than seven days, flooding or gushing blood, passing clots larger than a quarter, or having the need to change a pad or tampon every few hours. Women with these menstrual symptoms should be 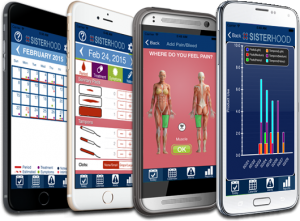 tested for VWD and other bleeding disorders if they also have a family history of bleeding, additional bleeding symptoms themselves, or anemia. The Centers for Disease Control (CDC) website, www.cdc.gov, offers a questionnaire designed to help women with heavy periods decide whether they should be tested. HFA has developed an app that is available for download on mobile devices to help women keep track of their bleeding and accurately communicate about it with their doctors. Men may likewise be diagnosed with VWD after injury or surgery. They may also be misdiagnosed as having hemophilia, however, which can lead to ineffective treatment.
To make a diagnosis of VWD, a doctor will need to perform a number of standard blood clotting tests, possibly including prothrombin time (PT), partial thromboplastin time (PTT), fibrinogen, and platelet function analyzer (PFA) tests to rule out other disorders.
Tests for von Willebrand factor (VWF), the specific protein that is deficient or defective in people with VWD, must also be performed. These tests typically include:

If any of these tests is abnormal, additional testing will be required to determine the type of VWD present in the patient, helping doctors decide the best course of treatment. On occasion, tests may need to be run more than once to be certain that VWD is present because test results may change over time. Tests specific to VWD are not available at all doctors’ offices and hospitals. To find out where testing can be done, a doctor or patient can contact a hemophilia treatment center or a local hemophilia organization.
Once VWD is diagnosed and the type is known, a treatment plan can be made. There are three major types of VWD. About 85% of people living with VWD, have Type 1 VWD, caused by having too little VWF. Type 2 VWD is caused by the body’s production of abnormal VWF. Type 3 VWD is caused when VWF is totally absent. Type 3 VWD is rare, affecting only about 3% of people with VWD, and causes more severe symptoms, sometimes including bleeding inside the joints.
At the moment, two treatments exist for VWD. Desmopressin, or DDAV, is a drug often used to treat VWD. It can be dispensed as a nasal spray, often done to ameliorate the effects of a heavy menstrual period, or intravenously for a longer lasting effect. It is typically used to control most bleeding that occurs in people with Type 1 VWD. For post-surgical bleeding that requires extended and stronger control, and for most bleeding in Type 2 and Type 3 VWD patients, concentrated VWF is administered intravenously to replace the defective or missing VWF.
With early diagnosis of VWD, treatment can be given to prevent bleeding and allow any surgical or dental procedure to be done with minimal adverse effects. It is important that every doctor and dentist know that a patient has VWD before any procedure is undertaken and that a doctor with experience withÂ VWD prescribe the appropriate treatment. The weakening, fatigue and other disruptive effects of VWD can be stopped. Even childbirth can be made safe for a mother and baby. If you have unexplained bleeding symptoms, remember to ask your doctor, “Could I have von Willebrand disease?”
Connie H. Miller, PhD, has studied genetic and laboratory aspects of von Willebrand disease and hemophilia for 40 years. She has recently retired from the Atlanta Centers for Disease Control and Prevention’s National Center on Birth Defects and Developmental Disabilities’ Division of Blood Disorders and continues to work as a consultant to that group. She can be reached by email at cmiller2@cdc.gov.