Mother is a carrier 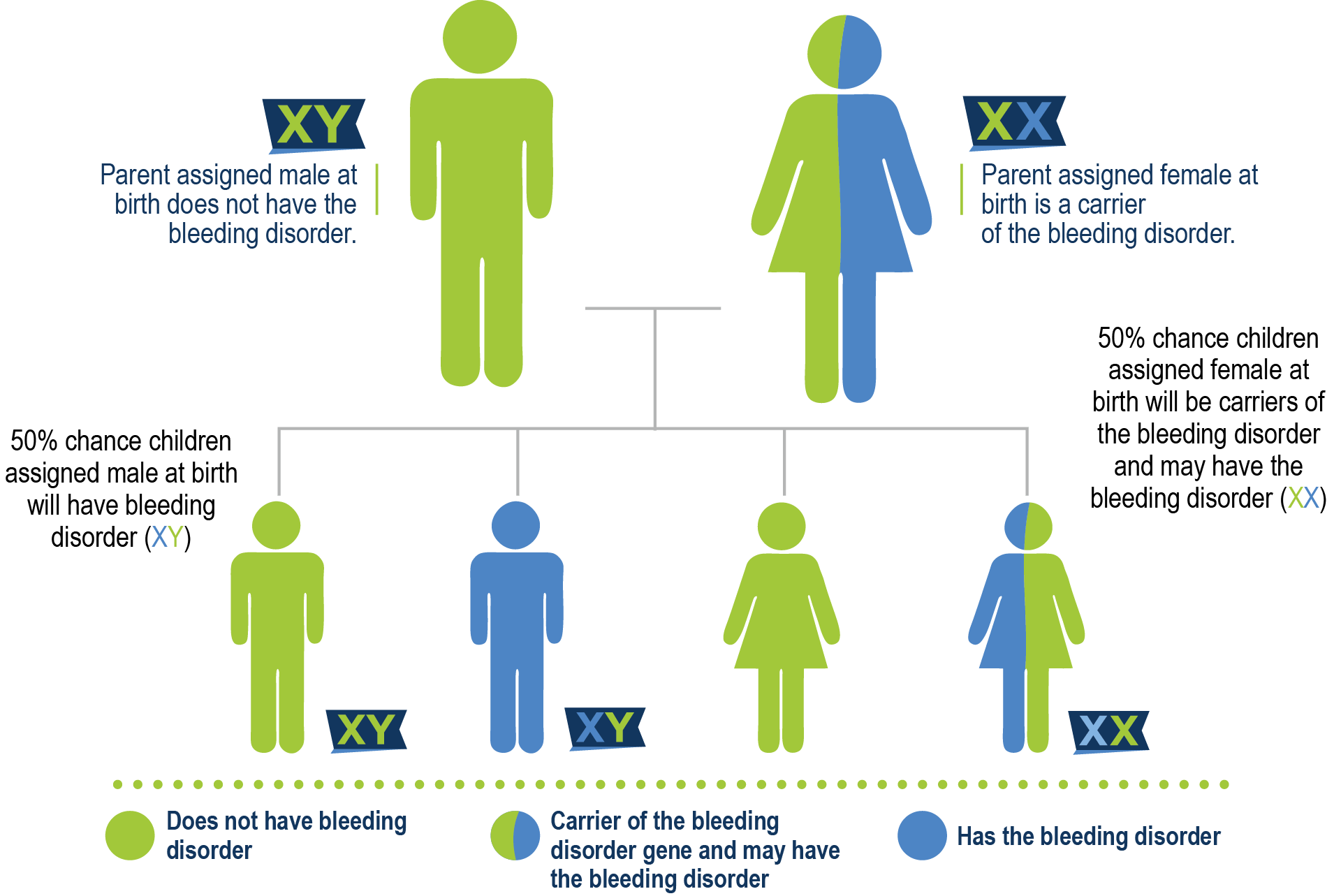 Father has hemophilia B 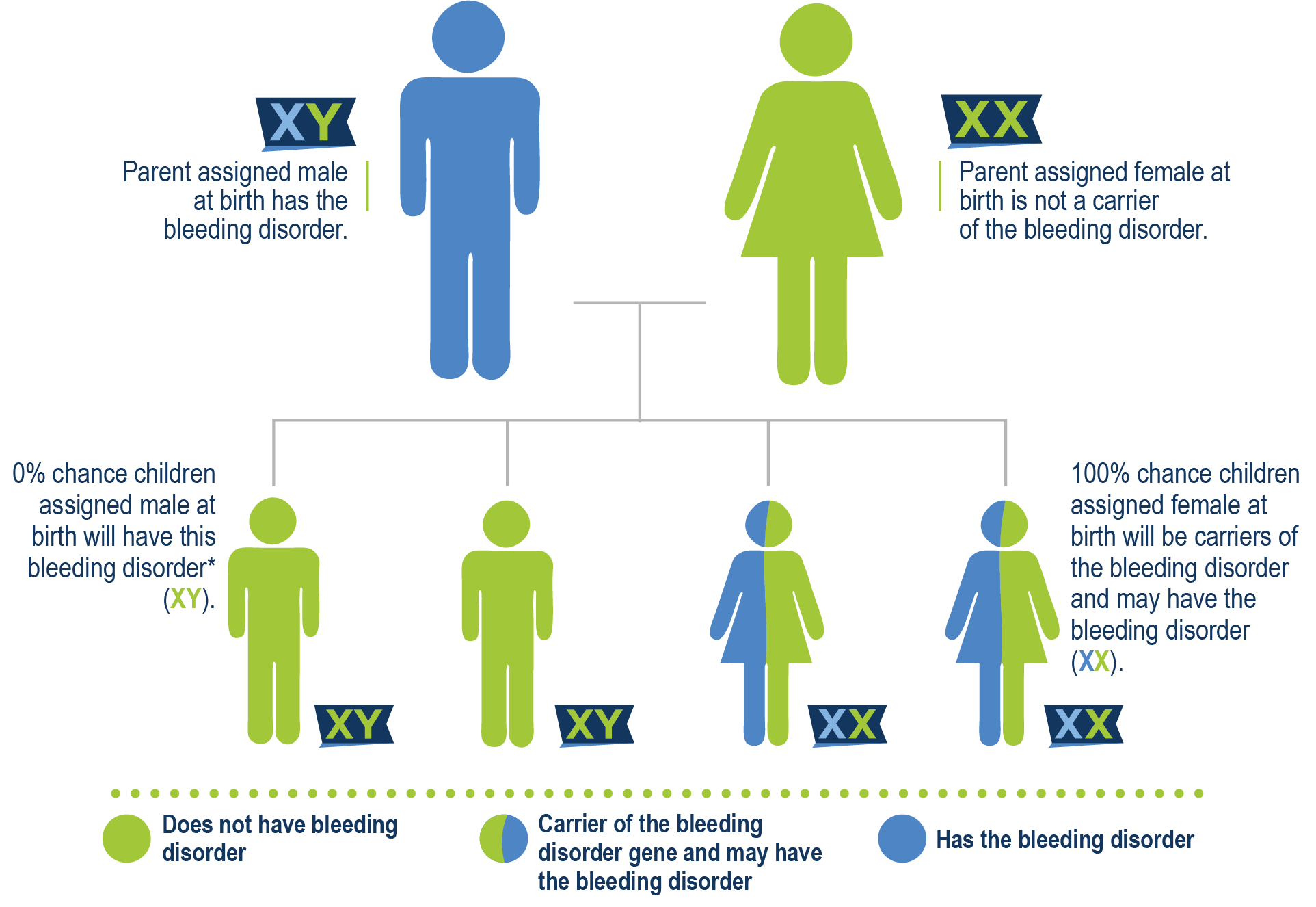 Mother is a carrier and father has hemophilia 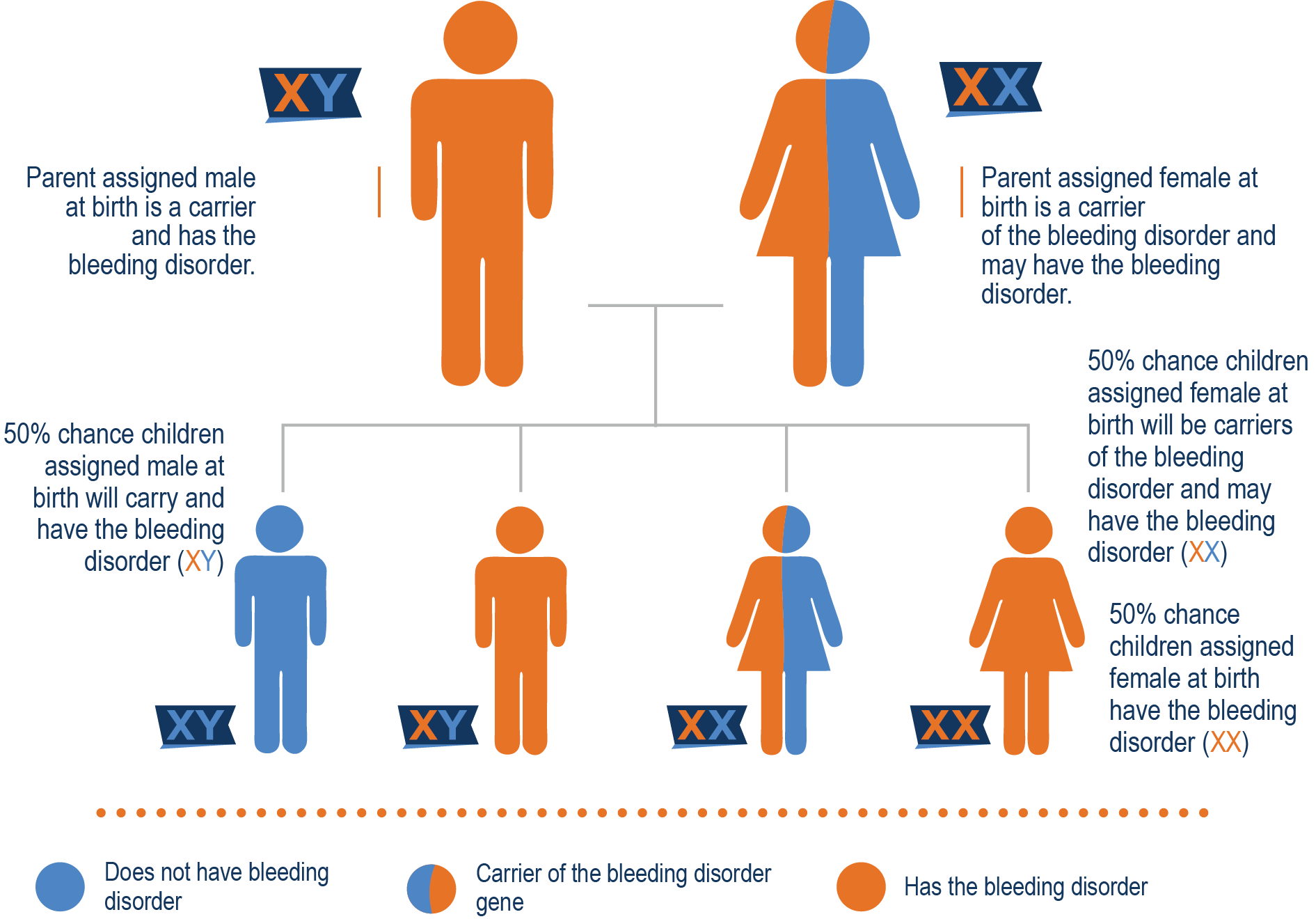 Symptoms & Diagnosis
If you have hemophilia B, you likely bleed longer than someone without hemophilia; you can bleed internally or externally. People with hemophilia B do not bleed more than people without hemophilia, they just bleed longer. The most common sites of bleeding are into the joints and muscles. Baby boys with no family history are often diagnosed when they are circumcised. Other bleeding problems usually show up when babies start crawling and walking. However, if you have mild hemophilia B, you might not be diagnosed until much later in life, possibly after a physical trauma or a surgery.
Diagnosis & Treatment

If you exhibit any of these symptoms and are not diagnosed, you should pursue a diagnosis. Ask your health care provider to refer you to a hematologist, who will order a series of tests called a coagulation study. If you are diagnosed with hemophilia B, you should meet with the HTC or a genetics counselor to determine who else in your family could be affected. You can also request genetic testing so that you know your specific genetic mutation. For more information on who might be affected, please click here.

A coagulation study to diagnose hemophilia B might include the following:

A mother who has a son with hemophilia B and who has no family history of the condition may or may not be a carrier of hemophilia, depending on where the genetic mutation occurred. A mother who has a son with hemophilia B should consider having her DNA tested for her son’s genetic mutation to see if she is a carrier of hemophilia. She may have low FIX levels herself, but just having a low FIX level is not diagnostic of being a carrier. However, that information could be critical in her well-being in cases of surgery or severe trauma. The genetic information may be important when planning subsequent pregnancies and may be necessary to share with other female family members who are thinking of having children.

Severity of hemophilia B refers to the amount of clotting factor that is present a person’s blood. People with severe hemophilia tend to have more frequent bleeding, while people with mild hemophilia may only bleed with significant trauma, dental procedures, or surgery. There are exceptions to this, and not everyone bleeds “by the numbers.”

The current, most-used treatment for hemophilia B is factor replacement therapy. This is done by infusing (giving the medication into a vein) a FIX product into the affected person. When you infuse FIX concentrate, the FIX is immediately available in the bloodstream, and your body can use it to stop or prevent the bleeding. Some bleeding may be successfully treated with aminocaproic acid, often most useful for mouth bleeds, or tranexamic acid, also useful for excessive menstrual bleeding. Both of these medications can be given orally.

You can learn to administer FIX concentrates (to yourself or your child) at home at the first signs of a bleed or for preventive care (which we call prophylaxis, or “prophy”).

Gene therapy is now available for hemophilia B. To learn more about gene therapy, visit the Current, New, and Emerging Therapies course in HFA’s Learning Central (located in The University section). For more specific information, speak to your provider.

Inhibitors are antibodies that the immune system develops because it perceives the infused factor IX as a foreign substance that needs to be destroyed. Antibodies are proteins that eat up the FIX before it has time to stop the bleeding. About 3% of those with hemophilia B are affected by inhibitors. Inhibitors usually occur between the ninth and 50th infusion of factor concentrate, but in rare cases can also be developed later in life.

What are the symptoms of an inhibitor?

Inhibitors destroy the infused FIX, as well as the FIX produced naturally by the body in people with mild and moderate hemophilia. If you are treating a bleeding episode, following your current treatment protocol, and the bleeding is not getting better, or may actually be getting worse, this is a key sign that an inhibitor may have developed. A person who doesn’t have an inhibitor will heal from injuries or feel better after the FIX is infused, or their treatment plan is completed. Those with hemophilia B who have an inhibitor are at higher risk for an anaphylactic reaction when exposed to FIX.

How are inhibitors detected?

Anyone with hemophilia B should be tested for inhibitors regularly, at least once per year. Testing is a simple blood draw that determines if an inhibitor is present. The inhibitor level is called an inhibitor titer, and that indicates the severity of the inhibitor. The two tests used are called the Nijmegen-Bethesda Assay (NBA) and the Bethesda assay (BA). The NBA titer is measured in Nijmegen-Bethesda units (NBUs), and the BA titer is measured in Bethesda units (BUs), but many doctors will refer to “BUs” regardless of which test is used.

Are all hemophilia B inhibitors the same?

No. Inhibitors come in different degrees of severity. Inhibitors are classified as follows:

High Titer: When the level of inhibitors found in the blood is greater than 5 BU. The number, and therefore strength of the inhibitor, is high. People with a high-titer inhibitor get no benefit from FVIII, no matter how much they infuse.

If you or your child are diagnosed with an inhibitor, your hematologist will likely want you to not infuse for 48 hours to check your BU assay.

An anemnestic response is renewed rapid production of an antibody on the second (or subsequent) encounter with the same antigen. Once an inhibitor is present, the strength with which the body reacts to further exposure of factor concentrate, also called immune response or immunologic response, can further classify the inhibitor type.

Low Responder: When people with low-responding inhibitors receive FIX, the inhibitor titer does not rise. Because the titer stays low, they may be able to control bleeding by using larger quantities of FIX concentrates.

High Responder: When people with high-responding inhibitors are exposed to FIX, the immune system quickly triggers even more inhibitor development. In this case, a bypassing agent may be used to control bleeding.

In addition, it is far more common with hemophilia B for the patient to have an allergic reaction (possibly even an anaphylactic reaction). In this case, a bypassing treatment that does not contain FIX might be used.