Moms need a safe place to land sometimes.
With that in mind, HFA is launching a blog dedicated to all things mom!Â In this safe spot, moms of a child with a bleeding disorder will be able to read stories and draw inspiration from like-minded (and similarly crazed) moms like themselves.
In recent years, moms of a child with a bleeding disorder have begun turning to online sources of friendship and camaraderie.Â  Moms are looking for a quick place to share and see reflections of themselves – and online friendships have blossomed!Â  HFA hopes that this blog will be an honest look into the lives of moms and families with bleeding disorders.Â  By sharing these insights, we can educate one another within our own bleeding community and teach our friends and family outside of the bleeding world that it’s not all bruises and bleeds.
In the coming months, we’ll be adding more moms to this blog and look forward to having a conversation each week!

Thomas was diagnosed with severe hemophilia A about 18 hours after birth. He was circumcised right after he was born and that area continued bleeding for some time. I initially wasn’t too concerned; I rationalized that the poor kid had basically just had surgery, so of course there was going to be bleeding. Looking back, I realize that the nursery nurses were changing all his diapers, so I never really knew how much he was bleeding. Our pediatrician, Dr. B., suggested running a few tests, “just to make sure everything’s ok,” so I agreed. 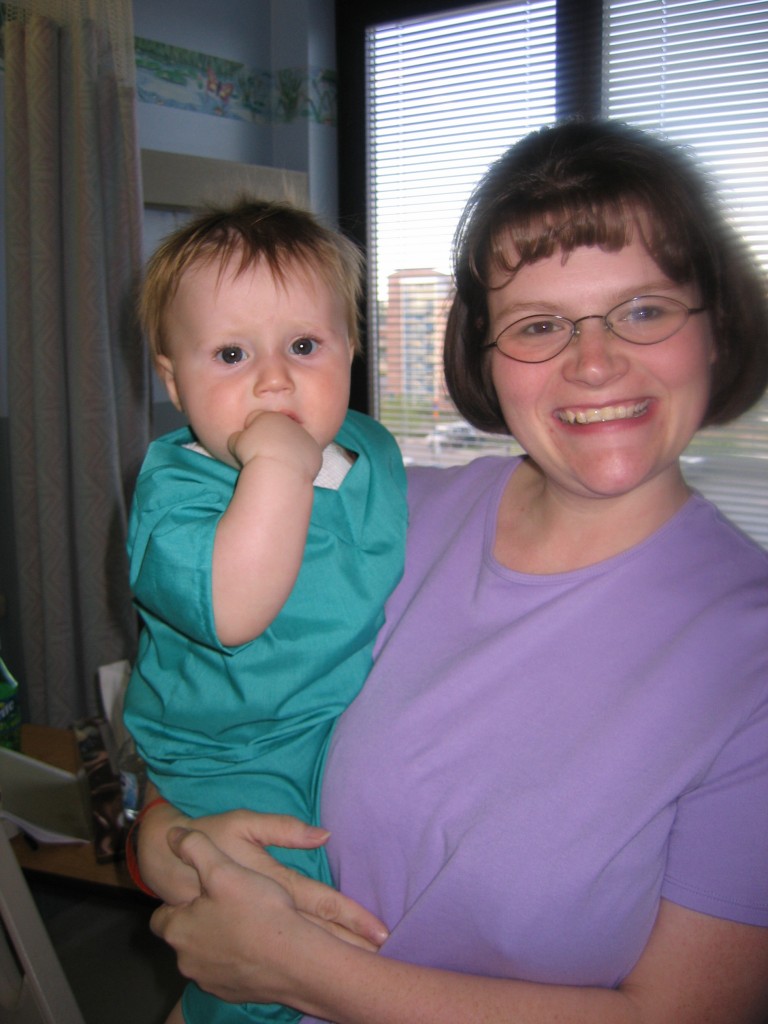 I was sitting in the hospital bed, cuddling with my newborn after just introducing him to his 20 month old older sister when the phone rang. I answered and Dr. B was on the line.Â  He asked if my husband Nathan was there with me and I said yes. He said, “Put the phone in between you. I need to talk to both of you.” That should have worried me, but it didn’t.
Dr. B started, “Guys, I hate to give you bad news.” He choked up. “Sorry. I always cry when I have to give families bad news. I’m so sorry I can’t do this in person.”
I’m pretty sure my heart stopped.
“The blood work we ran shows that Thomas has severe hemophilia.Â  I’ll be honest, I don’t know a lot about hemophilia, but there is another doctor, a leading hematologist, waiting on the line to talk to you. She’s going to explain everything. I don’t know about hemophilia but I’m going to learn and we will do this together.”
I think Nathan and I mumbled a few questions and then the doctor who would become our HTC doctor and friend got on the line. She told us she was in the car on the way to meet us and was bringing medicine that would stop the bleeding.Â  A nurse came in and whisked Thomas off to the Neonatal Intensive Care Unit (NICU). The doctor arrived shortly after that, bringing scores of educational material and giving us a brief explanation of what hemophilia would mean for us.Â  We all went to the NICU, and our doctor showed the staff, who had never seen hemophilia before, how to infuse and she explained hemophilia to them. Our doctor ended up spending about four hours with us that evening, answering questions, reassuring us that Thomas would have a normal life span and meaningful life.Â  It was as good of an experience you can have finding out that your child has a life altering chronic disorder.
Like most other hemophilia moms, I quickly found out that many medical professionals were like the NICU staff and my pediatrician: they have never seen, or had very limited or wrong knowledge of bleeding disorders. There’s nothing more infuriating than feeling helpless and seeking help for your child only to find that a doctor or nurse isn’t equipped to help you. 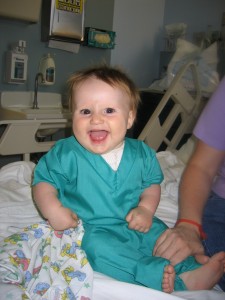 I decided I had to know as much as possible.Â  It was my responsibility to learn as much as my HTC team knew about hemophilia – while they may be the scholarly professionals with medical degrees, I had to earn my own degree to be an expert about my child.Â Â  I devoured every opportunity I had to learn more about my child’s disorder.Â  I read books, asked questions, and attended meetings. I jumped into volunteering in the hemophilia community and absorbed as much information as possible. It was a crash course in all things hemophilia.Â  It wasn’t long into Thomas’s infancy when we found ourselves in the emergency room one evening. As I started explaining hemophilia and chanting the “infusion first, x-rays later” mantra, the nurse asked me, “Wow. You know a lot about this. Are you a nurse?” “No,” I replied. “I have my M.M.D.Â  It’s a Mommy Medical Degree.”
All bleeding disorders moms are on that path to a M.M.D from the moment they have a child with a bleeding disorder.Â  What things have you learned along the way? How are you an expert about your child?
Sonji Wilkes was born and raised in North Carolina, where during high school, she developed an appreciation for volunteerism and community service. Â She graduated Magna Cum Laude with a BA in Behavioral Science from the Metropolitan State College of Denver in 2001. Â Sonji volunteers extensively in the bleeding disorders community and was selected as the 2006 National Hemophilia Foundation’s Volunteer of the Year. Â Sonji, her husband Nathan, and three children:Â Â Nora (11), Thomas (9), and Natalie (7), currently reside in Colorado.
_________________________________
*Note: “Infusing Love: A Mom’s View,” is a blog collection of personal opinions and a representation of individuals experiences. While extensive efforts are made to ensure accuracy of the content, the blog entries do not represent HFA or its Board of Directors. The blog is also not intended to be construed as medical advice or the official opinion/position of HFA, its staff, or its Board of Directors. Readers are strongly encouraged to discuss their own medical treatment with their healthcare providers.