Fore the Love of the Game 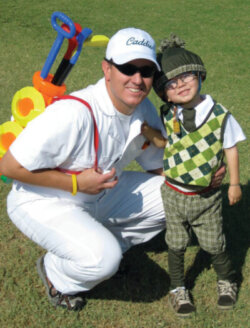 Hogan Lust, age 16, of Tucson, Arizona, has been playing golf since he was a toddler. His parents, Daniel and Corby, are golfers too, so it was only natural their oldest child would play the sport.Â
“He had a golf club in his hand since he could walk,” Daniel said. However, Hogan had to learn golf a bit differently, as he can only use one arm to swing. After his birth, Hogan had a brain bleed, but with no family history of hemophilia, it was unexpected and went undiagnosed until he began to have seizures during his first week of life.
Hogan was diagnosed with severe hemophilia A. A neurosurgeon had to evacuate the bleed, which included removing his right frontal lobe and part of his parietal lobe to relieve the pressure on his brain.Â
The surgery left the baby with cerebral palsy, causing weakness on his left side, particularly his left arm. Throughout Hogan’s childhood, the Lusts encouraged him to try certain sports and activities, adjusting them as he needed. In fact, in November 2021, Hogan rode the 27-mile El Tour de Tucson bike race with an adaptive recumbent bike.Â
But it is golf that became his passion. When he was younger, he competed in the PGA Junior League as a member of his local country club’s team before aging out of the program. Several years ago, the Lusts heard about the North American One-Armed Golfer Association, but there was no youth program. But by January 2019, the association had started a youth program and Hogan played, for the first time, with other teenagers who played with one arm because of a physical disability or limb deficiency.Â
“It was different. I was playing with kids my age, but I had never competed before with people playing with one arm like I play with,” Hogan said. “I was playing with people who play like me.”Â
In June 2021, Hogan competed against adults at a one-armed golfer regional event in Kentucky-and he excelled. “I feel grown up that I can compete with the adults,” he said. Next, he headed to the national event in Michigan in September, where he wanted to compete with the adults again.
At nationals, Hogan became the youngest one-armed player ever to medal in stroke play. After 36 holes on two courses, he qualified as #8 in his flight, the youngest to ever do so, qualifying him to play in the match play championship. (A golf flight is a small group in a tournament that plays directly against each other.) 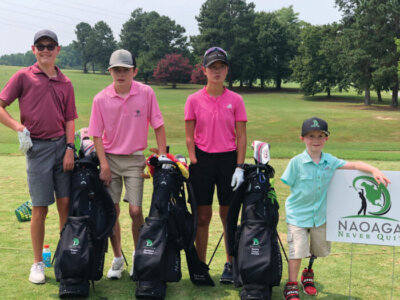 Hogan went on to play in the 18-hole championship. But weather was a challenge for the Arizona family. Daniel chuckled as he explained they didn’t have heavy jackets or rain gear, not even an umbrella, for that third cold, rainy day of golf.
Although Hogan didn’t medal, a highlight was that Daniel was his caddie for part of the tournament. “I was very proud that he was competing,” Daniel said. “I caddied for him a little bit, so we could talk strategy and club selection and types of shots and where to land the ball. But it was up to him to go up and hit the ball and play his game.”Â
Hogan has also competed twice in CSL Behring’s Gettin’ in the Game sports event for kids with bleeding disorders. His first year he won longest golf drive, and his second year, he won second place overall for golf.Â
Hogan practices at his local country club, where he uses the golf handicap scoring system to compete with his dad-they play for 25Â¢ a hole, and Hogan has beat his dad twice.Â
Through the one-armed golfer association, Hogan has been able to take clinics from top one-armed adult players, who have taught him new techniques. “Since Michigan, we’ve cut his clubs down. He’s learned some different types of swings and practiced his short game,” Daniel said.Â
“I like golf because it’s something I can do, and the fact that I’m competing with other people with my disability and being able to be a part of the association-it’s pretty special,” Hogan said. “I just want to keep playing and play in as many events as I can and eventually become a national champion.”