By Emily Boyer
I remember the days that followed Logan’s diagnosis in snapshots. I remember some things very vividly and other things I wouldn’t remember if I was shown a videotape. It all came together on one big twisted rollercoaster. One thing I do remember is the hematology team assuring us, almost confidently, that Logan’s hemophilia was due to a random mutation and not from genetics. There is no hemophilia to speak of in my family and an in-depth search into the record books came up with the same conclusion – nothing. 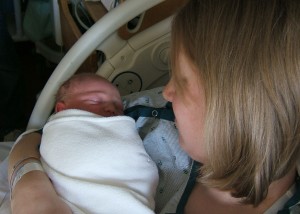 A clear memory though, is nine months after Logan was born in January, when my phone rang and “Children’s” popped up on the screen. I was in the car with a co-worker getting coffee.
I answered the phone, “Hello.”
“Is this Emily?” asked the genetic counselor.
“Yes,” I said cautiously.
All I heard after that was “I have your test results. Do you have a moment?”
I quickly responded, “No, I am busy. I am sorry.”
She stammered over her words, not expecting to get a “no” from me, saying something about calling her when I had a few moments to go over the test results about my carrier status.
There it was. That was the diagnosis I never expected to get. No family history; it had to be a random mutation. It had to be.
Later that day a room full of people: hematology nurse, nurse practitioner, social worker, a doctor and a resident medical student, made it official. I carry the hemophilia gene.
Prior to that day in January when people would ask, “How did Logan get hemophilia?” I could say with confidence that it was a random mutation. I could not say that any more. My default was to avoid the topic. Often times, people do not know what hemophilia is, let alone how you get it. So most people would not ask.Â  But then there were the people that followed up the initial questions with “How did he get it? Is it genetic? What are your chances of having another one with hemophilia?”
It is genetic, I would explain. Women, like me, carry the gene.Â  Â Genetically speaking, if I were to have another baby boy, he would have a 50/50 chance of having severe hemophilia.Â  This whole speech was quite rehearsed and without emotion.
I have experienced a handful of weird, funny and inappropriate comments about Logan’s hemophilia, but nothing would have prepared me for the comments that sometimes flow out of people’s mouth about my carrier status.
“I guess you are off the hook for having more kids.”
“No more kids for you!”
“At least you know now instead of after you have another with hemophilia. That would really suck for you.”
“Are you getting your tubes tied or is your husband getting things snipped?”
“At least you could adopt. ” (The thought of adoption is a wonderful idea, but not in the way they were trying to use.)
“Are you going to have more kids?”
“With medical advancements, I wonder if you can wait, like ten years, and they could cure the hemophilia while you are pregnant.”
The comments ranged from curious and trying to be helpful, to hurtful and completely invasive. I felt like people’s knowledge of my carrier status gave them an open door into my family’s reproductive decisions. Their comments made me think that, had I been aware of my carrier status, these individuals would have advised me to never have children.
Yet, what most of these people did not know was that my carrier status and Logan’s hemophilia had me fraught with guilt – guilt over the multiple surgeries, daily infusions, hours spent in doctors’ offices and the dreaded inhibitor. I tried to remember that I had no control over the genetic testing outcome, but this guilt was often relived when I had to explain to one more curious person that Logan’s hemophilia was the result of my genes over its outcome. Those comments and questions often time illuminated the deeply held shame and guilt that I still experience.
We live in a world where things don’t go accordingly to plan. Hemophilia wasn’t a part of my plan, it wasn’t a part of my family’s plan, and my carrier status certainly wasn’t on anyone’s plan, but it also allowed me a new level of appreciation that I am not controlled by the opinion or thoughts of others. Being a carrier was an incredibly painful realization but I don’t want to be defined by it. I want to take the precious life I have and live it in spite of my status.
Regardless of my carrier status, if Logan is my only blessing or I am blessed with more, I can say with confidence, genetics aside, that my life and my child(ren)’s lives does not rest in the opinions of other people or the new medical information stored in my file.Â  Sometimes it is so easy to get wrapped up in the genetics and the exhausting hours spent on factor that I forget to remember how grateful I am that Logan is a part of my life and that hemophilia is just one part of his life.Â  While I would like to spare him some of the challenges he will face living with a bleeding disorder, it’s hard to say that there’s anything about him I would change.Â  To me, he is perfect just the way he is.
Emily Boyer lives with her husband, Geoff, and 2 year old son, Logan, in Minnesota.