Snakes can be poisonous. I have tried desperately to avoid them since I was about eight years old and was innocently climbing a tree and one slithered up next to me. Â I don’t always succeed.
Guilt is also poisonous. Â I have tried desperately to avoid it since Thomas was born. I don’t always succeed.
This is the story of when my avoidance of mommy guilt and snakes collided.
The last two years have been rough; Thomas has had an increase in difficult-to-treat bleeds, infections, surgery, and multiple hospitalizations over birthdays and holidays. He has missed many highly anticipated events and, for a child who absolutely adores swim team, has sat on the sidelines far too much this past year. It’s been hard and, honestly, I think Thomas has handled the disappointment better than I have.
I took his sisters to a swim meet this summer and Thomas stayed home with my husband. Â Thomas had swam brilliantly the week before, but at a hefty price. Before the meet had even concluded, a quad bleed had started. The boy who loved to swim had only been able to participate in two meets of a six-meet season. Â He had stoically carried on in the week following, infusing multiple times daily; but never complaining.
On the other hand, I had been a complete beast to live with at home. I was cranky and irritable. At swim practice, other parents asked how Thomas was doing and I put on the brave face, “Well, he’s able to get around on the crutches now, but his swim season is over. It’s a pretty bad bleed.” The other parents would remark how incredibly well Thomas, and even the whole family, handles everything we go through. Â I’d grit my teeth and say thank you. Even as the words came out of my mouth, I knew I wasn’t saying what I really wanted to. I wanted to cry and scream and whine, “It’s just not fair and stop giving me any credit!”Â 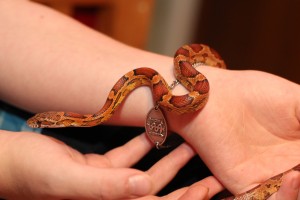 The swim meet had been particularly tough for me. I’m used to keeping up with events for three swimmers and on this day, I only had the girls’ events to watch. Â I was bored and I felt guilty because that wasn’t fair to my girls. I was angry at myself for letting Thomas push himself too hard the previous week; it was my fault he was missing out. I was guilty when other parents were cheering on their kids and all I could think was, “Thomas is a better swimmer than your kid, but he doesn’t get a chance to prove it.” Â I was guilty, bitter, and angry.
About halfway through the swim meet, Nathan texted me from home. He and Thomas were ecstatic – they had captured a small garter snake in our basement. Â The boys thought it would be a great idea to rehabilitate it. Â This did not improve my sour mood. Â ‘A snake in my basement? Great. Â Didn’t we have enough rehabilitating going on already?’ I thought.Â I texted back to Nathan, Â using some colorful language, that the snake was not welcome to reside in our home.
The girls and I arrived home a few hours later to find that Thomas had skillfully and miraculously cleaned his room. In record time. Â He had also named the snake, “Rick.” Â “Wonderful,” I sarcastically thought. Thomas had gone out of his way, while still recovering from a bleed, to clean his room and he named the reptile. He was attached. Â He wanted this thing bad. I lit into Nathan, “How dare you let him believe I would allow this? Â And now I have to be the bad guy and say no, yet again, to the child who is always being told no, that he can’t do this or have that. Thanks a lot.” I retreated to my bedroom to pout. Â I could hear the girls bonding with Thomas and Rick. “Traitors!” I fumed. Â Nathan broke the news to the kids that I was not going to share the house with a reptile. One by one, the kids shuffled into the bedroom, tear-stained, to say good night and that they planned to release Rick back into the wild the next morning.
I slept unsettled that night. I wish I could lay blame on the baby snake and being worried that it had somehow escaped during the night. That wasn’t the case. Â I woke up the next morning, hearing the kids laughing and talking to Rick (who they were now debating might be a girl). Â Even as I lay there thinking, “Please don’t let that thing be pregnant,” I knew I had to let Thomas keep the snake. Â The kid has had so many setbacks and the only thing preventing him from having some happiness was me. Â Mommy guilt won. Â The snake won. But, most of all, Thomas won. It might not have been the swim race I wanted him to win, but he won all the same, and a win is a win.
(Update: Rick passed away a few weeks later.Â  Thomas was devastated.Â  Nathan pointed out Thomas’s upcoming birthday and that maybe a new snake would make a good gift.Â  Sure enough, Thomas bled on his birthday and in the week following developed two other bleeds.Â  Mommy guilt won again…meet Bart, our new juvenile corn snake).
Sonji Wilkes lives with her husband, Nathan, and three children Nora (11), Thomas, (10), & Natalie (7) in Colorado.