The first day of school is supposed to be hot, sunny and bright. Thomas’s first day of school – actually his second first day of school – was on February 4, 2014 and only had a high of fifteen degrees Fahrenheit.Â  It was not your typical first day of school in many ways. It was a snowy, windy and cold day, but it couldn’t have been a more glorious day.Â  It was a second chance to the school year for Thomas and for us as a family.
We took the usual back-to-school pictures in August.Â  Thomas was on crutches, but I honestly can’t remember what joint or muscle was bleeding.Â  It didn’t get any better from there – the first and second trimester of this school year has pretty much been one bleed after another. As a matter of fact, until two weeks ago, Thomas had only been in school fifteen days since the official first day of school back in August.Â  He was hospitalized four times with bleeds, and had multiple MRIs.Â  I’m certain my mini-van could navigate its way over to the HTC without me behind the wheel.Â  The school district finally caught on near the end of the first trimester that this hemophilia thing was pretty serious and began sending a teacher to our home so that Thomas could try to keep up with his schoolwork.Â  Even then, there were some mornings that I had to call the teacher and tell her that it wasn’t a good day and that Thomas was unable to work with her.Â 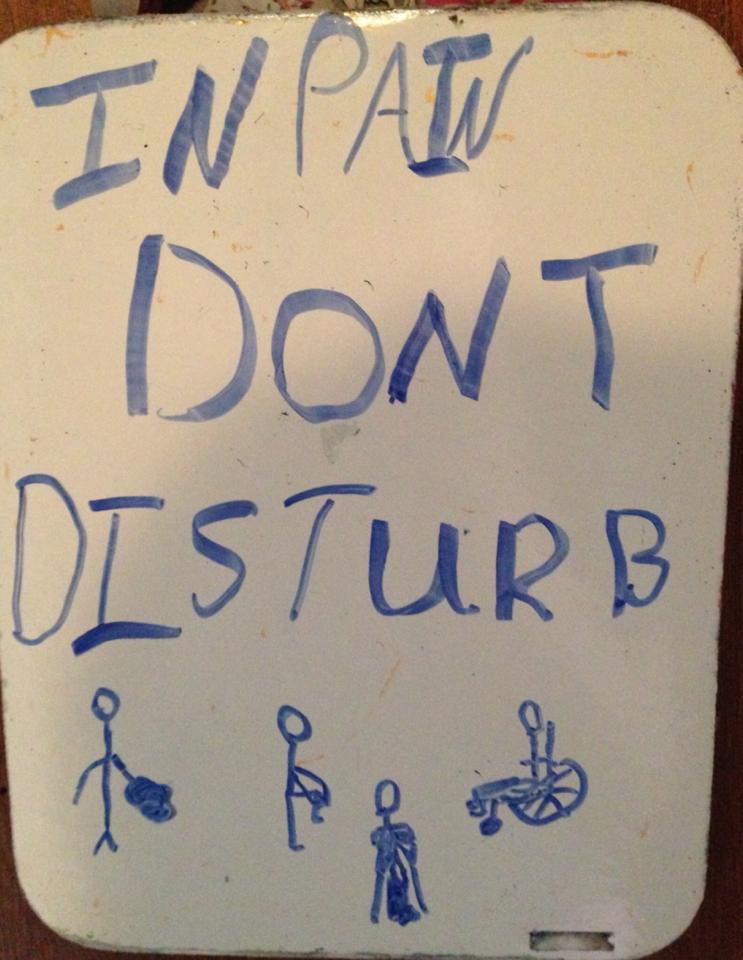 In early November he had a particularly nasty shoulder bleed that required some major narcotic pain medications. Despite my best efforts to advocate and educate myself about the ramifications of using this particular drug, Thomas became dependent on the medication. My sweet mischievous ten-year-old turned into a sullen, depressed and withdrawn shell of himself.Â  He couldn’t get out of bed on Thanksgiving, and Christmas was spent in and out of bed.Â  His pain was off the charts even though he would spend up to sixteen hours a day sleeping due to the effects of the narcotics.Â  He would go days without coming downstairs – forget even leaving the house.Â  When he was awake, he often had a vacant look about him and he’d forget what he was talking about not just mid-sentence, but mid-word.
Last month, after a lengthy clinic visit with our hospital’s pain management team, Thomas had to live through several days of the sheer hell that is narcotic withdrawal.Â  We’ve had a lot of sleepless, awful nights in our hemophilia journey, but that first night of narcotic withdrawal was absolutely the worst night I’ve ever had as a mother.Â  I was helpless in what I could do to help him through it and was consumed with guilt because I was the one who had given permission to use the pain medications in the first place.Â  After a few good cries between the two of us, he soldiered through it with bravery and determination, and as usual, handled it much better than I did. I was awash in an overwhelming depression and anguish, with a “this isn’t normal, no ten-year-old should have to endure this,” on an endless loop playing in my mind.
For all the adversity this child has faced, he hasn’t gotten caught up in that negative thinking.Â  He sets a goal and gets up each day and tries.Â  He attempts to do better than the day before.Â  He embraces second chances with gusto. Glimpses of Thomas have been coming back every day since the withdrawal and his giggles have never sounded sweeter.Â  So on that chilly Tuesday morning when he came into my bedroom and said, “Mommy, I want to try to go to school today,” who was I to squelch that try?Â  Fortunately, in that one moment my mindset changed. Through his simple request to return to school, I realized that Thomas is no ordinary, normal kid.Â  He’s extraordinary.Â  He’s spectacular.
And so, he had his second first day of school this year.Â  He’s been able to attend every day since then – the longest stretch all year.Â  He tries.Â  He attempts. Again and again, he gets up and tries again.
Life with a bleeding disorder can be long, cold and brutal – much like this winter has been.Â  But the lessons learned for our family this school year haven’t come from any textbook or from the weather – the lesson has come from a resiliency within a child who has sparkled like freshly fallen snow when faced with darkness.Â  Thomas has taught me more than he’d have ever learned in the classroom — he’s taught me to realize who needs normal when you have such perseverance and extraordinariness right before you?Â  He’s taught me to never give up and to try…and try again.Â  He’s taught me to believe in the power of second chances.
_________________________
Sonji lives with her husband, Nathan, and three children Nora (12), Thomas, (10), & Natalie (8) in Colorado.
*Note: “Infusing Love: A Mom’s View,” is a blog collection of personal opinions and a representation of individuals experiences. While extensive efforts are made to ensure accuracy of the content, the blog entries do not represent HFA or its Board of Directors. The blog is also not intended to be construed as medical advice or the official opinion/position of HFA, its staff, or its Board of Directors. Readers are strongly encouraged to discuss their own medical treatment with their healthcare providers.