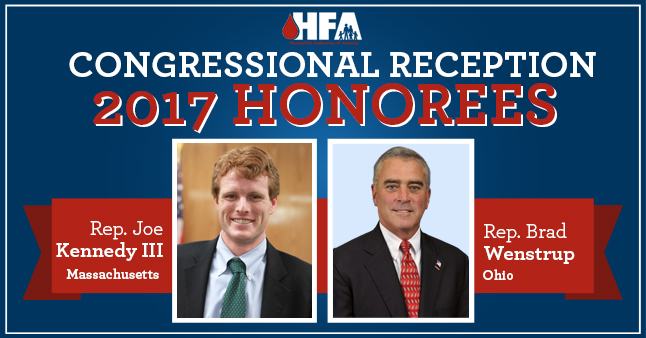 On May 24, 2017, we hosted our 4th Annual Patient Fly-In in Washington, DCÂ alongside an onlineÂ Virtual Hill Day. As they consider HR 1628, the American Health Care Act (AHCA), the Senate has indicated that they intend to start from scratch on health reform and they need to hear from their constituents when crafting their plan. With that in mind, patient representatives asked Senators to protect affordable coverage for people with pre-existing conditions, ensure that insurance plans provide meaningful coverage and an appropriate scope of health benefits; protect people against potentially catastrophic costs of chronic illness; maintain robust safety net coverage for those who cannot afford private insurance; keep coverage for children up to 26 years old; and oppose underfunded high risk pools.
HFA also asked members of the House to support HR 2077, the “Restoring the Patient’s Voice Act of 2017.” This bill protects patients on employer or self-funded insurance plans from potentially harmful step therapy protocols. Step therapy is a cost cutting strategy employed by insurance companies that requires patients to take a medication, usually a less expensive product, first and “fail” on that product before covering another, potentially more expensive therapy.
As part of our Patient Fly-In and Virtual Hill Day, we had:

We also hosted a Congressional Reception to honor members of Congress that have done extraordinary work for those with chronic and expensive disease. Each of our honorees received our Champion Award. Whether it be for their work with the ensuring accessible healthcare coverage or working to reduce barriers to care, we are pleased to honor these lawmakers.
______________________________________________________________________________
Congressman Joe Kennedy III
Joe Kennedy III represents the Fourth District of Massachusetts in Congress, where he serves on the House Energy & Commerce Committee. Congressman Kennedy has advocated for families and communities on a wide range of issues including mental health and addiction, Medicaid, education, economic development, and consumer protection. He has championed bipartisan legislation to expand educational opportunities for middle and working-class students and support domestic manufacturing. Prior to his election to Congress, Joe Kennedy worked as an Assistant District Attorney in Massachusetts and as a member of the Peace Corps in the Dominican Republic.
HFA is honoring Congressman Kennedy for his activism and his eloquence in defending the principle that all Americans have a right to access quality healthcare. US News and World Report has noted that “Congressman Kennedy is carrying his family legacy into a new era,” speaking up for the neediest among us. Millions have seen Congressman Kennedy’s passionate speeches challenging Congress not to turn its back on those who need health coverage most, and we honor Congressman Kennedy for championing the patient voice in the health care debate.
Representative Brad Wenstrup (OH)
Dr. Brad Wenstrup was elected to the House of Representatives in 2012 to represent Ohio’s Second Congressional District.Â Congressman Wenstrup serves on the House committees on Intelligence, theÂ Armed Services, and Veterans’ Affairs. He has focused his work on strengthening our military and national defense, helping our returning service members transition to civilian life, and supporting the veteran community. Prior to his election, Dr. Wenstrup worked in private practice as a surgeon and served in the US military. His service included a tour of duty in Iraq as a combat surgeon, where he was awarded a Bronze Star and Combat Action Badge. Congressman Wenstrup continues to serve as a Colonel in the US Army Reserve, treating patients at Walter Reed.
Last month, Congressman Wenstrup (with his colleague Congressman Ruiz) introduced H.R. 2077, the “Restoring the Patient’s Voice Act of 2017.” This bill protects patients on employer or self-funded insurance plans from potentially harmful step therapy protocols. Step therapy is a cost cutting strategy employed by insurance companies that requires patients to take one medication first and “fail” before covering another, potentially more expensive therapy.
Clotting factor, the medication essential to the treatment and management of hemophilia and other bleeding disorders, is a biological product that varies widely: these products are not therapeutically equivalent or interchangeable and no generic version exists. Prescribing clotting factor is a complex exercise that must be left to specialists in close consultation with their patients. Allowing immediate access to the most appropriate product will result in better treatment outcomes (less long-term joint damage, less pain, reduced absences from school and/or work) and lower treatment costs.
As a doctor himself, Congressman Wenstrup recognizes that step therapy protocols can too often serve as a roadblock to getting patients the care they need. H.R. 2077 has been endorsed by a range of patient and medical advocacy groups. HFA today honors Congressman Wenstrup for his leadership in protecting the doctor-patient relationship and patient access to appropriate and individualized treatment.