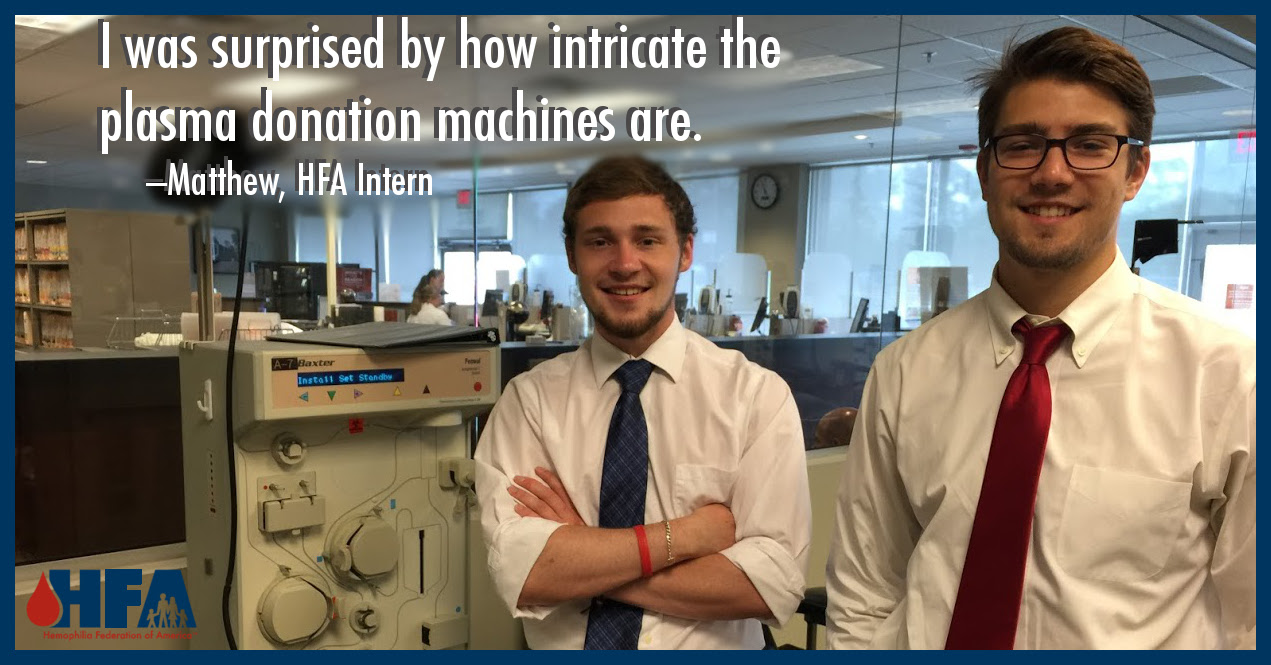 Earlier this summer,Â we introduced you to Adam and Matthew, our summer Policy Interns. These two have been busy all over DC, attending Congressional hearings, Executive briefings, and much more. Last week, Matthew and Adam had the opportunity to tour Grifol’s plasma collection center in Frederick, MD. Centers like this collected plasma from donors, returning the red blood cells to the donor. This plasma, which undergoes several levels of strict testing, is then pooled and parted out to create many different therapy products, plasma-based bleeding disorders therapies being among them.

Keep reading to see what Adam and Matthew thought about this facility, and how it’s impacted their view on the bleeding disorders community!

Adam:Â This was my first time, and I expected a lot of machines, computers, and maybe a lab; I assumed it would be a fairly high tech place. I was also excited to see the facilities, given that my factor comes from plasma centers like the one we visited. I have a great appreciation for those I saw donating.

Matthew:Â This was my first time visiting a plasma center. I have driven by other centers but never been inside. I’m not sure exactly what I was expecting, but based on stories I’ve heard and my experiences with temporary donation sites the bar was not set too high.

Adam:Â When we arrived, I found that the lab was very spacious and had a large reception area. There were around fifty beds and machines used to draw plasma from the donors. My favorite part had to be the lab, where collected plasma is stored in Â a massive walk-in freezer. This was especially exciting for me, being from Minnesota. -36Â °C (-32.8Â °F) was a welcome break from the DC heat.

Matthew:Â I was impressed with how clean and well kept up the center was. The center was divided into separate areas based on intake, physical examination, donation machines, and the lab. Everything was in order and things seemed to be running efficiently. Although there were only about 6 people in the process of donating when we walked through, our tour guide mentioned that it is usually 2-3 times busier.

Adam:Â What surprised me the most was the personal knowledge the medical staff had of the donors. I didn’t realize that many donors come in quite often, and so the staff gain some familiarity with them.

Matthew:Â I was surprised by how intricate the plasma donation machines are. There are about 6 different parts to the donation process (like tubing, bags, etc.), and it usually runs for about 9-12 cycles of harvesting plasma and returning blood per donor. None of the machine parts are reused after the patient is finished donating.

Adam:Â One of the most interesting things I learned during the tour was that the plasma is separated from the blood in small centrifuges on the machines as it’s being collected. I also didn’t know that it needed to be kept so cold during storage to prevent the degradation of the proteins. Additionally, I thought it was interesting that all of the plasma products are so meticulously tracked that issues or contamination can be tracked to the exact person or product used in the collection of the plasma. This was particularly reassuring as a patient using the product.

Matthew:Â I didn’t realize that theÂ plasma isn’t put to use until many months after it was originally donated.Â It was also interesting to find out that donors must donate twice before their plasma is considered usable and that donors can only donate twice a week, with safeguards in place to prevent them for overdonating across multiple collection facilities.

Matthew:Â It was great to finally see what we have been learning so much about in-person. The staff was extremely friendly and informative.

Adam:Â Picard and Kirk tie. I grew up with Kirk but Picard is the better captain.