How Our Interns Saw The HFA Hill Day 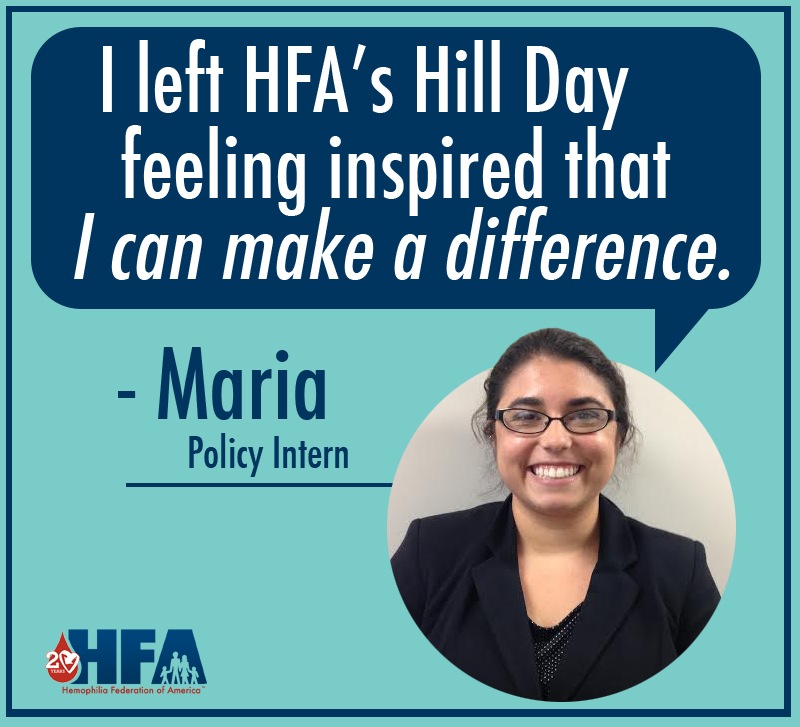 Last week, Â members of the bleeding disorder community flew to Washington, DC to speak with their US House and Senate representatives asking them to support HR 460, the Patients’ Access to Treatment Act. This important piece of legislation prohibits insurance companies from charging more for the drugs that they place into specialty tiers, than they charge for the drugs that they place into non-preferred brand tiers.
In total we had:

Our summer policy interns, Lewis and Maria played a vital role in the success of this day! Read about their experience about last week’s Hill Day!
Maria
Last week I had the privilege of joining a group of people from around the country as we advocated for hemophilia and other bleeding disorders on Capitol Hill. A member from our group talked to each representative’s aid and told them about how a bleeding disorders affects their life and the issues we were there for, like theÂ Patients’ Access to Treatment ActÂ (HR 460).
The group I was in had people from Alaska, Colorado, Tennessee and Washington State. This group of people made up a stellar team as they were all very different but came together for a common goal. As we were walking from office to office, I had the chance to learn more about them and the places they’re from. The couple from Alaska told me about their hometown and how during the summer they only have about 4 hours of dusk and 20 hours of daylight. It was great to be able to interact with people from all over the country who are affected by hemophilia and other bleeding disorders. One thing that I found interesting was that I had never met so many adults who had hemophilia. I have met numerous children with hemophilia, but only a handful of adults. It was fascinating to listen to stories of them growing up with hemophilia and hearing them tell stories about some of the bad habits they had during their adolescent years. With my brother just entering his teen years, I was able to relate. 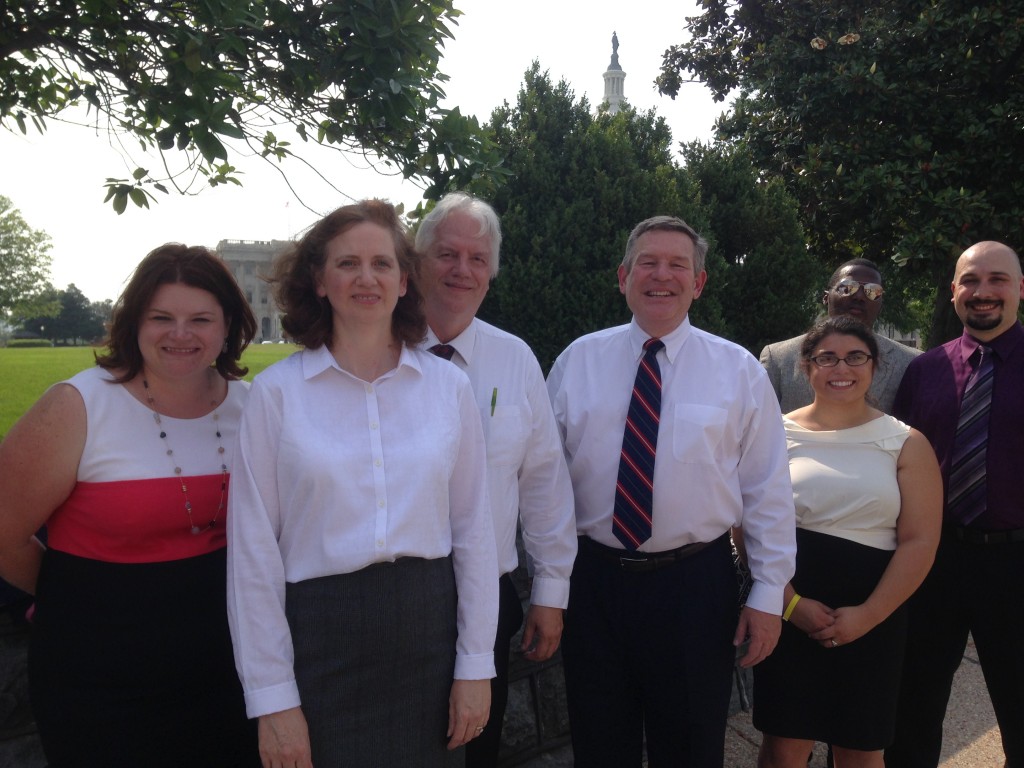 The agenda for this hill day included theÂ HR 460Â and problems surrounding third party premium and co-pay assistance. While talking with representative’s staff about theÂ HR 460, for the most part, many seemed receptive and interested. This bill would make insurance companies link their specialty tiers with their non-preferred brand tier to help control excessive cost-sharing. The response over all was positive with staff eager to pass on the information about the importance of such a bill.
During these meetings advocates also discussed the issue ofÂ third party payers.Â In just the past month two states have declined nonprofits as third party payers for insurance. It was important to share this problem with the representatives so that they could take the necessary actions to allow for better clarification on the issue. I greatly enjoyed being a part of the team as they went to different offices to advocate for Hemophilia. It was interesting to see the responses of the staff , receive feedback on our advocacy and learn steps that could help allow for faster change in the future. At the end of the day I felt encouraged through our efforts.
I would have to say that one of the highlights of this day was the Congressional Reception. During this reception we honored Senator WhitehouseÂ for his support for the hemophilia community, as well asÂ Congresswoman Capps, Congressman McKinkley and Congressman Johnson. There was a great turn out and I was able to meet even more people who were a part of the community. The reception gave me an opportunity to talk to legislators and their aids, pharmaceutical representatives, and patients. It was great to see the support thatÂ Senator WhitehouseÂ has for hemophilia, at the end of the day left feeling proud to be a part of this community
Lewis
Maria and I have jumped right into the fray over the past two weeks. Wednesday, June 18 was the Hemophilia Federation of America’s Hill Day. HFA brought in community members from 11 different states for meetings with key members of the house and senate.
Maria and I spent the days leading up to Hill Day putting together Advocacy Toolkit binders for our participating community members. We also put together some leave-behind folders with helpful information for the offices we met with. Putting these together helped us become more familiar with the three major issues we were discussing: support for the Patients Access to Treatment Act (HR 460), clarifying a CMS nonprofit assistance interim rule, and increased funding for the CDC. In the meetings, the state constituent shared their personal experience with living with a bleeding disorder, and was able to offer a perspective on how each of these issues would affect them. For instance, many don’t really know what the CDC does, and that their budget has been cut sharply in recent years, especially the National Center on Birth Defects and Developmental Disabilities (NCBDDD)Â which works with bleeding disorders. We shared stories of how Blood Brotherhood, a CDC supported program run by HFA, has had a huge impact on the lives of many adult men with bleeding disorders. Â 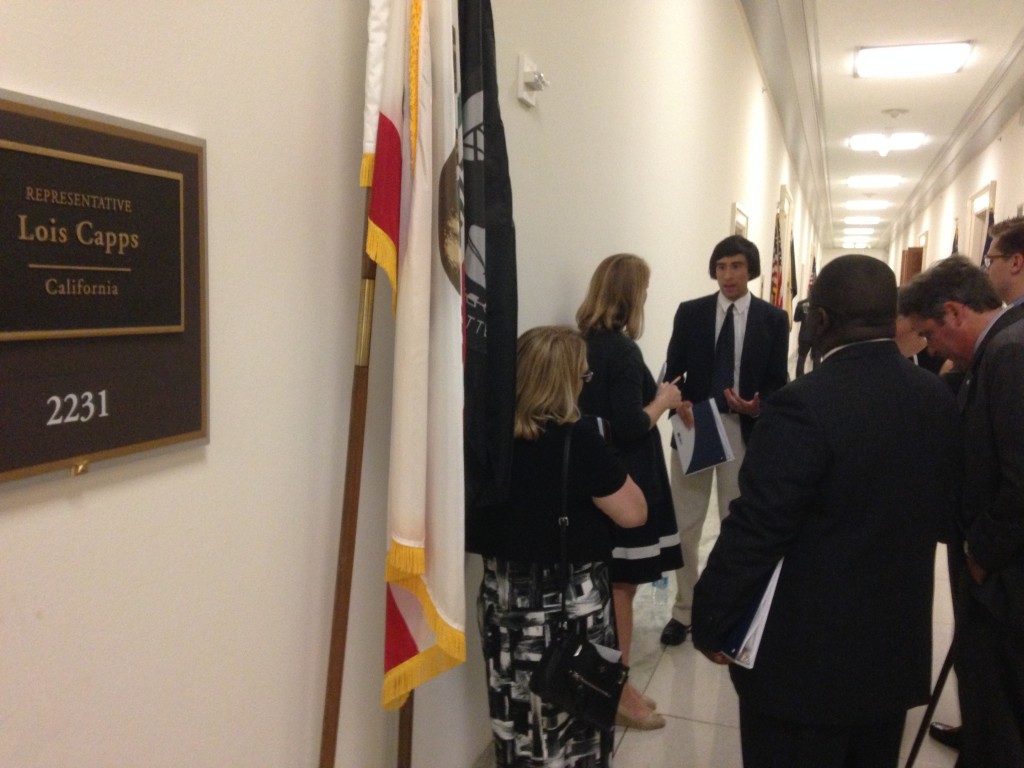 “Putting in the leg work” is a common expression on Capitol Hill, referring to the process of meeting with legislative offices to advocate for your issues. For a full day of Hill meetings, the term is very appropriate. Every time I turned a corner in one of the six congressional office buildings I found another quarter mile hallway lined with the various state flags. Offices are very accommodating upon arrival, with an intern offering coffee, water or even snacks from their local districts – who knew so many different candies are made in Illinois?
It felt great working alongside community members from so many different states. In a large and diverse country like America our community members have vastly different experiences. The group included parents of a hemophiliac child in Alaska and a man who grew up in Chicago. As I hope to continue as an advocacy leader for hemophilia it’s important that I become familiar with the challenges faced by community members across the nation.
To paraphrase Senator Whitehouse, Washington does not only answer to big business and profit motivated lobbies, they were elected to serve all of their constituents even when that requires solving complex issues such as healthcare reform. The congressmen and their staff depend on us to stay informed. With high staff turnover rates it is especially important to be consistently vigilant and maintain relationships with congressional offices. The future of American healthcare is being shaped now one way or another, and this could be a defining moment for everyone living with rare chronic conditions, which accounts for 30 million Americans. So join the conversation now to help ensure the future health of yourself and your family, HFA has many resources. Check them out!Â