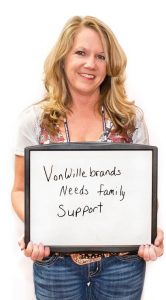 Approximately 1/3 of women carrying the hemophilia gene experience bleeding symptoms. Carriers with clotting factors levels of less than 60% of normal may have symptoms similar to a male with mild hemophilia. They are often called symptomatic carriers or are diagnosed with mild hemophilia.

The more common bleeding disorder in women is von Willebrand Disease (vWD), which occurs in about 1% of the US population. Heavy bleeding is one of the most common problems women report to their doctors. It affects more than 10 million American women each year. This means that about one out of every five women has heavy menstrual bleeding. A CDC study found that bleeding disorders were diagnosed in nearly 11% of women with heavy menstrual bleeding. (CDC)

In addition to vWD, other rare bleeding disorders and more common platelet function disorders may also be responsible for bleeding symptoms in women.

For additional information about women & von Willebrand Disease and to learn about the experiences of women who have it, view this video from the CDC’s National Center on Birth Defects and Disorders:

Although there are no cures for bleeding disorders, treatment is available to control symptoms and help women avoid complications and invasive procedures.