I grew up an only child raised by my grandparents, so I never had the sibling experience of arguing and fighting with another child in the house.Â  As a mom, that battle between siblings and the idea of sibling rivalry has been a foreign concept to me.Â  Sure, there were periods of my life when I loved being “an only” – who wouldn’t love the direct attention and not having to share your toys?Â  But as I got older, and my mother’s medical care fell solely on my shoulders, I would have loved to have had a brother or a sister to lean on.
I wrestled a lot with missing out on the sibling experience when my two older kids, Nora and Thomas, were in their toddler stage.Â  I had just lost my mom and was still trying to figure out this motherhood thing, along with coming to grips with having a child diagnosed with a chronic illness.Â  Throw in two sweet, but active children born only 20 months apart and some days it felt like sibling rivalry was more than I could handle.
As a child of the 80’s, I grew up reading Shel Silverstein and, in fact, he remains my favorite poet to this day.Â  Little did I know when I began reading his poems that Mr. Silverstein would influence my parenting style. .Â  After one particularly hard morning of spilled milk, dirty diapers, a Cheerio explosion in my kitchen and two rambunctious toddlers arguing and hitting one another, I pulled “Where the Sidewalk Ends” off a shelf and tried to engage the kids in something a little more quiet and controlled.
As I read silly poems aloud and showed off cute drawings to Nora and Thomas, the atmosphere began to change.Â  We giggled together and the mood lightened.Â  And then, as if Mr. Silverstein knew I needed a good offensive weapon in the sibling rivalry war that was being waged in our house, this poem appeared: 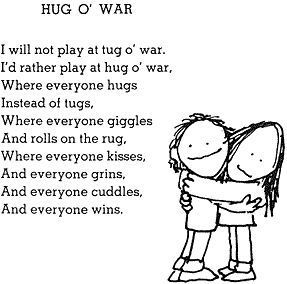 Nora and Thomas were immediately drawn in. “Hug O’ War,” they squealed with delight.Â Â  And so they began – they hugged and giggled and wrestled (typically every hemophilia mother’s nightmare – but not in this case.Â  They were happy and not fighting! “Success” is what I was silently crying in my head!)Â  Over the next several weeks, I would catch them rolling around on the living room floor, embracing in “Hug O’ War.”
When an inevitable fight over a toy or my undivided attention would break out, I’d declare “Hug O’ War,” and they’d have to drop their angry attitude and hug one another.Â  Surely, it’s a scientific fact that you can’t hug someone and be angry, because whatever issue had caused the irritation would be wiped away when Nora and Thomas would hug.
Somewhere over the years, “Hug O’ War” stopped in our house.Â  I’m not sure why.Â  The sibling issues certainly haven’t stopped.Â  Rightfully so, Nora sometimes feels anger and frustration that Thomas’s medical needs often trump everything else.Â  Thomas feels anger and frustration that Nora, and younger sister, Natalie, have their own special sisters’ relationship and that they don’t have to take time to infuse or miss school or miss an outing due to a bleed.
They may not be toddlers anymore, but I wonder if “Hug O’ War” could work in my now tween-aged children – would it still elicit fits of laughter and help to ease some of the tension that happens between siblings? Will it help me survive the ensuing adolescent years when they come at me with attitude and sass?
I might just start a war tonight when they get home from school – a “Hug O’War.”
_________________________
Sonji lives with her husband, Nathan, and three children Nora (12), Thomas, (10), & Natalie (8) in Colorado.
*Note: “Infusing Love: A Mom’s View,” is a blog collection of personal opinions and a representation of individuals experiences. While extensive efforts are made to ensure accuracy of the content, the blog entries do not represent HFA or its Board of Directors. The blog is also not intended to be construed as medical advice or the official opinion/position of HFA, its staff, or its Board of Directors. Readers are strongly encouraged to discuss their own medical treatment with their healthcare providers.