Benny starts high school this week. How did that happen? When I started working at HFA he was in kindergarten. I remember being amazed at his astounding ability to put 100 piece puzzles together at 5 years old and spend hours building things with Legos. At the start of second grade, despite untold hours trying, we wondered if he’d ever learn to read, which of course he did, on his own time. In 6th grade he had to cross a busy street to get to the new school, and I’ll admit it, I followed him that first day, hiding and peeking through the bushes to watch how well he listened to the crossing guard.
Now it is time for high school. I did the usual and reached out to schedule time with his teachers, counselors and school nurse to discuss his Individualized Health Plan and scheduled an in-service to discuss Benny’s bleeding disorder. The district nurse, who has been really great to work with for years, called and to say that she felt very confident and would take care of educating the rest of the teaching staff unless I felt strongly that I needed to be there. I took a deep breath on that one and chose to let it go. Benny’s 14-years-old now; he can speak up for himself, right? 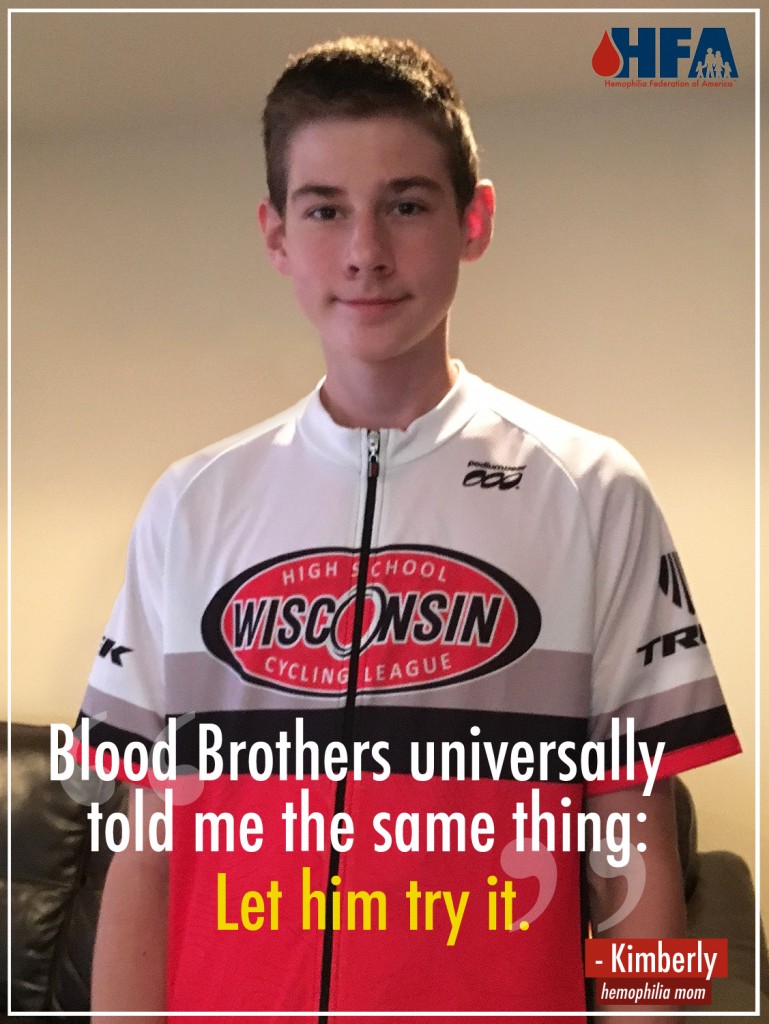 At registration a few weeks ago we toured the various clubs and organizations that kids can join. Benny had a laser eye for one thing: the Biking Club.Â  He’d mentioned interest last spring but my husband and I were very hesitant. Mountain Biking and bleeding disorders?! I looked it up and while bicycling is rated safe to moderate, mountain biking is not on the ideal list of sports for someone with a bleeding disorder. Why doesn’t he want to be a swimmer? Last spring I said we would see, but I admittedly had hoped it would simply be forgotten.
Nope. He circled the table, picked up the flyer and just stood there, looking at me with that scowling and defiant teenage look.
He has always liked bicycling and we have encouraged it on the paved trails by our house. What were we to do now? When Benny was 6 he started Taekwondo. It has been really good for him and he earned his black belt last year. When we went down that path, I asked a lot of questions. I reached out to his clinicians, the instructors, other families, and Blood Brothers for guidance to help forge a path that was right for Benny.
So, I started asking questions again. I spoke with a nurse and his coaches. The coaches have been very helpful and supportive, sincerely wanting to learn about hemophilia. They even loaned Benny a mountain bike for a few weeks and encouraged him to come to some practices and just try it out. They work a lot on biking skill building and do club rides as a group.Â  While winning is certainly always in the air, the core of this group is quite obviously developing a life-long love of riding, building good health and supporting each other as a team. We liked what we saw and heard.
Then it was time to connect with some Blood Brothers. So many times over the past fourteen years I’ve gotten the “reality check” from our community of adult men with a bleeding disorder. They understand and know what I do not. They have been right where Benny is now: a teen learning his own path. I joke often about the ‘Mom Intervention,’ a group of our Blood Brothers had with me six years ago that pushed us to send Benny to camp. It was utterly the right decision and has been a very positive and maturing experience for Benny each of the six years since and I’m thankful we listened to the guidance. Like so many of our kids, he looks forward to camp all year long.
What did the Blood Brothers say about mountain biking? Each conversation was like an echo. Blood Brothers from around the country told me basically the same things in their own way. They universally asked if the coaches were supportive and taught good skills. Then they laid it on the line to me: Listen to Benny. He really wants to do this. There are precautions to take but ultimately he’s growing up and he’s going to try things. Give him tools and encourage him to choose to make smart choices. If we don’t support him, he will almost certainly find something else to try and probably won’t tell us about it until after the fact. Which way do we want it to play out?
Right or wrong, he is going to try mountain biking. Ben says it is hard work but that he really likes it. We ordered him a mountain bike last week.
Are we taking every precaution? We think so. He isn’t using any more factor, but we did swap his prophy days so his factor levels are higher on bike days. Are we in love with Benny mountain biking? No comment. Do we need to let Benny stretch his wings? Yes, we are still going to be here but learning to let go.
P.S. Thanks for the latest Mom Intervention and the inspiration from our community Blood Brothers. Michael, Andy, Chad, Matthew, Ray, Dan, Barry, Paul… your mentorship matters!
Resources:

Again, before beginning any new activity: