Infusing Love: A Place of Comfort

It’s that glorious time of year when pumpkin fever has taken over and everywhere you look is pumpkin this and pumpkin that.Â  Local farmers’ markets are overflowing with a fall harvest of crisp apples and colorful displays of squash and gourds.Â  Overindulging on warm apple cider donuts is accepted as a guilty pleasure, marking the season of leggings and yoga pants.Â  It’s also that time when the motivation of the new school year has worn off and emotions are high from homework stress and social pressures.Â  Even with the best intentions, scheduling conflicts arise as outside activities and personal commitments fight for datebook priority.Â  By early October, easygoing, balmy endless summer days have morphed into, nippy, strategically planned, time bending acts with 4:45 am wake ups and drive-thru dinners.
At this point in a new school year, I’ve usually held the informative Hemophilia 101 talk, complete with visual aids and helpful resources.Â  Morgan’s new teachers and staff would get a crash course on her medical condition and I would get the benefit of meeting most, if not all, of her new teachers before the school year took off. I have always found it a tough balancing act to explain the serious potential risks of a severe bleeding disorder, while at the same time reminding them that she should be treated like any other student.Â  Just as we expect the leaves to change, during the week following our “hemo talk”, I can rely on a sudden onset of unnecessary icepack or band-aid visits to the nurse.Â  Soon followed by a predictable call that goes something like this, “Hi Mrs. DiPrima, this is not an emergency, but we have Morgan in nurse’s office, and…..”.
After several false alarms, it makes one wonder if Morgan has learned the age-old skill of ” Playing the CARD”.Â  With good intentions, her hyper-vigilant teachers would execute the emergency plan they had just received and send her straight to the nurse’s office, without hesitation or questions.Â  By February, and after many false alarms, I would begin to feel like I was coming off as a careless or neglectful parent who couldn’t be bothered when a call came from the nurse.Â  After several questionable concerns turned out to be fabricated stomachaches or falls, I was sure that Morgan’s fight or flight tactics were likely a result of a fall out with a peer and actually had nothing to do with her physical health.Â 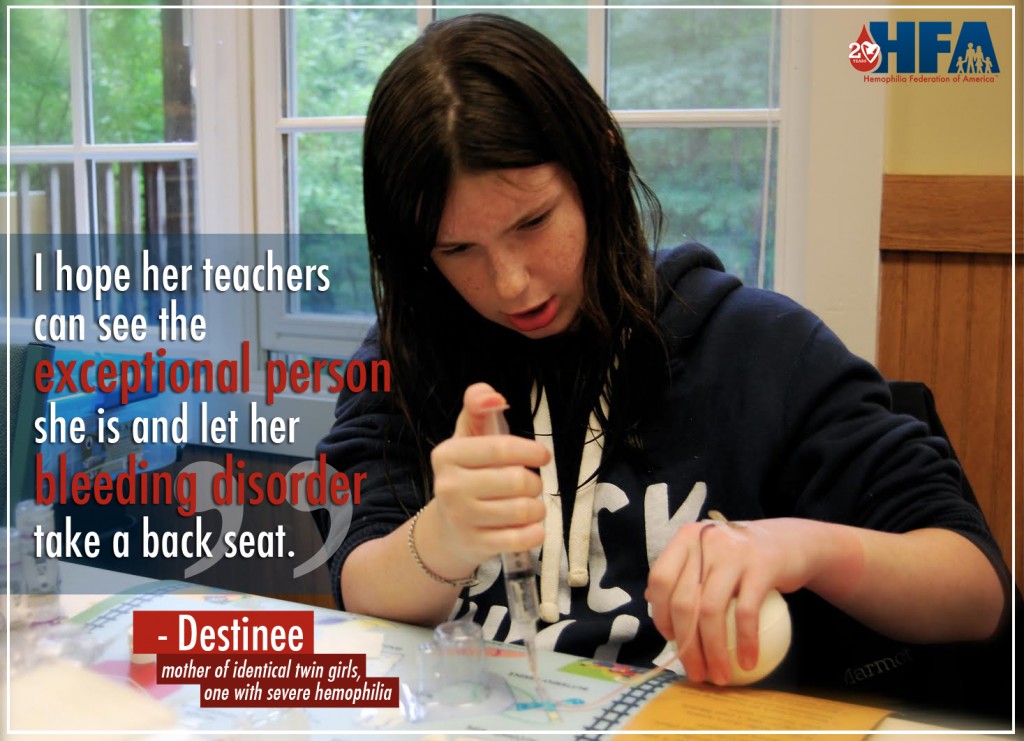 Morgan’s non-verbal learning disability and autism spectrum disorder (Aspergers, AS) impair her social reciprocity and ability to develop peer relationships. Common teenage communication can be much more difficult for her to process, leaving her mentally drained.Â  It’s almost as if her peers speak a foreign language and she only understands a few words. Missing the non-verbal cues, such as body language and tone of voice that can make up 90% of communication, leads to misunderstandings and peer rejection.Â  This can result in heightened anxiety and outbursts of socially unacceptable defensive reactions. (Think Will Ferrell in the movie “Elf”)Â  A trip to the nurse has become a coping strategy to escape overwhelming situations during school.Â  Her bleeding disorder is a magic free pass to the nurse and her teachers responded in the way they were instructed to.
After a combination of conversations at home with me and Dad, regular therapy and communication with her school counselor and nursing staff, Morgan eventually admitted and took ownership of her little, but powerful white lies. By the end of the last school year her visits to the nurse became less frequent.Â  However, I knew I would be fooling myself if I thought they would end completely.Â  After summer camps, small get-a-ways, beach days and cookouts, before I knew it, school was back in full swing and her next IEP meeting was fast approaching.
Morgan is now in her second year at a therapeutic high school for students with language-based learning disabilities.Â  Since the nurses and administrators are already familiar with her medical issues, I decided to forego the formal talk and give Morgan a chance to be seen by her new teachers without the preloaded hemophilia lens. Out of respect for the IEP process and the staff, I have learned over the years that this is not the time to bring my own agenda to the table as it leads to unproductive meetings.Â  Typically, scheduled IEP meetings will have a Written Prior Notice that clearly specifies the purpose, who will be there and the time allotted.Â  If time runs out, a new meeting request will have to be processed. That can take weeks.Â  One of Morgan’s regular teachers will usually be present, representing the rest, along with other members who make up her team.Â  These can include, but are not limited to, various special education personnel, outside evaluators and counselors. 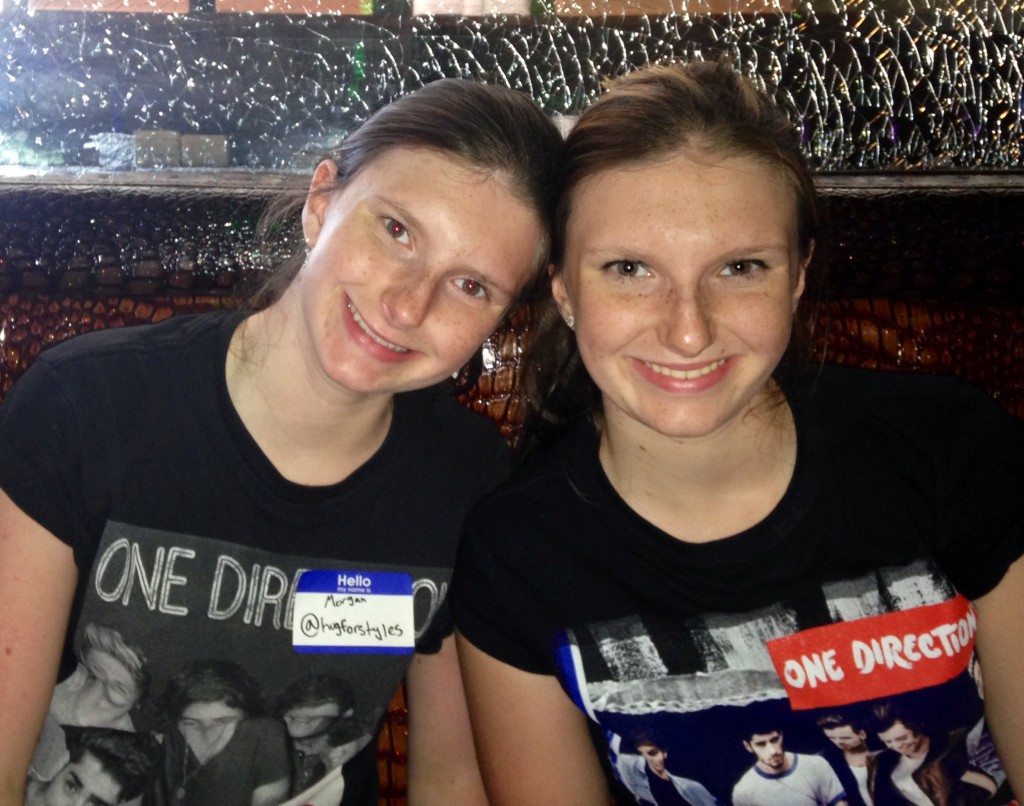 Also in attendance may be my husband, myself, an School Administrative Unit representative from our local district, and anyone we wish to bring in for support such as educational advocates and therapists.Â  Most schools must fit in several meetings each day with little wiggle room for extra time.Â  During our most recent meeting, I briefly mentioned that I had forgotten to schedule a time for my annual hemophilia talk and was considering not having one.Â  After the meeting concluded, her in-school counselor suggested a plan to keep Morgan from leaving class and limit her nurse visits to genuine health issues.Â  Acknowledging that she is maturing and has never had a problem expressing herself, this new approach sounded like a great way to give Morgan more ownership of her actions and build her self-awareness skills.Â Â  I believe that this year, I have been spared a bit from the rush of nurse calls that have become expected after the hemophilia talk.Â  Yes, there have been some calls, all of which were important for legitimate reasons.Â  Her current teachers are now aware of her bleeding disorder, with Morgan’s disclosure and a simple modified emergency plan drawn up by her counselor.Â  I am confident their communication with the nursing staff will adequately serve Morgan’s non-emergency needs without a nurse’s visit. In case of a true emergency, her Emergency Medical Plan will be followed, as it should be.
Many of our children find comfort at the school nurse’s office; it often becomes a familiar place where they feel understood and nurtured.Â  Our kids’ lives are saturated with medical lingo so it makes sense that a quiet nurse’s office with beds and snacks can provide an escape during times of overstimulation.Â  This is especially true when your child is already highly sensitive to their environment and lacks the proper skills to cope.Â  As in elementary and middle school, the nursing staff at her high school will get to know my daughter very well.Â  While this is great, it also has become an avenue for avoidant behavior and missed classroom instruction. With the new approach we’ve taken this year, I hope her teachers can see the exceptional person she is and let her bleeding disorder take a back seat while she gains the proper skills to reach her full potential.
Destinee lives in New Hampshire with her husband, Ken, and twin daughters, Madison and Morgan (14).
__________________________________________________________________
*Note: “Infusing Love: A Mom’s View,” is a blog collection of personal opinions and a representation of individuals experiences. While extensive efforts are made to ensure accuracy of the content, the blog entries do not represent HFA or its Board of Directors. The blog is also not intended to be construed as medical advice or the official opinion/position of HFA, its staff, or its Board of Directors. Readers are strongly encouraged to discuss their own medical treatment with their healthcare providers.