I’d be lying if I said my nerves weren’t through the roof upon entering the gates to the Taylor Family Foundation’s Camp Arroyo. To say that going to a family camp took me out of my element would be an understatement. I had no idea what I was getting myself into or what to expect. However, I was surprised. What I found was a group of people that made us feel welcomed, safe, loved, and most importantly heard.
We were originally approached about going to a camp for hemophiliacs, at Hemophilia Foundation of Northern California’s holiday party. Upon hearing the suggestion, my first reaction was to say no. I have social anxiety and don’t tend to put myself in situations where I can’t determine the outcome. But I was told the experience would change Scarlett in a way that only camp can, and that we had to experience it for ourselves.
So Scarlett and I headed off to family camp after the first of the year. She was beyond ecstatic and felt like this was something we could bond over . . . just the bleeders. We decided the first time Scarlett experienced Camp Arroyo, it should be an experience just for her. My husband and 2-year-old son stayed home and us girls headed off to a weekend in the woods.
Nestled in the hills of central California was a secret getaway filled with hiking, campfires, rock wall climbing, arts and crafts, zip lining, and countless other activities to keep any child entertained. All while providing the perfect opportunity for parents to get together and share their stories, learn from one another, and bond over meeting someone who finally knew what they were going though. 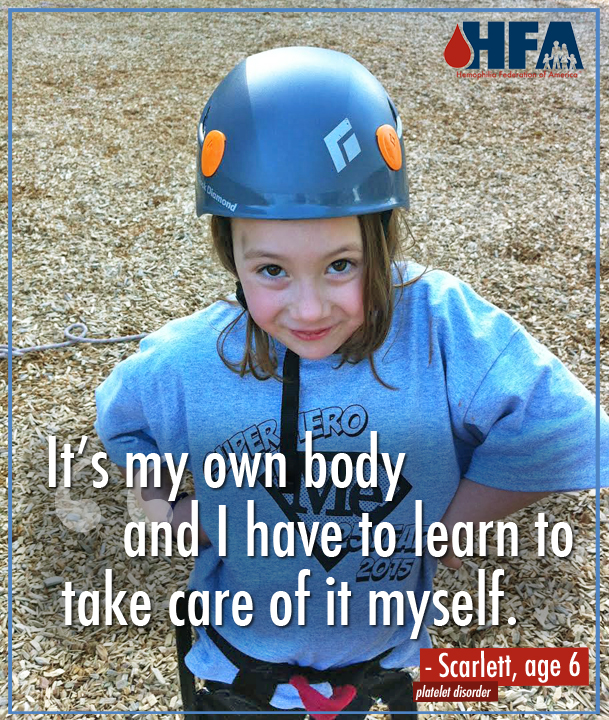 In all honesty, the thought of living in a cabin with two other families was something I wasn’t jumping at the chance to do. But friendships were made and hearing the chitter chatter of the girls laughing and talking on the top bunks made it allÂ worth the sleepless nights.Â  Scarlett made instant friends with the girls that were in our cabin. She finally got to meet others with a bleeding disorder and it was obvious that meeting other kids, (affected or a sibling of) gave them all an instant bond.
The first day that we were there was a bit intimidating. Prior to camp I had only met a few other families once at a holiday party and through Facebook, so I hadn’t made any “real” friends yet in the community. I was walking into it completely alone. I quietly sat at the table just soaking it all in and then eventually, the bonding started.
Once one family started talking to me and after hearing our story another family would join, then another.Â  Soon I was sharing our story and meeting all sorts of people.Â  As always, there were many that hadn’t even heard of Platelet Storage Pool Disorder (PSPD) or what that meant. But still the similarities were there and it was very comforting to finally not feel alone.
Over the course of two days it was amazing the friendships and understanding that were gained.Â  The parents were able to become aquatinted and gain knowledge by sharing stories of sports incidents and day-to-day situations, while the kids were gaining self-confidence and overcoming obstacles with their peers. Speakers came in and spoke to us about the importance of dental health, opportunities for involvement, and the newest trends in helping to treat bleeds with Kinesio tape.
And I was forced to cut the cord and let Scarlett adventure off into the unknowns of camp with me not by her side.Â  She was able to make goals for herself on the rock wall, climbing further and further every time, and was ecstatic once she was given the opportunity to show me all that she had accomplished. It was a wonderful balance of learning to spend time apart while still leaving plenty of time to spend together.
It was obvious the impact camp had on Scarlett soon after we returned from camp. She was able to communicate aspects of her bleeding disorder she had not yet expressed and that had been bothering her at school. She came back with the tools to defend herself, sense of confidence and maturity that proved she was ready to move onto the next chapter of her bleeding disorder.Â  Scarlett learned to say things like, “It’s my own body and I have to learn to take care of it by myself” and “the other kids make me feel like a baby when they tell me I can’t do things.”Â  She even went on to explain that she knew that her classmates were just trying to be nice and take care of her but it still bothered her and made her feel “like she was different, and babied more.” Those are pretty profound words coming from a six year old.Â  Soon after that conversation we were able to change some aspects of her 504 plan, gave her some vocabulary to use during a time when she’s feeling that way and have been encouraging her to grow with her bleeding disorder.
I wasn’t jumping at the opportunity to go to camp, but I am so glad that I did. Stepping out of my comfort zone paid off tenfold and I wouldn’t trade the experience for the world. I encourage those affected by a bleeding disorder to seek out a family camp for bleeding disorders near you. You can find information by searching HFA’s camp directory or contacting your local hemophilia organization. The knowledge, friendships, and emotional gained, is something I think every family affected by a bleeding disorder should experience firsthand.
Kari lives with her husband, Ryan, and 6 year old daughter, Scarlett, and 2 year old son, Walker, in California.