I lost my job on a Monday. The following Tuesday, I was making the hour-long trek to our HTC for bi-monthly prophy for my 15 month old son, Ben. I had a lot of time to think about what had just happened, what in the world I was going to do, and where to go from here. I’m a single mom to three kids: my daughter will be 3 years old on Halloween and my twin boys (Ben has severe B) were born on the 4th of July. To add insult to injury, in addition to losing my job, I also lost my housing, since I lived and worked on a college campus, and we need to be out of our house by Dec. 22. The Christmas presents I’ve started to buy will stay in their Amazon boxes until I figure out what we’re going to do next. Oh, and did I mention that my mom, who lived with us and helped take care of the kids while I was working, died unexpectedly this year? I’m in a tough spot, but I have learned some things about resiliency from Ben that I’d like to pass along. Whether you find yourself in a similar position with a career change, or just have your own roadblocks to get over, I hope you will see these truths in your life as well.
This does not define me.
Ben is not yet old enough to understand when I tell him his hemophilia doesn’t define him, but it’s true. His teachers listen when I tell them, thankfully. When he first started in day care at 13 months old, his teachers handled him with kid gloves. They nervously called me with every bump. One time he tripped on the playground and landed on his face and his nose was gushing blood. His teacher called me to ask if he needed an ambulance. I took a deep breath, asked them to put pressure with a cold compress on it for 10 minutes, and to call me back if it didn’t stop bleeding by then. They called me back in eight minutes to tell me it had stopped and he was playing like nothing ever happened. It was also the day after a prophy day, so I knew it would stop sooner than later. It was his first bleeding episode at school, and his teachers handled it like champs. He was wearing his helmet when he fell, which probably prevented more injury, but it can’t prevent all injury. He was out in the playground later that afternoon. If they had gotten scared that he “might fall” again that day, and not let him out on the playground, it would have been detrimental. Not only is he a toddler boy with lots of energy, he needs to be outside with his friends. The chance of him falling and bleeding again is high, but his teachers and I cannot let him live his life in fear of that. He is not a hemophiliac toddler; he is a toddler with hemophilia. His condition does not define him. 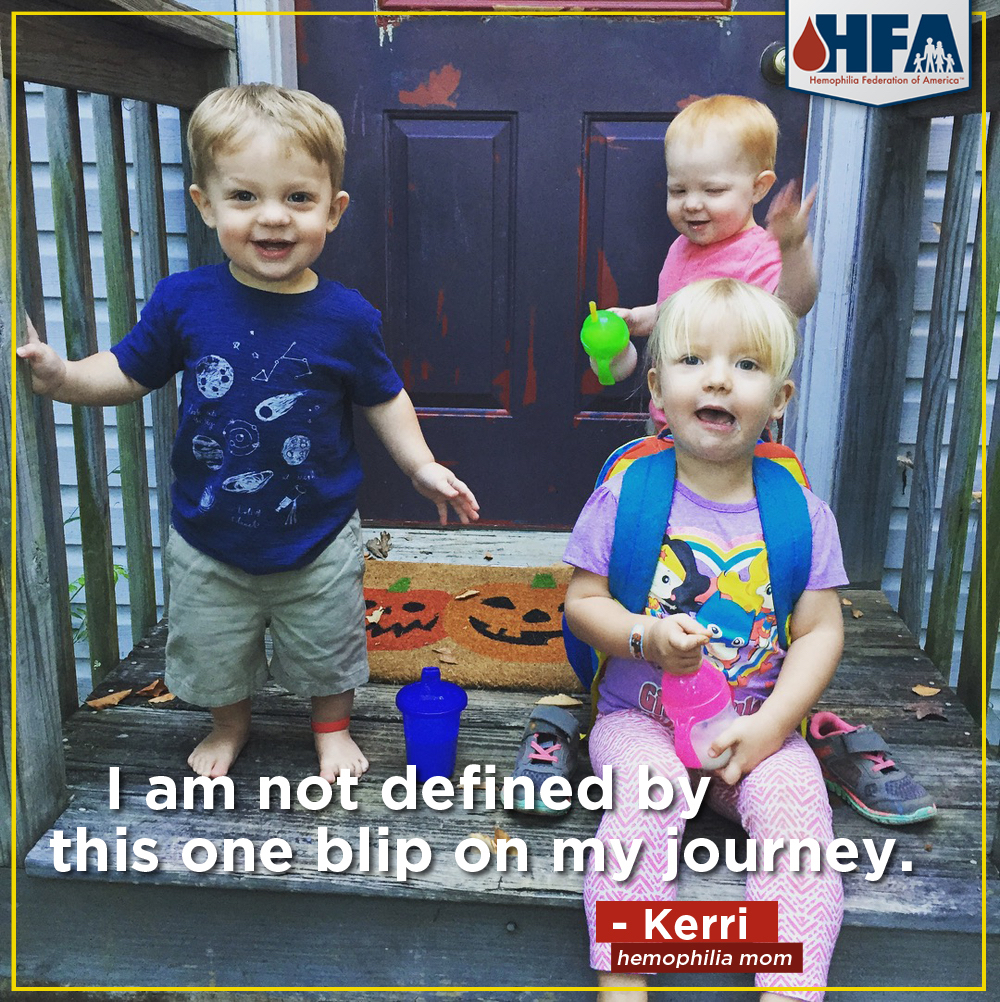 Likewise, losing my job does not define me. It’s very easy to fall into a rabbit hole of self-pity and wallow in self-doubt. My termination was not personal; it was a business decision while a major restructuring effort is underway. I still have value and can contribute to the working world in meaningful ways. I am in an unique position to recreate myself, to see what else is out there, to find a new space for my talents and skills. I’ve thought about creating a consulting firm, switching to a new functional area within higher education, maybe even getting out of higher education altogether. I know that ultimately, I will find an opportunity I am excited about and it will be the right fit for my family. I am not defined by this one blip on my journey.
It’s gonna hurt.
Normally, Ben’s nurses can get his IV on the first try. Rarely, it takes two tries. This week, however, it took four sticks and five nurses. Each stick means Ben is being held down by strangers, and he hates it with a fiery passion. Sometimes the thing that’s best for us hurts.
The first thing I did when I returned home after losing my job was email our HTC coordinator to tell her. She immediately put me in contact with someone else in the HTC, who sent me gas cards and asked what she could do to help me. I had already enrolled in our manufacturer’s copay assistance program, so Ben’s factor wasn’t costing me anything up front. I had the foresight to enroll in the additional program that will cover factor in its entirety in the event I lost insurance (if you haven’t done this, please do, regardless of your employment status).
Losing a job is officially not fun. That meeting with Human Resource was officially the most not fun I’ve ever had. Cutting unnecessary things out of my budget, crunching the numbers, and pinching pennies until I get a new job will not be fun. But, I know in my heart of hearts, that…
It’s all for the best.
Getting poked by needles every two weeks is not fun. But until someone invents a less painful method of delivery for factor, Ben will continue to get prophy. The sticks deliver life-changing medicine to him, and it’s over almost as quickly as it begins. As soon as I pick him up after the factor is infused, my sweet boy is smiling, happy, and content. He has little speed bumps to get over every two weeks and he greets them with clapping hands and the biggest toothy grin you’ve ever seen.
I know in my heart of hearts that something better is coming for me professionally. I know I am being set up for the next great work opportunity. I am trying desperately to relish this time I have to discover my next step. I might try some hot yoga in-between job searching. There are a few good books I’ve been meaning to read. Self-care will be a nice thing to try. I haven’t really had a chance to grieve the loss of my mom, and now I have to grieve the loss of my job, too. Whatever happens next will be great, I just know it. Cheers to whatever that may be.

Kerri lives in central Virginia with her daughter, Adeline, and twin sons, Edward and Benjamin.
*Note: “Infusing Love: A Mom’s View,” is a blog collection of personal opinions and a representation of individuals experiences. While extensive efforts are made to ensure accuracy of the content, the blog entries do not represent HFA or its Board of Directors. The blog is also not intended to be construed as medical advice or the official opinion/position of HFA, its staff, or its Board of Directors. Readers are strongly encouraged to discuss their own medical treatment with their healthcare providers.