It’s that time of year when boys and girls go to summer camp. Church camp, art camp, band camp, sports camp and yes, hemophilia camps. My idea of camping and “roughing it” is when we stay at a hotel that is not a “suite.” When my oldest son, Julian, was nearing the age of 8, everyone in the community talked about camp and how important it was for our kids. They explained to me that the kids learned how to self-infuse. I thought to myself, “Are you kidding me? My 8-year-old sticking himself?!” It was too much to comprehend.
I trusted my bleeding community family and signed Julian up to attend Camp Ailihpomeh (hemophilia spelled backwards). It was only March, but the idea of my child being away for an entire week was upsetting! My husband had a brilliant idea and booked us a cruise to Mexico while our son was away. It was a great plan. I remember waiting each night to get on the computer in the business center on the ship. We would anxiously wait for pictures from that day at camp to appear.
There he was, my Julian, holding up a sign that said “#1” looking very proud. I didn’t realize until we were home that he accessed his “Annie” (anicubital vein) on the first try. When he came home he was a different little boy. He was empowered. He was surrounded by other boys that dealt with many of the same issues and he realized he was not alone. Fortunately, he attended camp for a few more years and truly learned how to be independent with self-infusing.
And then there is Caeleb. My mighty warrior has dealt with the “worst of the worst” when it comes to living with an inhibitor. Last summer, the HTC felt like he was in good shape to attend camp for the first time at age 10. For months leading up to camp he talked about everything he was 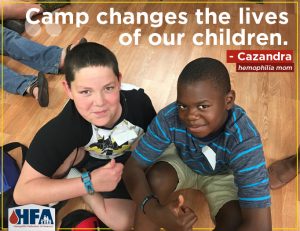 going to do. He dreamed about sleeping in the top bunk, going swimming every day, and riding horses. Two days before camp, his bags were packed. On a whim, he went ice-skating with my husband, fell, and broke his wrist His dreams of camp disappeared for the summer and his brand-new sleeping bag went into the closet.
This year was going to be different. Caeleb’ s health has been better than it has been in years, he had attended the “Infusion Bootcamps” that were offered by HFA and the Sangre de Oro chapter, and his success with infusing was stellar. He was ready and his sleeping bag was ready to go.
The day came and he and his friend, Ben, found out they would be cabin mates! It just couldn’t get any better! I gave him a kiss on the top of his head, breathing in the sweet smell of my son (before he started “smelling” like camp) and told him to have a wonderful time. I wasn’t worried. He was in the hands of some of the best clinicians around. He was going to have the time of his life. After all the pain and suffering he has endured over the years, he deserved a week of fun.
On the morning of the third day of camp, my phone rang. It was not a familiar number, but the exchange looked like it could be from the hospital. My heart sunk. It was his hematologist at camp. Caeleb fell down a flight of stairs, hit his head, cut his lip, and had a broken arm. The ambulance had been called and my husband and I were to meet them at the emergency room over 3 hours away.
Are you kidding me? Could this really be happening?
It was the longest ride I have ever driven. The last 15 miles may as well have been 100. When I found him in the emergency room, he was all smiles, with his banged-up face. I grabbed him with tears in my eyes telling him, “I got here as fast as I could.” “Mom, I’m okay,” he reassured me with a great big smile. Dr. Shirley Abraham and nurse Janet Ratte were with him and greeted me with a hug. “He has definitely kept us entertained,” they said. As they waited in the emergency room they feasted on food from SONIC and laughed. I was so worried that my son’s heart would be broken about having to leave camp that I had forgotten how resilient he was.
The sleeping bag is back in the closet in the hopes that next year it will see an entire week of camp. But what I know for sure is that camp changes the lives of our children. Sometimes it’s not exactly the experience we hope for, but the lessons that are learned empower our kids to mighty individuals.

Cazandra lives with her husband Joe, and 20-year-old son, Julian, and 10-year-old son, Caeleb, in New Mexico.
*Note: “Infusing Love: A Mom’s View,” is a blog collection of personal opinions and a representation of individuals experiences. While extensive efforts are made to ensure accuracy of the content, the blog entries do not represent HFA or its Board of Directors. The blog is also not intended to be construed as medical advice or the official opinion/position of HFA, its staff, or its Board of Directors. Readers are strongly encouraged to discuss their own medical treatment with their healthcare providers.