“So, he’s still wearing the helmet?”
The question, posed by HTC staff at our recent annual visit, gave me pause. Yes, my son is almost 5 years old and still wearing his helmet any time his feet are on the floor. I know this is a controversial topic. I’ve seen the comment threads on many a Facebook post with vehement supporters from every perspective.
Liam isn’t a great listener; as I said, he’s almost 5 and not listening seems to be a defining characteristic of that age. He’s fiercely independent, and will remind you every time you make a request of him. Asking him to put on his shoes each morning can result in any number of actions, including snuggling the cat, decorating the tree, grabbing some candy or hiding in the corner; I can only guarantee that it will not be putting on his shoes. We had a 40-minute standoff the other night as both Nick and I tried to convince him that the 5mL of cough medicine we needed him to take wasn’t poison. But there are two things he does without any pushback: wear his helmet and sit still for his infusions. And you’d better believe I’m not planning to mess with either of those wins!
We were nervous about him wearing the helmet all the time. I didn’t want him to be clearly identified as different, but we needed him to be safe. On our trips to the playground, Nick and I often over-explained to other parents we 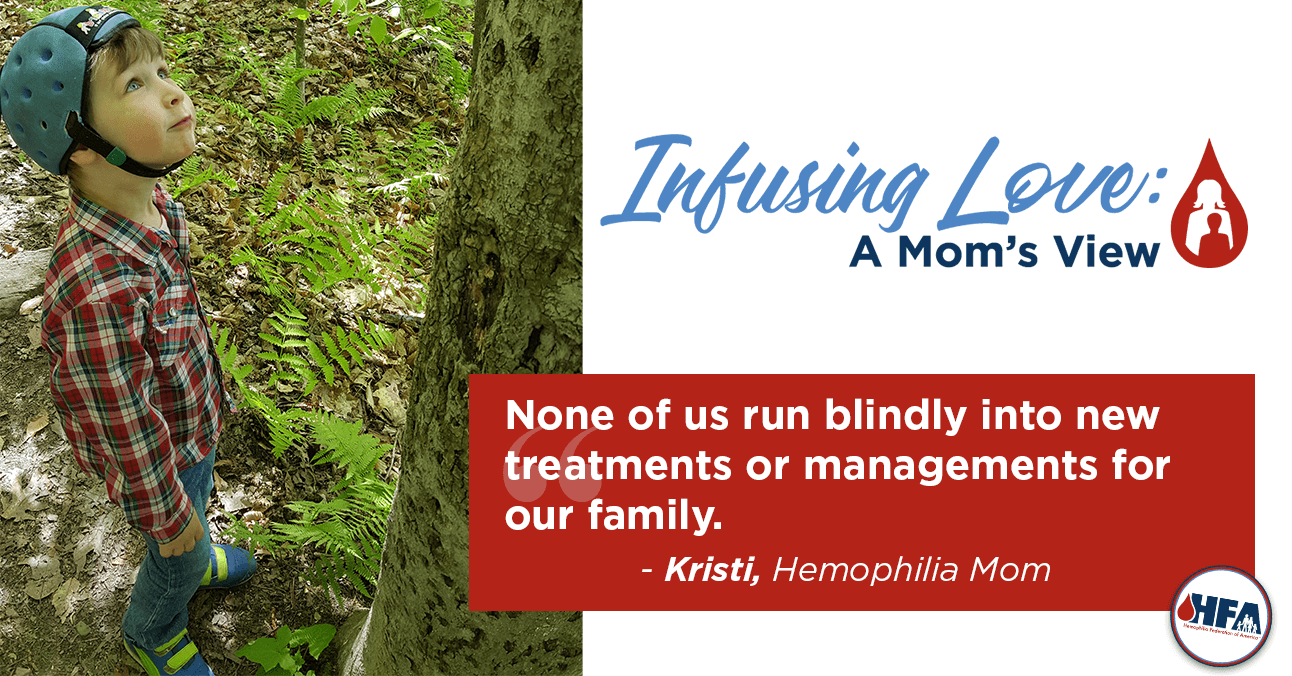 encountered: “Hi, we’re not weird and overprotective, he has
a rare bleeding disorder so we have to protect his head!” usually said in one breath and not at all convincing our new parent friend that we were not crazy. When he went off to daycare at 3 years old, I thought he might feel self-conscious, but the teachers were so understanding and welcoming. They compared the helmet to glasses. It’s something that some kids need, but some don’t. Liam talks to new kids easily when they ask about it. He says, “I have hemophilia and I need to protect my head.” Now, I know this soft helmet isn’t going to protect from major trauma, but it’s saved him many goose eggs and other near misses! He walks and runs without issue, but like most toddlers learning how to use their body, there were times when he would fall over for no reason. The helmet was an additional layer of safety for him, and for us.
As with most parenting decisions in the modern age, everyone has an opinion about the choices you make. When Liam was under a year old, I posted a question in a hemophilia Facebook group about knee pads and was astounded at the response. A few were helpful and offered suggestions, and others…well, others were not helpful. The comments came in several flavors: one school of thought said it was unnecessary and I was overreacting, another group chimed in to say they/their family members had gone without protective gear and turned out just fine, and then the third group was just awful. These folks had decided they knew everything about me and the choices I was making for my son based on a Facebook question. I got messages and comments calling me irresponsible. I was confounded; wasn’t this a group for parents of hemophiliacs to get advice and commiserate? I do not actively participate in this group any longer, but still “lurk.” I decided never to comment again after someone said that peripheral access for infusions was tantamount to child abuse. What?
Despite these experiences, I was surprised to see the online reactions to two recent major announcements. When announcements about the apparent successes of these two innovative treatments for hemophilia A made their way to the internet, there were mixed reactions in the groups of which I am a part. Some folks, like me, are cautiously optimistic about a new way to approach treating factor XIII deficiency. There has not been a true innovation in treatment since the development of synthetic factors, so my family looks forward to seeing how these treatments fare outside of a clinical trial setting. Just as with any issue on the internet, though, some conversations devolved quickly into name calling and comment flaming just because individuals expressed their excitement about these announcements. It was bizarre to see members of our community discussing new possibilities, some not even commercially available yet, and being attacked because they were “too excited” or “not cautious enough.”
I don’t think that any of us in the hemophilia community run blindly into new treatments or managements for our family members. We are careful, cautious, and can understand entries in the New England Journal of Medicine better than the average adult. However, the rabid need to put down the choices of others simply because you disagree with them is unacceptable and unbecoming to this community. I recognize that fighting on the internet is unfortunately now a way of life, but do we have to perpetrate this behavior by being judgmental? Parents, grandparents, sibling, we are all in this together to find the best way to raise our children safely, with an eye on the future and the good things it can bring while being mindful of the lessons learned in our past. Let families make the choices that are right for them, without your own bias getting in the way. Or, as others might put it, if you don’t have something nice to say, don’t say anything at all.
As for the helmet? Well, Liam asked me about it this morning as we came downstairs to start our day. He said he knew he wouldn’t have to wear it when he is a grown-up (being a grown-up is very appealing to him these days). I replied that he probably won’t wear it when he starts kindergarten in the fall, except on the playground. He heard me, but didn’t reply. Knowing how he thinks about things, I expect the topic to come up again in a few days after he has time to digest it. I think it may be difficult for him to let it go, since it’s been a part of his life as long as he can remember. I hope he can appreciate it for what it has done to keep him safe, even if it only played a small part in his life so far. I know that as parents, any awkward conversations or strange glances we may have experienced were well worth it.

Kristi, her husband, Nick, and son Liam, live in Vermont.
*Note: “Infusing Love: A Mom’s View,” is a blog collection of personal opinions and a representation of individuals experiences. While extensive efforts are made to ensure accuracy of the content, the blog entries do not represent HFA or its Board of Directors. The blog is also not intended to be construed as medical advice or the official opinion/position of HFA, its staff, or its Board of Directors. Readers are strongly encouraged to discuss their own medical treatment with their healthcare providers.