Infusing Love: Do I Get Used to It?

I’ve seen a recurring question in the bleeding disorders community a lot in the past few weeks:, “Will I ever get used to sticking/poking my kid?” The answer is yes and no. Think about it — there is nothing normal about sticking your child with an IV needle or accessing their port to infuse them once, twice, or multiple times a week. I remember past trips to the playground with my son and hearing other moms talking about how hard it was for their child to get their immunization shots. I laughed to myself while thinking, “At least you don’t have to give your kid an IV infusion.” Even to this day, I still roll my eyes when I hear the same conversations.
Jackson was given his first dose of factor when he was three days old after having a soft tissue head bleed from being delivered. From then on he was on prophy at least once a week, which increased as he got older to three times a week. Early on I remember thinking as his care team infused him at the hospital “this is now our life.” It was a lot for me to deal with. On the drive home I would be in a dark place while my son was either peacefully napping or sweetly cooing; he had already forgotten about it.
As he reached his toddler years, infusions became his routine. We would drive to the HTC and Jackson would walk into the hospital like he owned the place. We got to know the check-in staff and all the nurses. He had everyone wrapped around his finger! Child Life knew what toys he preferred and would reserve them in a special place for him. The nurses even made a “factor book” for him that went through each step so he could look at it during infusion time and know what was coming. It was a way for him to understand why we were “hurting” him, yet at times he still kicked and screamed. 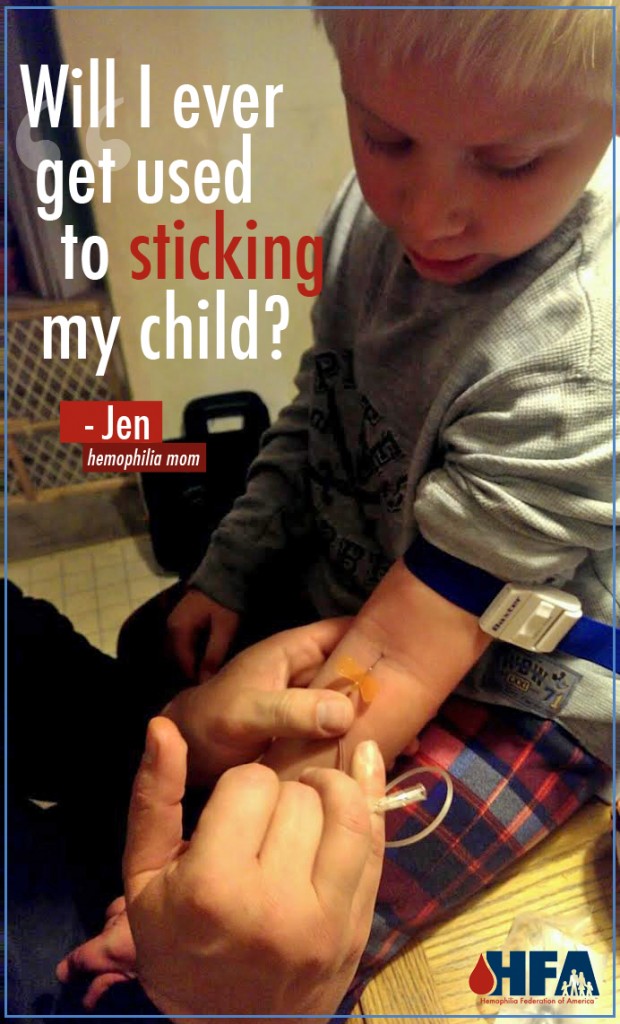 In his pre-school years we transitioned to a combination of home care and HTC visits. The home visits were liberating now that we only had to drive down to the HTC once a week. We had good pokes and bad pokes…and that still happens. We worked as a team: the home health care nurse, my husband, and I. The nurse would do the stick, I would hold, sometimes restrain, Jackson, and Joe would play the role of distracter and factor administrator. My husband did some pretty funny things back then with bubbles, songs, dances, and funny faces! I’m not sure who he entertained more…the nurse or Jackson!
As Jackson got ready to transition into all day Kindergarten, my husband and I became the infusers. This has proven to be challenging as well. Jackson is now older and knows his routine so he is able to sit very carefully during his infusion. Sometimes he shows interest in mixing his factor, drawing up the syringe, and pushing his factor into the IV. We breeze through the process as a team and it’s done. Then there are times that, for whatever reason, it’s just a bad poke, the times when the first attempt doesn’t go well.Â  The tears flow and he asks why he has to have hemophilia. I hate this part. He doesn’t want to hear about genetics or how someone gets hemophilia. He wants to know why he has to get poked. It’s like getting punched in the gut. I put on a happy face, as does my husband, and we reassure him that it’s okay, that he is a brave boy. We tell him that we hate it too, but he needs to get his medicine to go play as it protects him. We give him a juice box, then we all take a breath and he says okay. The second stick usually goes smoother and before you know it he is off and running — but not before he thanks us. Yes, he thanks us. I’m positive it’s not for hurting him or sticking him but for taking care of him; for showing empathy for what he goes through and for loving him.
The question I keep hearing in the community is not a new one; it’s probably been asked, or at least thought, by every parent who’s had to infuse theirÂ child. Will I ever get used to poking my son?Â  Yes and No; but it’s what we do and what needs to be done for him to live a healthy life.
Good luck to you in your own journey and know that others get it and we are supporting your rough days and rejoicing in your good days.
Jen lives in Ohio with her husband, Joe, and their three children: Evelyn (20), Nora (14) and Jackson (7).