Infusing Love: For the Love of Basketball

It is important for individuals with a bleeding disorder to find a form of physical activity that they enjoy. When muscles are used during exercise it helps to keep them flexible and strong. Physical activity also helps individuals to maintain a healthy weight, which keeps less stress off the joints and has even proven to reduce the number of bleeds a person may experience.
It is important for individuals with hemophilia, von Willebrand Disease (vWD), or other types of bleeding disorders to find the right form of activity for their type, severity, and body. Individuals and families shouldÂ alwaysÂ talk with their doctors or physical therapists to help determine whatÂ types of physical activity might be acceptable. Most often, the type of physical activity depends on the severity of the hemophilia and treatment options available.

Again, before beginning any new activity:

I want to pinch myself sometimes to make sure I am not dreaming. Ten years ago, if you told me I would be wearing a t-shirt today with my son Marques’ basketball number on it, I wouldn’t have believed you. My son couldn’t play basketball: he has severe hemophilia. However, today he is a starter for his middle school basketball team!
This process didn’t happen overnight. I didn’t always let him play basketball on a competitive team. When he was seven or eight years old, my girlfriend put her son on a local recreational team and wanted Marques to join. My response was quick: “Nope, he can’t play organized basketball.”Â  According to the National Hemophilia Foundations’s, Playing It Safe, Bleeding Disorders, Sports and Exercise booklet, basketball is rated at a moderate-to-dangerous sport. It continues to say that basketball is a “highly competitive, organized game where heavy physical contact is the standard – a level not recommended for people with bleeding disorders.”Â  So it is written, so it shall be! 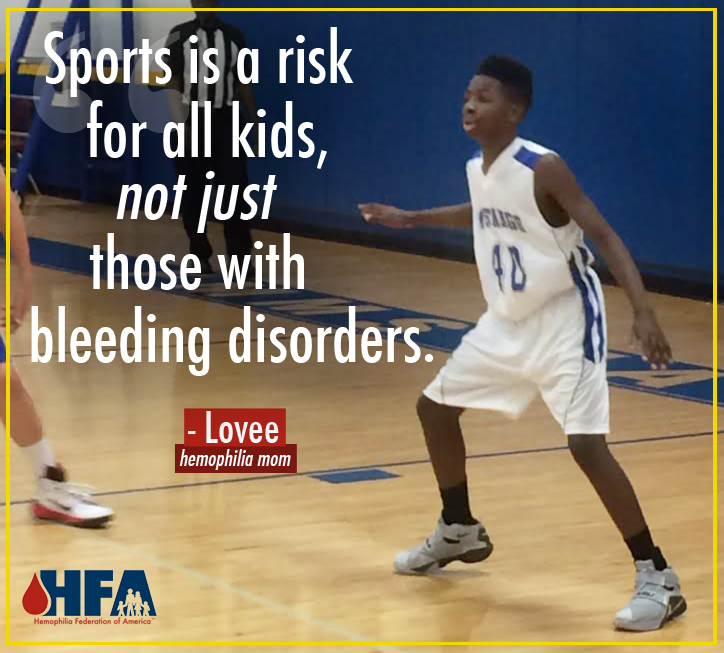 A few years ago, I changed my mind. My son’s pretty, brown, puppy-dog eyes pleading to let him play on his first basketball recreation team with his friends may have had an impact in my reversal. I gave in, but only with warnings. I had a conversation with him, as best you can with a 10-year-old, where we discussed the long-term impacts on his body and the potential bleeds he could get. I even searched for pictures of knee bleeds on Google to show him. I am blessed that my son does not have any target joints or even know what a bleed feels like: my goal was to keep it this way. Watching him play on a basketball team for the first time was like watching a caged bird free!
I have to admit that even three years later I am scared when my son is out there playing like he’s in the NBA, jumping and diving for the ball like he may lose his million-dollar contract if he doesn’t get the rebound.Â Once he hit his knees on the floor so hard that I had to restrain myself from running on the court like a helicopter mom.Â I’m sure most other bleeding disorders moms understand this feeling.Â We have been hovering over these kids since we found out their diagnosis.Â Making sure they don’t get hurt is a learned reflex for a hemo mom.Â We can catch a kid with one hand without spilling our coffee being held in the other.Â However, I don’t think my son would appreciate it when he comes down from a rebound if mommy was there with a gym mat to absorb the impact of his fall.
I’m learning that if I’m going to allow him to play basketball, then I have to allow and understand that he can get hurt at anytime.Â But doesn’t every non-hemophilia mom also have to accept that herÂ child can get hurt, too?Â My child might just need factor for his injury. There are, however, a few things that I can control.Â The first thing I did when we decided to play was to communicate with his hematologist and nurse.Â I wanted to make sure “Team Hemo” was aware of our new activities and learn if they had reservations we would try to work it out.
The second thing I do to help minimize the physical impact on his body is to make sure he stays on top of his prophylaxis schedule.Â When there is school, he has to wake up fifteen minutes earlier to infuse.
I try to keep honest lines of communication open between us. I want to make sure Marques knows he has to be honest with me if he gets hurt or starts to feel any unexplained pains.Â I try not to give him a physical after every game, but if I see him start limping I’m questioning him about what happened: when did it start? Like many kids growing up with a bleeding disorder, they learn to not tell the entire truth if they get hurt for fear that we will not let them do something or get in trouble for something they know they shouldn’t have been doing.Â I am trying to teach him that you have to communicate honestly with me so we can treat if needed.
The last thing I do, which might be the most important, is pray that he doesn’t get hurt!
Playing a highly competitive sport is a risk. It’s a risk for all kids, bleeding disorder or not. I think like any sports mom, we have decided to take the risk in playing basketball so that our children can enjoy all the benefits of playing a team sport. We’ve educated ourselves on the potential risks and are doing our best to mitigate. Some risks are okay to take – others aren’t. One day, Marques had the nerve to ask me if he could play on the middle school football team. Now that’s not going to happen: those pretty, brown, puppy-dog eyes can only get him so far!
Lovee’ lives in South Carolina with her husband, Charles, and her children, MaRee’, Marques, Laithan and Layla.