If I had a nickel for every time someone asked me whether I was sure my daughter had hemophilia, well I wouldn’t be rich, but I would certainly have a heavy load of change tearing a hole through my pocket.
Before my children were diagnosed, my only exposure to hemophilia was in my college genetics class where it was used as the classic example of how sex-linked traits get passed down.Â  Although my recollection was hazy at best, I remembered drawing out some sort of square with four boxes that showed which kids would and wouldn’t inherit hemophilia, and I specifically recalled that only the son could inherit it. Without knowing it then, this biology lesson would set the stage for important events during the next stage of my life.
I was pretty sure I had successfully tackled a significant portion of life’s challenges when I became a mother, giving birth to identical twin girls – one via natural birth and the other via emergency cesarean. I couldn’t have been more wrong! 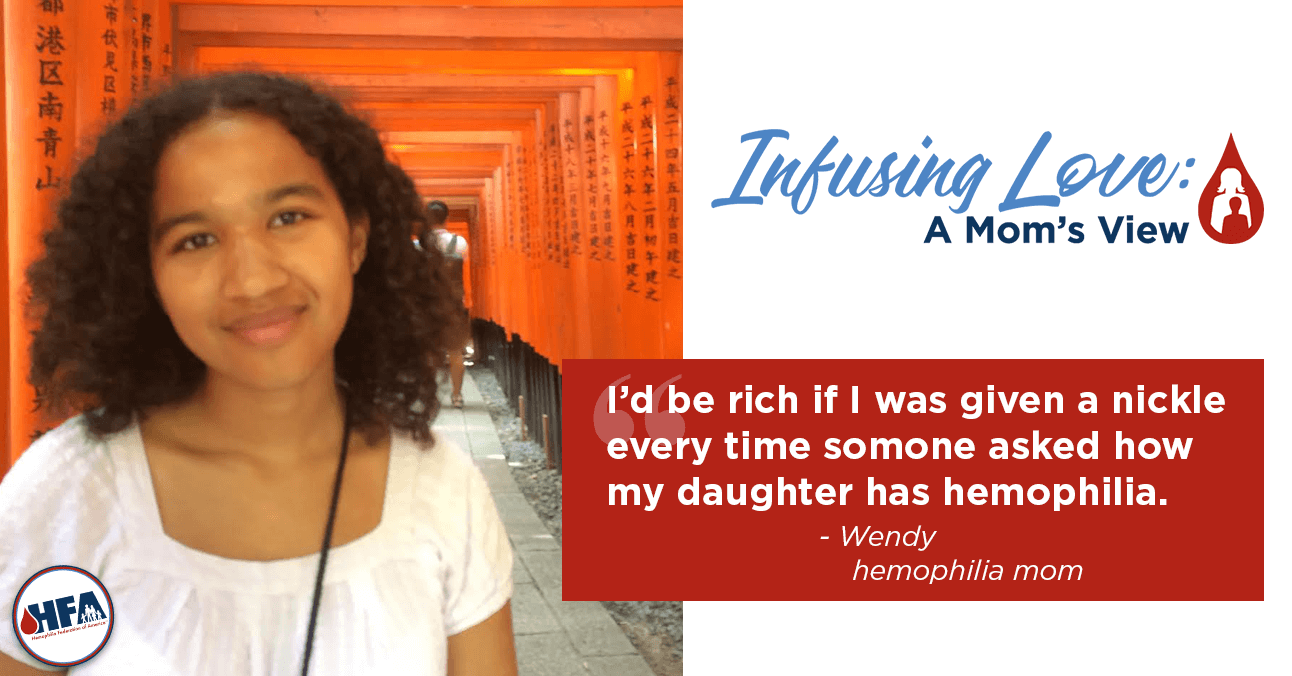 When the girls started to walk at around eleven months, the bruises and bumps started to appear on Tai-yan. It was also around the same time we hired a new babysitter, so naturally, we suspected it might be her rough handling of my precious baby girl. We let her go and hired another one, but the bruises and bumps continued to appear.
So we took Tai-yan to the pediatrician where he brushed off our concerns with a wave of his hand, stating that she was just one of those toddlers that liked to play rough. We accepted that, even though we knew her to almost always be gentle, especially compared to her twin sister, Kaya, who almost never bruised. Plus, I never even considered hemophilia since I already knew from college genetics that: a) it was an inherited condition and b) it only occurred in males. I wish our accredited pediatrician had recognized the symptoms, but he didn’t.
A few months later, her right knee swelled to double its size and had the appearance of a large peach. We went back to the pediatrician, who was quick to diagnose her as having juvenile arthritis and proceeded to prescribe a six-month dose of a blood thinner.
Miraculously, she survived the six months in the care of those blissfully unaware of her hemophilia diagnosis, including her babysitter, daycare providers, grandmother and even her own parents – all the while, running, jumping, falling and doing all the things that babies do at that age.
It wasn’t until her baby brother was traumatically hospitalized and diagnosed at twelve months of age, that Tai-yan finally received her long-overdue diagnosis of severe hemophilia at the hemophilia treatment center. She was 3 years old. We were both shocked and relieved. All of the sudden everything made sense – the countless bruises and bumps and the swollen right knee, which we would later find out was a bleed in what would become her irreversibly damaged target joint, and NOT juvenile arthritis.
It was then that I had my first of many lessons related to hemophilia. I discovered that I was a carrier as a result of a spontaneous mutation, and that I had passed it along to all of my children. I was told that my son, Khaliq, had severe hemophilia; my other daughter, Kaya, was a carrier; and her twin sister, Tai-yan, had severe hemophilia due to another spontaneous mutation.Â  So much for spontaneity!
Many times I’ve been taken back to those three years prior to Tai-yan’s diagnosis and thought, “What if and what should I have done differently?” Â There are just too many possibilities to consider, and all of them equally as confusing and frightening. Each time, I come back to one reassuring thought – she is still here, and for that we thank all of our lucky stars in the sky.
Now my little girl is not so little anymore. She just began her senior year of high school, and I couldn’t be more proud of everything she has accomplished so far and has yet to take on moving forward. Being a female with hemophilia has put her in the unique position to educate and empower herself and others. She takes that role very seriously, especially the part where she has to correct her biology teachers during the genetics lesson when they say that only males have hemophilia.
As a carrier myself and mother of a young woman with hemophilia, I’m glad to see progress, with more girls and women being diagnosed as having hemophilia and getting the proper treatment they deserve. However, the progress has been too slow and we still have a long way to go.
That is why I support and promote all of the research and data collection efforts underway in the hemophilia community, especially those that include information on females. Of the many things I have learned about the medical and scientific communities over the years the one aspect that I believe to be the most critical for change is presenting the right data. That is something we can all be a part of in one way or another, through HFA’s CHOICE project, My Life Our Future, or other studies. Of course, I also strongly believe in the value of advocacy and education, which is why I’m an active member of HFA’s Blood Sisterhood program and my local chapter.
We need to reach beyond the borders of the hemophilia community to ensure that young girls get diagnosed by their pediatricians, carriers get tested early, and OB-GYNs know how to address uncontrollable bleeding before they have to perform hysterectomies. Only then will we be able to save lives and claim progress.
Wendy lives with her three children, Kaya, Tai-yan and Khaliq in New York and is a former HFA board member.
__________________________________________________________________________________________
**Note: “Infusing Love: A Mom’s View,” is a blog collection of personal opinions and a representation of individuals experiences. While extensive efforts are made to ensure accuracy of the content, the blog entries do not represent HFA or its Board of Directors. The blog is also not intended to be construed as medical advice or the official opinion/position of HFA, its staff, or its Board of Directors. Readers are strongly encouraged to discuss their own medical treatment with their healthcare providers.