Infusing Love: I Get To Decide

I have an incredibly sweet and endearing child. I have been told on more than one occasion by his teachers that he has a sense for other children’s feelings, he knows when children are hurting, and he makes an effort to console them. I would love to take full credit for Logan’s sweet personality, but I also know that a great deal of this is due to his experiences. He understands, more than I could ever imagine, what pain is like.
We have never been opposed to sharing information about Logan’s hemophilia, but we haven’t exactly had to broadcast his diagnosis either.Â Part of that is because of his brain bleed in infancy, his inhibitor and a host of issues have made it clear that Logan was living with a medical condition. Although we never really shied away from disclosing his condition, we also did not tell just anyone. I felt we walked this really nice, straight line that satisfied all parties.
This was all true until the day where I regretted anyone having to know about his hemophilia. The day where someone other than his father or me decided that hisÂ diagnosis shouldÂ exclude him from something fun for no other reason than heÂ has hemophilia. My heart sank, raged, and wept. But most of all my heart hurt. My job as a parent had been superseded. Someone else thought they knew the answer to the question and removed me entirely, which in turn removed my child from the celebration. 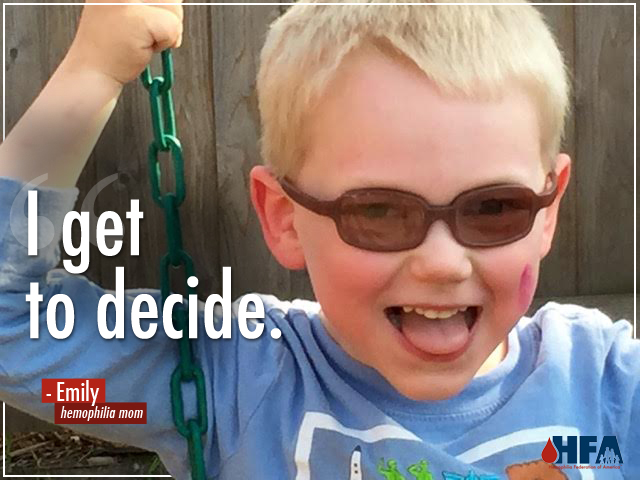 Being his mom gives me the right to make decisions. Someone else’s assumption about my child’s life and how we navigate it should not be relevant. In situations regarding invitations to play-dates and birthdays, I get to say yes or no, and I wouldn’t tell Logan about an invite where the decision was “no.” I am guarding his heart.
Yet, too often, others think they know what is best for us, or attach judgment on choices we make. I admit that I think that about other people too, for good or ill, but let’s remember that families like mine — those that deal with a chronic condition — usually deal with their reality shrouded in silence. Situations where their child is excluded are common occurrences, and are devastating to the child and their parents.
And for these reasons and so many more, we have learned to be creative to avoid certain situation. We adapt. But sometimes, in my head and heart, I whine, cry, and feel sorry that I have to deal with bouncy houses, trampolines, and a whole host of things I think insurance agents and emergency room doctors cringe at.
I have also learned to never automatically exclude someone based on my own perceptions. And I think others should try to do the same.
Logan will never know he was not invited because of his hemophilia this time but how do I look my child in the eyes when he is old enough to know he wasn’t invited? What do I tell him? How do I encourage him? My prayer is that it won’t happen, but I realize that is unlikely. What is more likely is that he will learn, earlier than necessary, that life can hurt.
I pray that I raise him to be strong in his weakness but that his sweet personality continues as he ages and we do not exclude others, no matter what we think or see.
Emily Boyer lives with her husband, Geoff, and 4-year-old son, Logan, and infant son, Ryan, in Minnesota.