Keys to the Kingdom

Over the last several years, I have been focused on the idea of transition and independence as Thomas speeds through his adolescence. While he will always be my little boy, I simply have to face the facts that this six-foot, 16-year-old will be making decisions for himself and his healthcare in short order.
There have been several major transitions for us over the last several months. In the months leading up to Thomas’s sixteenth birthday, I admittedly had a very hard time handing over the car keys so he could practice driving. He was (rightfully) frustrated with me and (rightfully) arguing that he was a good driver. I was a nervous mess every time he got behind the wheel, and while probably not as equally frustrated, I was, nonetheless, pretty frustrated with myself. I recognized he was a good driver – why was I putting up roadblocks? While nervous when his older sister went through the same phase, I did not restrict her driving practice, so I asked myself, “Am I unconsciously worried about hemophilia? Am I playing the ‘what-if’ game in my head?” I convinced myself that it wasn’t that, but still, I couldn’t shake the anxiety every time Thomas got behind the wheel. 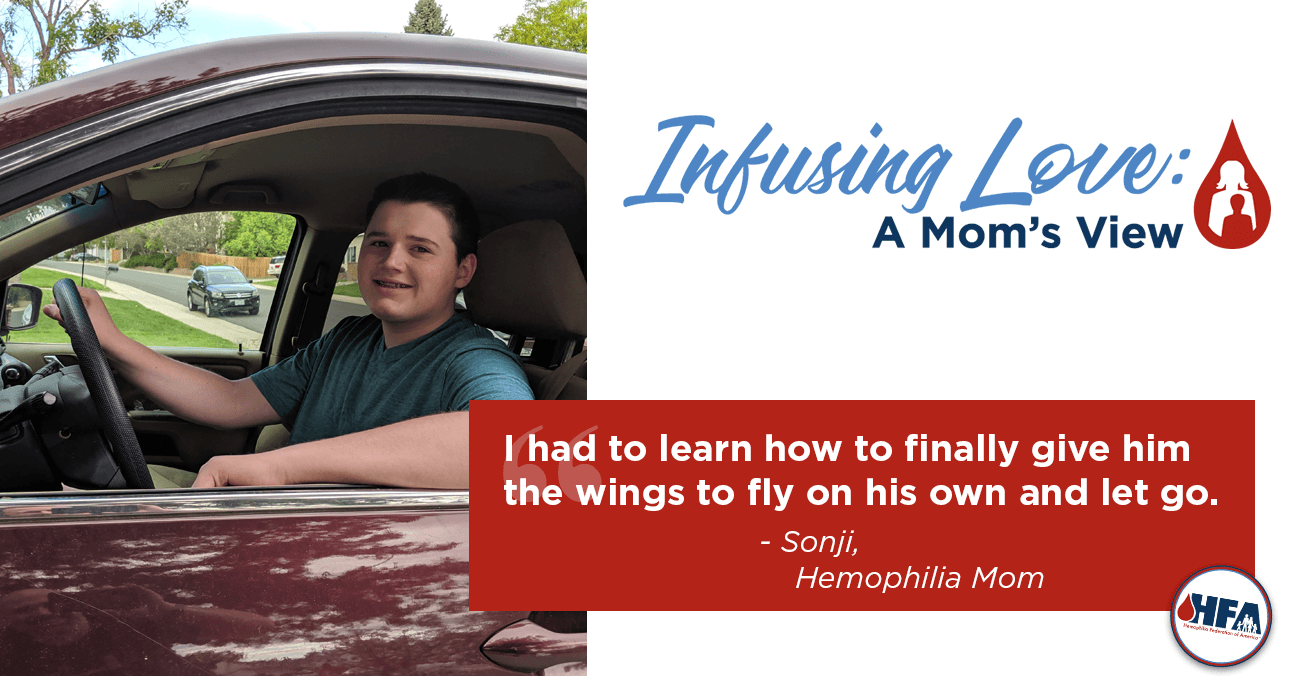 Even with all my worry, Thomas successfully got his practice hours in and passed his driver’s examination on his birthday. Over the course of the next week, he started driving himself to school every day and to downtown Denver during afternoon rush hour twice a week. It was during that week that I finally realized what all that anxiety was based on: For the first time in Thomas’s life, he had true independence. He literally had the keys to the kingdom. He was out there, driving on whatever journey he was on, and he did not have me or his dad as his co-pilot. I had to learn how to finally give him the wings to fly on his own and let go. And let’s face it: letting go is not easy.
Once I realized all this, the anxiety lessened a bit, because I felt comfortable knowing that we had given Thomas a solid foundation for navigating not only the roadways, but also his overall life. He is a great kid with a great head on his shoulders.
In actuality, Thomas has been involved in decision-making for many years. From the time my husband and I felt that Thomas had a good grasp on his disorder, we sought his input into treatment decisions. Our treatment center has done a good job of involving Thomas, not only when speaking to him about possible research studies, but directly talking to him, instead of at him, during clinical visits. It’s an important distinction when working with teens, and I appreciate that our providers recognize the difference.
Several weeks after his birthday, Thomas led the way through his annual comprehensive clinic visit. He asked good questions, participated fully, and honestly, I don’t think he really needed me there. It was bittersweet.
Thomas has been following the recent safety and recall issues that have happened in our community. While I wish those problems had never happened, it is good to see him being vigilant about his care. He signed himself up for the Patient Notification System and asked to be added to HFA’s email distribution list so he could directly hear, instead of relying on me to pass any news along.
What I have learned is that transitioning to adulthood is not a one-way street. Often, we focus on how to help the teen, but we also have to recognize that move is a huge change for the parents too. Once I recognized that we had provided Thomas with a good roadmap, I could let go of control and enjoy my own newfound independence – because letting go gave me a lot more bandwidth to focus on me.

Sonji lives with her husband, Nathan, and three teenagers, Nora, Thomas, & Natalie, in Colorado.
*Note: “Infusing Love: A Mom’s View,” is a blog collection of personal opinions and a representation of individuals experiences. While extensive efforts are made to ensure accuracy of the content, the blog entries do not represent HFA or its Board of Directors. The blog is also not intended to be construed as medical advice or the official opinion/position of HFA, its staff, or its Board of Directors. Readers are strongly encouraged to discuss their own medical treatment with their healthcare providers.