Advocacy used to scare the devil out of me.
I avoided anything that had to do with going to my state capitol or writing a letter to a legislator.Â  Advocacy sounded like downright torture and I didn’t want any part of it.
A perspective change came in the late fall of 2005. My husband called from work and told me that in his employer’s health insurance open enrollment meeting, he had been informed the new plan would include a one million dollar lifetime cap, an extraordinarily expensive deductible, and an outrageous out of-pocket-cost.Â  At the time I was pregnant with our third child and Thomas was 2 years old and in the midst of terrible, frequent bleeding, and inhibitor complications.Â  I drove to Nathan’s office to talk with him and instead ended up sitting in the mini-van for hours as the kids napped and I cried. 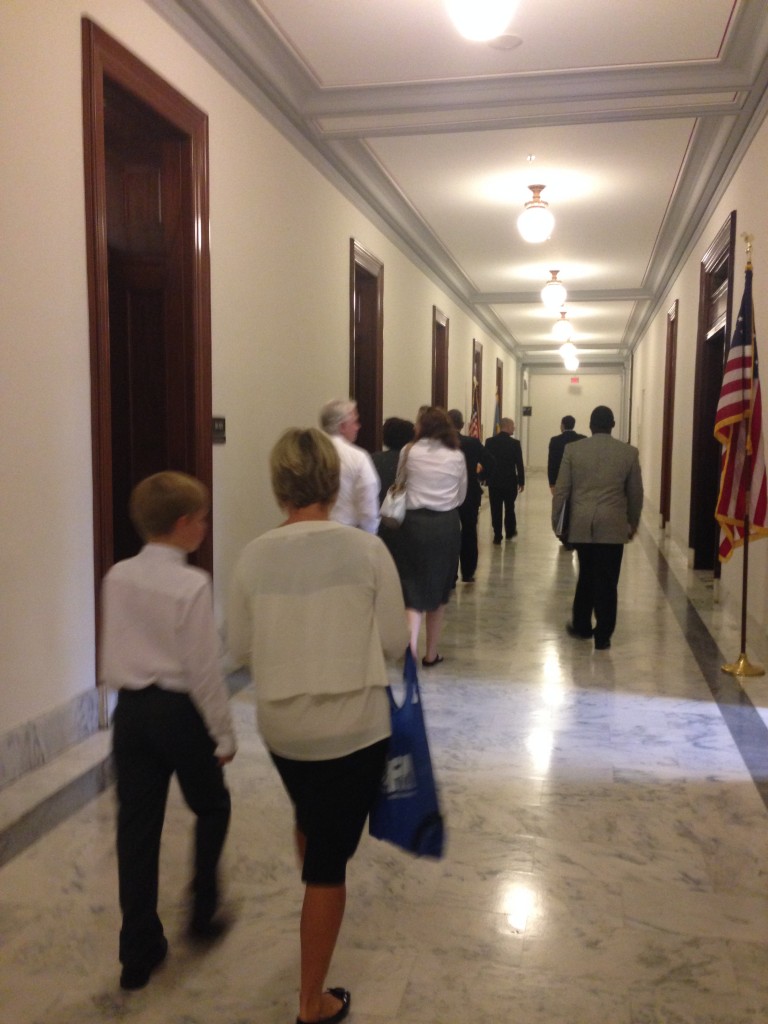 But then I got angry.Â  I was angry because when Thomas had been diagnosed with hemophilia, I had been assured that he could have a perfectly normal life as long as he had access to factor.Â  That assurance was now in danger due to a less than acceptable insurance plan.Â  At first I was angry with my husband’s employer because I was convinced they didn’t want to cover the costs of Thomas’s care. As I did my research, though, it became apparent they were being forced into this new insurance plan and didn’t like it anymore than I did.Â  I scoured research and journal articles to show why hemophilia is such an expensive disorder to treat and gathered all my own record-keeping and logs to prove that we weren’t being wasteful in how we used factor.Â  I wanted to show the insurance company why it was so vitally important that Thomas have access to his medication – and that access also meant affordability.Â  It absolutely enraged me that my toddler had the world at his feet, but that bureaucracy and profits were being put ahead of his potential for a full, healthy life.
Over the next few years, my husband and I became very vocal about our situation.Â  We spoke to various bleeding disorder organizations, HTCs, and other health advocacy groups.Â  We used our anger and fear about this limitation of access to care to make a positive change.
By 2008, my husband found he really liked this advocacy stuff and decided to run for a seat as a State Senator in Colorado.Â  Ultimately, he lost the race, but we learned so much and met so many people along the way.Â  In the process, I learned that advocacy really wasn’t this scary beast – it’s simply talking to people about what you are passionate about.Â  I’m passionate about my kids and their well-being, so advocacy turned out not to be so hard after all.
Across the United States in the summer of 2009 town hall meetings with U.S. Representatives and Senators took place as President Obama began introducing his plan to overhaul healthcare.Â  Nathan and I watched with bated breath, hopeful that some positive change would happen for the hemophilia community.
We never dreamed we’d get a phone call at 10 PM on a Friday evening, asking Nathan to share our story and introduce the President at a Town Hall meeting in Grand Junction, Colorado the next day.
We had no hesitation.Â  A staff member had called earlier in the week, but after Nathan openly spoke to the White House representative, frankly disagreeing with parts of the President’s and Congressional proposals, we got the impression that they would ask someone else.Â  But, another call came and a different person spoke to Nathan about our insurance struggles.Â  Nathan paced the floor as he recounted maxing out two one million dollar insurance plans before Thomas was even 4 years old.Â  He told the staffer how we had skipped doses of factor – in the midst of bleeds – hopeful that we could save just a little bit of our cap, but that the bleed always worsened and we ended up having to use more factor.Â  He told of us being advised to get a divorce so that as an unemployed, stay-at-home mother with custody of the children, I could qualify for Medicaid coverage for the kids.Â  At 5 AM the next day, a higher level staffer called, asking more questions.Â  Finally, the head of the health care reform efforts for the White House called and spoke to Nathan. Meanwhile, as Nathan chatted with them, I was throwing supplies and clothes in the car, trying to explain to three young children that they were maybe, possibly getting ready to meet the leader of the free world.Â  You know, just a normal Saturday afternoon.
With just seven hours to go before the speech, it was confirmed that Nathan would be sharing our story and introducing the President of the United States.Â  We frantically drove across the Rocky Mountains of Colorado, knowing we had a duty to our hemophilia family to make the most of this opportunity. It wasn’t glamorous – we changed into our Sunday best in a Burger King bathroom just down the road from the high school where the President was to speak and swung into the parking lot with just minutes to spare before the Town Hall was to begin.
In four short years, I had gone from evading advocacy to watching President Obama fist bump my beautiful child with hemophilia and having him thank me and my family for sharing our story. Â It was completely surreal. 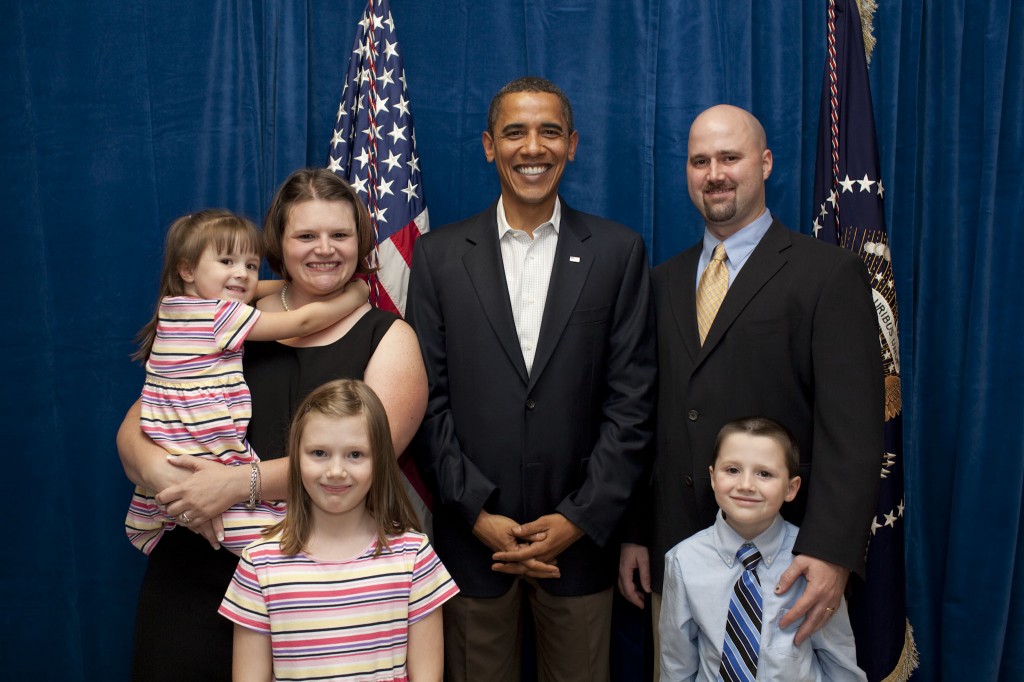 A week later, the White House called again and asked to film aÂ videoÂ about our healthcare nightmare at our home.Â  We spent an entire Saturday sharing our story with a video crew.Â  The video ultimately was featured on the White House’s webpage and, three years later, the video crew came back for anÂ updateÂ as we celebrated the Supreme Court’s decision to uphold the Affordable Care Act.Â  Nathan and Thomas have visited the White House on a few occasions and President Obama has referred to our family and hemophilia on a number of instances.Â Â Â  Those opportunities arose because Nathan and I simply would tell anyone who would listen about our precious little boy and the life he deserved to live.
Advocacy is your truth.Â  Sure, as we meet with legislators we need to go in prepared with facts and data, but the best lead is to tell your story.Â  Be honest and be real; make whatever issue you are advocating for personal. Offer solutions.
Moms love to talk about what’s important to them; at the top of that list are our children.Â  That’s simply all advocacy is.Â  Talking about and taking action. That work continues today as community members from the bleeding disorders are on Capitol Hill to meet with Congressional staff and legislators. It reminds of why I now love advocacy work: because it’s a chance to brag about my wonderful children and make this world a better place for them to live.
Sonji, her husband Nathan, and three children:Â Â Nora (12), Thomas (10), and Natalie (8), currently reside in Colorado.
_________________________________
*Note: “Infusing Love: A Mom’s View,” is a blog collection of personal opinions and a representation of individuals experiences. While extensive efforts are made to ensure accuracy of the content, the blog entries do not represent HFA or its Board of Directors. The blog is also not intended to be construed as medical advice or the official opinion/position of HFA, its staff, or its Board of Directors. Readers are strongly encouraged to discuss their own medical treatment with their healthcare providers.