There are many dates and events in our lives that we think of as markers: birthdays, anniversaries, graduations, and holidays. For some it’s buying their first car or even a home. Sometimes they are things like the death of a loved one or loss of a job. We have memorabilia such as pictures, diplomas, obituaries and newspaper clippings saved away.
As a hemophilia mom I’ve found some of my markers are related to my son’s bleeding disorder. I remember the first time I was able to treat him without any help, the first time he did his own treatment, the first time he went into his HTC visit alone, and the time he started ordering his own supplies. I have learned that I’m not the only one who has pictures of bruises, bloody faces, and surgical scars. In my basement there are old casts, crutches and braces that are too small. There are canes, slings, and more than a few sharps containers of various sizes around our home.
Throughout my son’s life, I never thought I would have any issues with a bleeding disorder, I was always told that I was “just a carrier.” From time to time, I heard about women with low factor levels, and the differences between carrier status and having mild hemophilia. Like most women in my situation, I thought it was normal to be constantly bruised and to have horrible, heavy periods. Once I was diagnosed with mild hemophilia, there were a couple of life events that finally made sense. When I had my teeth pulled at sixteen years old, I bled for almost three weeks at the site of extraction. And during an emergency surgery I had when I was eighteen I nearly bled out. Finally, there was a reason! 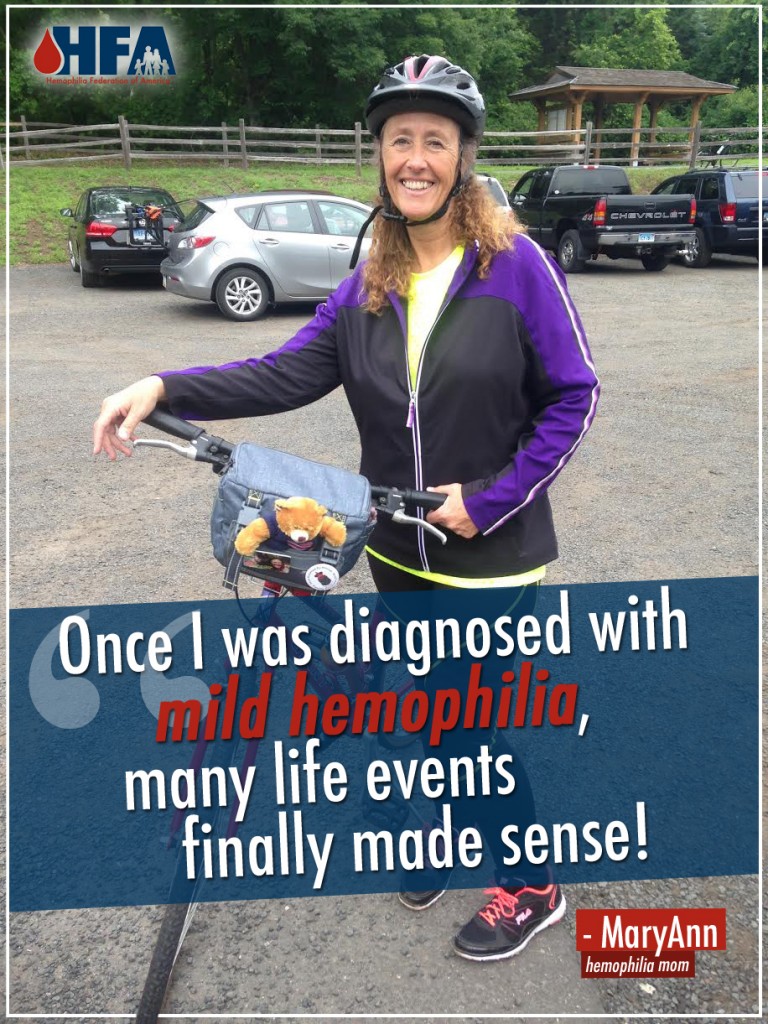 Just over a year ago I had a brain bleed that landed me in the neurology intensive care unit at Dartmouth Hitchcock Medical Center in New Hampshire. Suddenly things became very real. Â I was forced to sit up and take notice. Maybe there really is something to this mild hemophilia thing!
I had to stop doing things I love until they were sure it was healed: I missed almost a whole summer of sea kayaking and my doctors advised me not to ride in the Gears for Good bike ride. I could take walks as long as I didn’t get overheated. I couldn’t get overtired and, of course, I was warned not to bump my head. But I gained a lot as well; I received support, love, and empathy from so many people. I discovered that Max is a very supportive son who will tell me when it’s time to slow down, and take a nap when he thinks I needed one. One of the unexpected things I got was awareness that low factor levels in women can be very dangerous.
One of my favorite phrases is “making new memories.” In the course of a lifetime, things happen; sometimes they are the most amazing things and I don’t want them to end, and then there are other times where I can’t wait for a certain moment in time to be over. I ended up in the hospital on Memorial Day last year instead of at work. This year I was at work as scheduled. I made a new memory. Last year, I had to skip riding for Gears for Good, but this year I was able to participate in the bike ride. I certainly wasn’t the fastest and there were a few times I didn’t think I would make it. But I did. I made a new memory.
I am once again grateful for a community that is informed enough and courageous enough to fight for what is right for us. It’s hard as parent of a child with extra needs but if we don’t take care of ourselves, we can’t be there for them. If someone asks about having mild hemophilia, don’t discredit them. There are many resources in this community that we can refer them to. If you have questions or concerns, please ask and find the answers you are looking for. Don’t do what I did and assume that it’s “normal” because it may not be. Haven’t we been taught to fight for our kids? It’s important to fight for ourselves too – because there are many new memories to be made.
Maryann and her 23-year-old son, Max, live in New Hampshire.