For the past four years I have been participating in Hemophilia of South Carolina’s legislative days. During this annual event, I meet with our local representatives to share my experience of raising a child with a bleeding disorder and why it is important to support state programs that support our community. In prior years, I have taken my oldest son or daughter, but this year they were too busy with school priorities to miss a day. I thought my six-year-old twins weren’t mature enough for legislative days; I assumed the information learned at the workshop would be too advanced for them and it would be too long of a meeting with our representatives. Even as I left for the workshop, I felt regret for not taking at least one of my four children because I want them all to know how important being an advocate is. Not only does advocacy apply to the bleeding disorders community, but to life in general because you have to know how to advocate for what you want and need. Actually, they advocate every day to me for what they want — they just need to learn how to apply those skills to important issues!
This year advocacy day was a bit more exciting because when March was designated National Bleeding Disorder Awareness Month to be more inclusive of all bleeding disorders and everyone was taking the Red Tie Challenge.Â  Our Executive Director, Sue Martin, was challenging everyone in our chapter to take the Red Tie Challenge and purchased red ties for us to encourage our Representatives to take the challenge with our bleeding disorder community. Janel Johnson-Momanyi, a program manager for HFA, facilitated a program with the kids on how to advocate. It was a great legislative days experience and I really missed not having my family with me.
I did share the experience with my family when I came home. I brought them home a red tie as well, so they could take the Red Tie Challenge. I explained to my kids what the challenge was and that March was now National Bleeding Disorder Month. I talked briefly with my youngest son, Laithan that I was going to email his kindergarten teacher to see if his class could do something for National Bleeding Disorder Month.
A week later I received an email from Laithan’s teacher telling parents, “Tomorrow we will celebrate hemophilia week.Â  Please have your students wear red to show support!”Â  I was absolutely touched that his teacher would want to acknowledge “hemophilia week.”Â  I sent his teacher a quick email back thanking and explained that I had promised Laithan that I would be in touch with her because it was Bleeding Disorder month and he wanted to make red ties for the class. 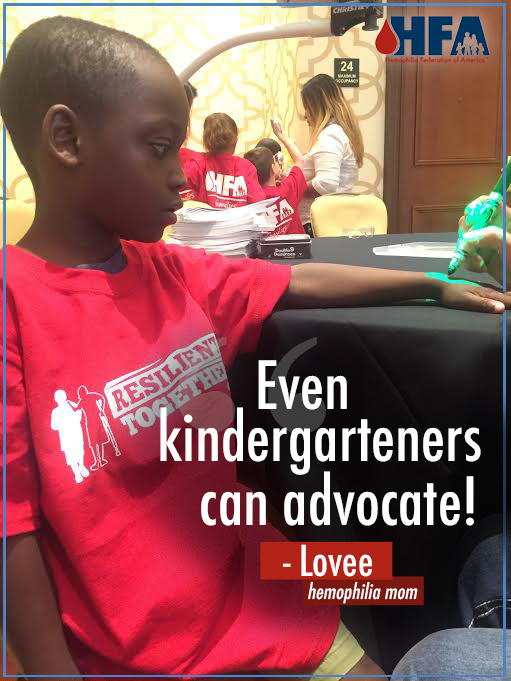 To my surprise, when Laithan got off the school bus that afternoon he was wearing his red tie! I asked him, “What are you doing with your tie!?” He said, “I stuck it in my book bag this morning,” smiling.Â  Â Then I realized he may be the reason for his teacher’s email! After a few emails with his teacher, I learned that Laithan had told her that he was wearing his tie because tomorrow was Big Red Day for hemophilia week. She sent me a picture of his class wearing red and since they didn’t have ties they held up Twizzlers! Laithan was standing in the middle with a huge smile!
I was so proud of Laithan!Â  He didn’t wait for me to send an email to his teacher, but went to school and advocated for himself and had a whole day planned around it!Â  I realized then that he would have been more than ready for Legislative Day and definitely will be going with me next year!Â  It goes to show you can never be too young to be an advocate!Â  Laithan will have to wear his tie again for World Hemophilia Day on April 17th.
A few weeks later my family was blessed to go to the Hemophilia Federation of America Family Symposium in Vegas. As Cazandra wrote in last week’s blog, the theme of the Symposium this year was “Together We are Resilient” and it was a family reunion! One of the sessions I attended was, “Grow Up, Stand Up: Kids As Self-Advocates,” where several panel members shared their own family stories and experiences to encourage the next generation of bleeding disorder advocates.
As I listened to the panel share their stories, I reflected on my own family experience and I realized that I have raised resilient self-advocates! My sons don’t like being stuck with a needle to take their factor, but they do it and deal with it. When they tell people they have hemophilia and explain what a bleeding disorder is they don’t moan about it, they simply state the facts and explain what they do to make sure hemophilia does not control their life. I am sure Laithan has proudly showed his friends in class his port and explained to them how he takes his medicine. I can guarantee he left out the part that he begs his twin sister Layla to hold his hand! That is okay though, I am proud by the fact that he doesn’t feel he has to hide his bleeding disorder from anyone. Laithan will definitely be part of the next generation of bleeding disorder advocates.
Whether it was the Red Tie Challenge or updating your profile picture to HFA’s Bleeding Disorders Awareness Ribbon, our resilient community really came together this year to raise awareness. It was incredible, inspiring, and gives my family hope for the future.
Lovee’ lives in South Carolina with her husband, Charles, and her children, MaRee’ (16), Marques (13), Laithan, and Layla (5).