The candidates for the HFA Board of Directors Executive Committee were asked to record a short video to share rather than a written resume this year. I thought it was a great idea until I realized that I had to do it too.Â  I totally dragged my feet for a few weeks until I reached the due date, and had to make myself sit down and do it.Â  I came up with what I thought was a cute idea to play on the “I Love Someone Rare”, as you can see in the beginning of my video.Â  I had Nick record it with me but really had no idea what I was going to say after that.
https://youtu.be/wrRz6_qNnwU
When I said in the video that we had a not so good day, it was because what I didn’t expect to happen was that after we taped the clip, Nick looked at me and said “I hate hemophilia.”Â  Doing my best to control my tears, I asked him why.Â  He told me that because of hemophilia he didn’t feel like he could live his life to the fullest.Â  So I asked him what he felt like he was missing out on because of his hemophilia.Â  But I knew what the answer was going to be.Â  I am the minority in a house of boys and therefore we talk about sports – a lot.Â  And for those of you with boys that love sports – a word that boys love and mothers hate — is football.Â  My son REALLY wants to play football.Â  I tried explaining to him that even if he didn’t have hemophilia, it wasn’t a guarantee that I’d let him play.Â  But that doesn’t matter.Â  For both of us, it really is the principle of the thing.
He wants to play football, partly just because he’s a boy, but mostly because he wants to be like every other boy he knows.Â  But what he didn’t know was that deep down – I want him to play too.Â  I really don’t want him to play – but as a mother, I hate telling him he can’t do something.Â  I want his life to be full of unlimited opportunities – just like he does.
During the course of the conversation, which happened to take place about an hour before he was to play in a basketball game, he said to me “Momma, do you know why I go out there and play as hard as I can?Â  I don’t want anybody to think I’m any different than anybody else.”
I explained to him that hemophilia doesn’t define him.Â  But hemophilia has certainly made him into who he is today.Â  It’s made him be the boy that plays basketball so hard it sometimes makes me a little tiny bit nervous.Â  And it’s made him be the boy that won’t tell his baseball coach (who just happens to be his Dad,) that his nose is bleeding because he’ll make him come out of the game.Â  It’s made him into a boy that I’m extremely proud of.
When I ran for President of the HFA Board of Directors last year, I was nervous.Â  I had big shoes to fill.Â  When I joined the Board of Directors in 2006, it was under the direction of Carl Weixler, followed by Chad Stevens, Paul Brayshaw, and then Matthew Compton.Â  Each had their own individual strengths that they brought to the organization, the role of President and each of them taught me something different.
The one thing they all have in common is that they’re Blood Brothers.Â  Which means that they’re obviously all men.Â  I am not a Blood Brother and obviously not a man.Â  I am a woman, but more importantly I’m a mother of a little boy with severe hemophilia.
In 2014, when I ran for President, honestly, I worried that being a mother wasn’t enough to make me qualified for the role of President.Â  Thinking about the list of Past Presidents that I was fortunate enough to serve under and look back at the Past Presidents before them even, I saw Blood Brothers who were strong leaderÂ s and strong policy advocates.Â  All things that I either didn’t have or rather didn’t think I had. 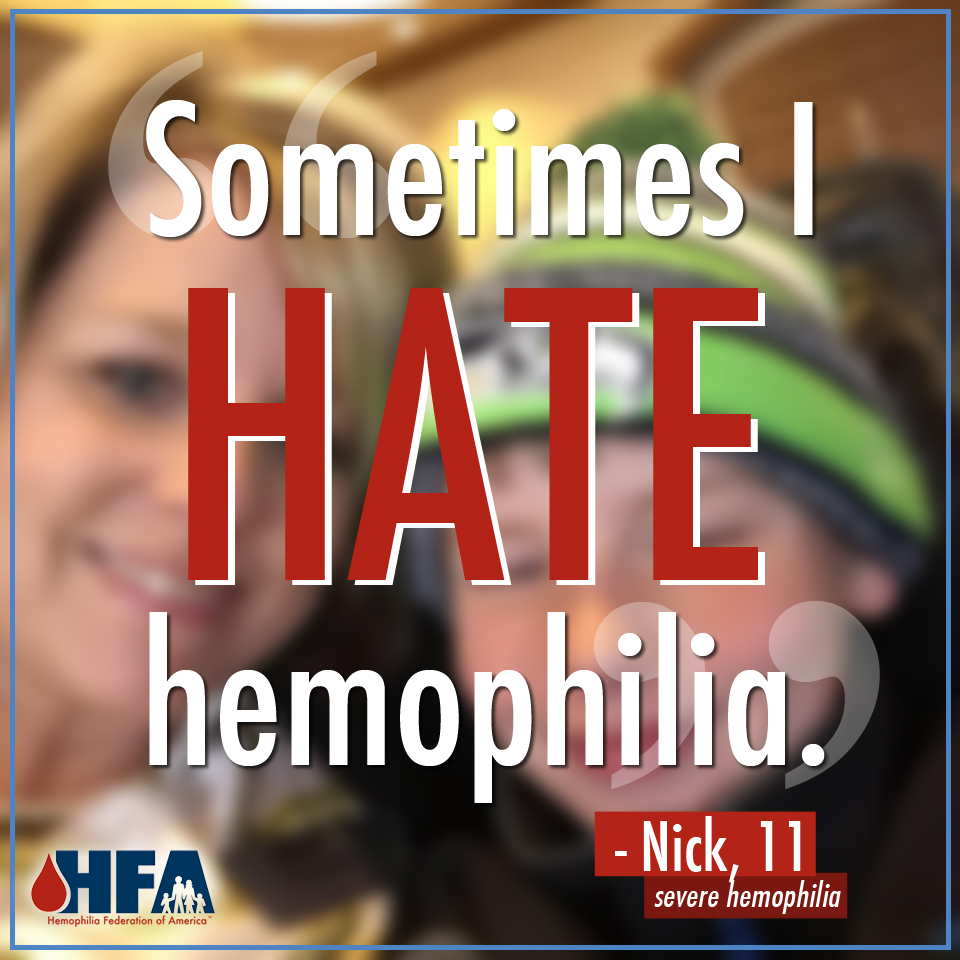 How many times as mothers have we said or heard other mothers say “I’m just a Mom?”Â  I’m guilty of it too.Â  But I ask all of the mothers i to never say that again.Â  The words “just” and “mom” never go in a sentence together anymore.Â  There’s no such thing as “just a mom.”Â  I could list all the things that go into being “just a mom,” but we’d never make it to any sessions.
I had a conversation with HFA’s Legal Counsel, Donnie Akers, a couple of weeks ago.Â  I told him that in my adult life, after I got married, I cared about one thing.Â  The one thing that mattered the most to me – the one thing that I cared about doing the most – was being a good mother.Â  Everything else pales in comparison to that.
When I was elected President, it changed.Â  Because after being a good mother, I wanted to be a good President for this organization.Â  And I wanted to do so because I was a mother.Â  I want my son, when he’s an adult and perhaps has children of his own, to look back and say “My mother did that because of me and for me.”Â  And I want to make him proud.
Since we are at the end of March – and into the time of year that is commonly known as March Madness.Â  I thought it might be appropriate to reference a quote by my favorite college basketball coach, the late Dean Smith, former coach of the UNC Tarheels.Â  He once said: “The most important thing in good leadership is truly caring.”
So while I will never be a blood brother, and I may question my strong leadership skills or strong policy skills, one thing I will never question is how much I care.Â  I care more than words could ever express for that sweet little boy sitting at the front table.Â  And I care about every one of his blood brothers and blood sisters in this room.Â  And I think that gives me a very unique job qualification.
One of my favorite cartoons is the one seen here “Be careful what you say to me.Â  My Momma’s crazy and I’m not afraid to tell on you.”Â  I prefer to say that I’m passionate, but…
Since it is March Madness, I’ll throw out another appropriate Dean Smith quote “There is a point in every contest where sitting on the sidelines is not an option.”
I think that time is now.Â  And what better place to start, than today?
Be Involved, Ask questions, Take Action.
Be Involved.Â  Whether this is your first Symposium or you’re a regular, you’ve taken the step to Be Involved.Â  The next step is stay involved.Â  Make connections this weekend and stay connected after you go back home.Â  If you’re not a member of HFA, I highly encourage you to do that this weekend.Â  Take back the valuable information you receive to your member organization. Stay engaged.
If you’re here but you’re not quite sure what to do while you’re here or after you leave – Ask Questions.Â  There is a wealth of information sitting in this room and all throughout the Exhibit Hall. I encourage you to take advantage of it.Â  There has been tremendous growth and change when it comes to the treatment of hemophilia.Â  It can quite often be confusing and somewhat overwhelming.Â  So, ask questions.
And perhaps the most important thing – Take Action.Â  Sometimes I think we may tend to question our ability to really bring about change.Â  When I said to Ask Questions – How can my one voice bring about any change – was not one of the questions to ask!Â  I like to refer to the bleeding disorder community as small, but strong.Â  If your voice was added to all of the voices in this room, the possibilities are endless.
Tracy, her husband Lance and son Nick (11 years old) live in Virginia.
___________________________________________
*Note: “Infusing Love: A Mom’s View,” is a blog collection of personal opinions and a representation of individuals experiences. While extensive efforts are made to ensure accuracy of the content, the blog entries do not represent HFA or its Board of Directors. The blog is also not intended to be construed as medical advice or the official opinion/position of HFA, its staff, or its Board of Directors. Readers are strongly encouraged to discuss their own medical treatment with their healthcare providers.Â