Infusing Love: Not What I Had Planned

I like control. I like order. I like a plan. I like lists. Not in an overly aggressive way, but in a way that makes me feel calm. If I can plan for it, I can feel in control of it.
Hemophilia does not work this way. Hemophilia and all the moving parts involved with hemophilia love to wreck the plan, or just take complete control. We try to plan but hemophilia has other plans for us. This has been our family story since the word ‘hemophilia’ entered our daily vocabulary. And it is exhausting. Exhausting to the very core of who I am.
I have come to terms with preparing for all the what ifs that might be thrown our way, but I cannot help but wish that hemophilia would just go according to plan – the simple way, the easy way. You know, when we are not rushing but rather able to make thoughtful and well-reasoned decisions. Right now we are trying to do just that. We are trying to make well-reasoned decisions with a plan in place. But I cannot help but look over my shoulder expecting something to go wrong. 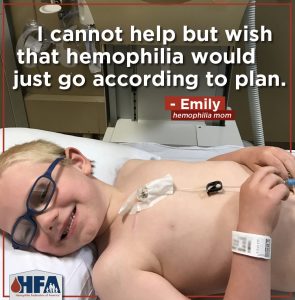 Logan just turned 6 years old. His first month of life was spent in the NICU from a massive brain bleed, which was immediately followed by getting a broviac catheter placed, which was followed by a dreaded inhibitor diagnosis. The broviac was replaced with emergency surgery for a port, that port needed a port revision, and all the while we battled a persistent inhibitor and the daily challenges of a severe bleeding disorder. Those things are behind us. We beat the inhibitor and I had begun to feel like we were on bleeding disorder autopilot, and that we could relax without having to handle any big challenges for at least a few years. Unfortunately, like always, hemophilia decided that it needed to shake things up.
My son’s port is not working properly. We have tried all the port tricks and we have undergone a dye study, but the results fall in that mysterious category of “we do not know what the problem is.” In my mind I started to plan for a new port placement surgery. I knew my husband was taking some time off this summer so I thought the timing would be perfect. The time is already scheduled. It is summer time so we didn’t have to worry about missing school. I thought I had this.
Until I didn’t. Until his hematologist said that they would not replace the failing port but that they wanted us to move to peripheral arm pokes. They knew we were ready…that Logan was ready. He had all the good indicators.
I was stopped in my tracks. Now I needed to start preparing to not only learn how to do this, but I would have to get my 6-year-old to do this. So we have planned and we have practiced. It is just awful. I knew this day would come. I was not naÃ¯ve to the realities, but this seemed too soon and at one of the worst possible times with a newborn at home and while we are selling and buying a new home.
Having the plan be disrupted in my head is one thing. I have learned to make quick moves and change the plan, but this is awful. As I sit and hold him while he says no and fights and we plead and beg and tears roll down his cheeks, I have those flashbacks to the days where we had to change his broviac dressing and it took four adults to hold him to keep the field sterile. Or holding him to have his port accessed. The tears were hot and the pain was evident.
I am not ready to do this. To fight this battle yet. To change the plan. I always knew it was coming, one day, but today seems too soon, too unexpected. And I know that a year from now or two years from now, the port will be a distant memory and the peripheral sticks will be normal, but right now I am tired. I am tired from the planning and the pain. I am tired that hemophilia feels like it gets to take center stage and disrupt my plans. But because I like a plan, you better believe that we have a well-reasoned plan to make peripheral sticks a reality and you better believe I am looking over my shoulder for what might happen next. Because let’s face it: something always does.

Emily, her husband, Geoff, 6-year-old son, Logan, 3-year-son, Ryan, and infant daughter, Payton, live in Minnesota.
*Note: “Infusing Love: A Mom’s View,” is a blog collection of personal opinions and a representation of individuals experiences. While extensive efforts are made to ensure accuracy of the content, the blog entries do not represent HFA or its Board of Directors. The blog is also not intended to be construed as medical advice or the official opinion/position of HFA, its staff, or its Board of Directors. Readers are strongly encouraged to discuss their own medical treatment with their healthcare providers.