Infusing Love: On The Edge

Two boys who live on opposite sides of the International Date Line met this past May and it was magical.
The two boys, ages 10 and 14, both share a love of Legos, tormenting their siblings, and guzzling root beer. Both boys also have severe Hemophilia A, as well as a long history of high titer inhibitors.Â  Each boy has had multiple ports, been on Immune Tolerance Therapy (ITT), tried immune suppression therapy, and developed target joints at a young age.
The boys, Thomas and Andrew, had never met before.Â  They had only exchanged a few notes and small packages, after a mutual friend online introduced Andrew’s mother, Lynley, and me a few years ago.Â  Lynley and I had bonded instantly over our similar experiences as hemo moms and chatted online almost daily; the boys had connected, but those exchanges were most often tied to one or the other was experiencing a tough time with a bleed or hospitalization. It’s interesting – as moms, we seemed to need that contact with one another more often while Thomas and Andrew were okay just connecting during the really rough stretches.Â  Those short correspondences with Andrew another had certainly lifted Thomas during tough times and it touched me to see him bonding with another boy close to his age who had faced a similar path.Â 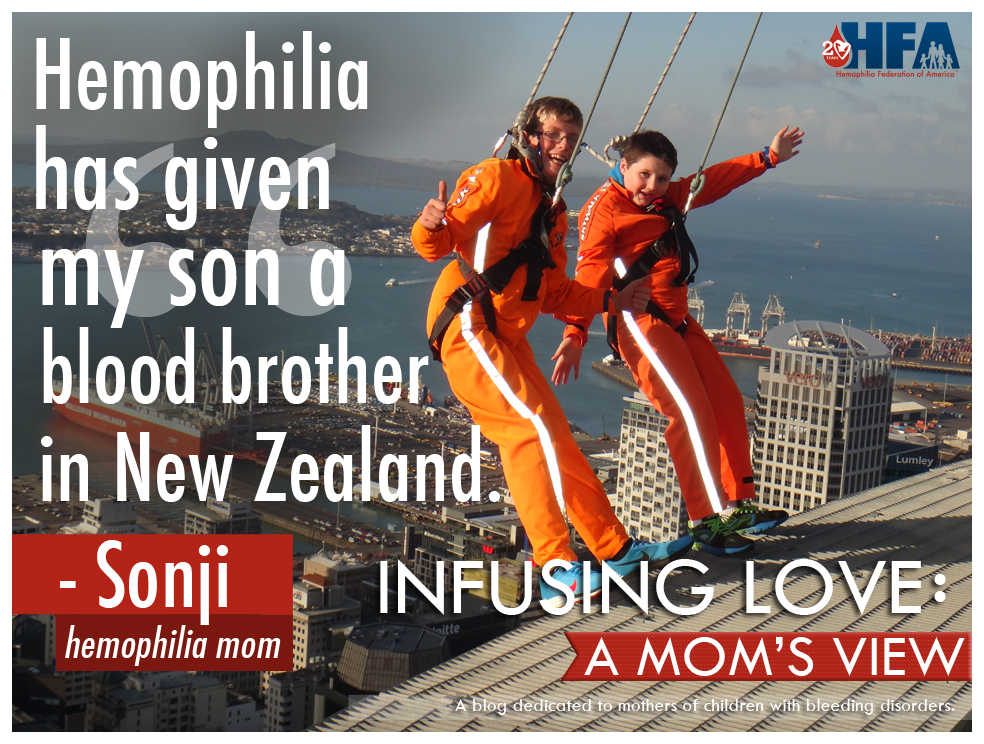 When the World Federation of Hemophilia (WFH) announced that their 2014 World Congress would be held in Melbourne, Australia, Lynley began nudging me to apply for a passport and plan to attend. Â She was going, since Melbourne is fairly close to her home in Auckland, New Zealand. This might finally be our chance to meet in person, she explained.Â  My husband, Nathan, had always dreamed of going to Australia, so we made the decision to pack up the family and attend our very first WFH meeting. Â Attending WFH would take care Lynley and I meeting, but I knew the trip wouldn’t be complete if we didn’t fly over to Auckland after the Congress so that Thomas and Andrew could meet one another too.Â  What happened there was much more than two moms could have hoped for when the seed was first planted that their sons might find a kindred spirit on the other side of the world.
While Lynley and I had known each other for nearly six years, sometimes there is a bit of awkwardness when you meet someone for the first time, and in today’s digital world, you never know if the person you met online will be the same in person. There was none of that when Lynley and I spotted one another in the opening session at WFH.Â  We hugged and giggled (and maybe made a little bit of scene in a room full of people), but the deal was sealed – this was a friendship that was meant to be.Â  Two hemo moms instantly connecting was one thing; how two pre-adolescent boys who had never met each other might react when suddenly face-to-face could play out quite differently.
A few days later, we hopped a plane to Auckland, arriving at Lynley’s house even before she and her husband, Richard, had returned from the World Congress.Â  Andrew was waiting for Thomas when we arrived at their home – and it took mere seconds before the boys had disappeared into Andrew’s room to talk – no introductions, no hesitation, just instant friendship.Â  And did they talk!Â  We stayed with the Scott family over the next few days, and we’d hear the boys laughing and talking late into the night.Â  They compared ITT doses, checked out each other’s crutches and agreed that a certain make and model of tourniquet is the best.Â  They made fun of each other’s accents, but shared an appreciation for Dunkin Donuts.Â 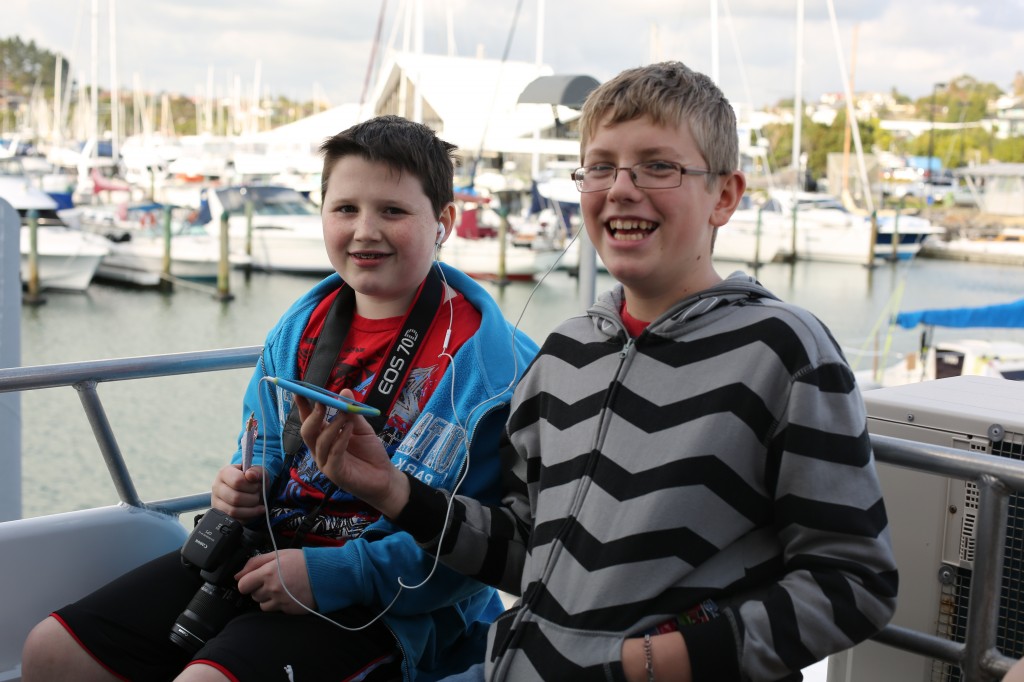 One afternoon we headed into downtown Auckland. The boys were intent on experiencing the Auckland SkyTower’s famous SkyWalk experience – where one wears a harness to walk around on a platform that’s not quite four feet wide and 630 feet up in the air! To say it’s a breathtaking view from below is one thing, but experiencing it high atop the city of Auckland along with Thomas and Andrew will be one of the highlights of my life.
As moms, Lynley and I agreed that far too often we have to say “no” to our boys with hemophilia and inhibitors.Â  We constantly live on the edge of the next bleed. But on this day, we said, “Yes, you can.”Â  It was meant to be for Thomas and Andrew to share this experience together: to step out onto that pergola and then, literally, step out and over the edge.Â  I was a nervous wreck standing behind them on that platform – when it was my turn to lean over the edge, I couldn’t do it initially.Â  But these boys who have faced so many challenges and trials, stepped out without hesitation.Â  I’d like to think that they were able to face such height, such challenge, such risk because Thomas and Andrew are resilient, courageous boys because of all the adversity they have faced. I’m not sure if either could have handled it on their own, but they owned that experience and they did it together, because while they are strong, brave boys, they are even stronger together.
Thomas and Andrew will always have hemophilia.Â  They will always have that experience high above Auckland.Â  And they will always have each other as the Lego-loving, root beer guzzling, risk-taking blood brothers from the opposite side of the International Date Line that they are.
_________________________
Sonji lives with her husband, Nathan, and three children Nora (12), Thomas, (10), & Natalie (8) in Colorado.
*Note: “Infusing Love: A Mom’s View,” is a blog collection of personal opinions and a representation of individuals experiences. While extensive efforts are made to ensure accuracy of the content, the blog entries do not represent HFA or its Board of Directors. The blog is also not intended to be construed as medical advice or the official opinion/position of HFA, its staff, or its Board of Directors. Readers are strongly encouraged to discuss their own medical treatment with their healthcare providers.