Does anyone really like getting stuck with needles?Â  I don’t and I only gets labs drawn yearly and have my flu shot once a year.Â  When you have hemophilia and you have serious needle phobia, infusions don’t go well.Â  My son Chris, who is now 30, admits he still has severe needle phobia.
Chris’s first bleed happened when he was three months old as a result of an immunization.Â  I remember being at the hospital where the Hemophilia Treatment Center (HTC) was located.Â  The nurses held Chris down and the doctor did the infusion.Â  Chris cried and I sobbed.Â  How were we going to cope with this?Â  I couldn’t imagine what our lives were going to look like at that point in time.Â Â  How often were we going to be in an ER?Â  And how often were we going to have to put Chris through infusions?
We were very fortunate Chris didn’t have other bleeds as a toddler.Â  He was six years old before his bleeds started on a routine basis.Â  Chris usually wouldn’t tell us he had a bleed until the arm or leg was really painful and swollen, or we would see him limping or not using an arm.Â  Or if he did tell us, it was after HTC hours, a weekend, or a holiday.
Chris wouldn’t always cooperate with the nurses during infusions.Â  Sometimes there was a lot crying, by both of us, but for the most part he did well.Â  After a few years of spending more time at the HTC or ER, I decided it was time for me to learn to infuse.Â  Chris still hated needles, and usual infusions would take ten to twenty minutes, depending how many times he would pull his arm away, or walk away from the table.Â  The anxiety was awful for both of us.Â  When I would miss, I would feel guilty.Â  I gave Â myself two tries, then it would be off to the HTC or ER for help.Â  This is how things went for the next few years. 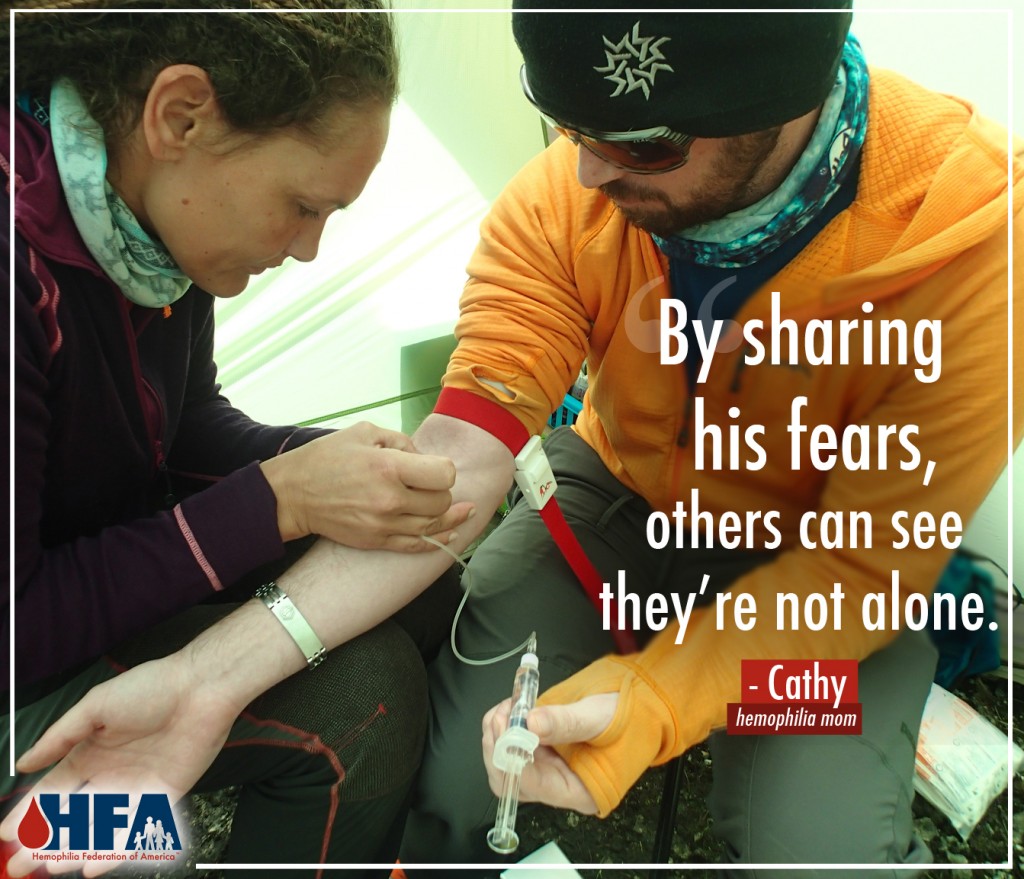 Then around age twelve, some of the infusions started taking even longer.Â  Chris would hesitate, he kept pulling his arm away, the tears would flow, and the arguments would start.Â  Instead of ten minutes, infusions would take an hour or more.Â  One would think as kids get older, infusions would become easier.Â  But by the time Chris was fourteen, most infusion sessions were horrible. We would fight, cry, yell, and by the time the infusion was done we both felt terrible.Â  Sometimes we still had to go the HTC or ER for help.Â  I had so much guilt for Chris having to endure these infusions.Â  I hated to see him in such physical and emotional pain.Â  For the first time he voiced his hatred for hemophilia, and my patience was at its end.
At that point Chris was playing more competitive baseball and he had a decision to make.Â  Did he want to continue with baseball or quit because of bleeds and hating infusions? Â He chose baseball.Â  Since Chris chose to play baseball, the HTC nurse said it was time he needed to take ownership of his hemophilia.Â  Chris needed to learn to self-infuse and also prophylactically treat due to the amount of injuries he was having. Chris sat for two hours with the HTC nurse before he was able to infuse that first time.Â  It was not easy for him, and still isn’t today.
Somehow Chris endured all the injuries, numerous infusions, the anxiety, and continued playing baseball.Â  Not all of his infusions were successful, and we still needed occasional trips to the ER or HTC.Â  He would still sit for long periods of time to even get up the nerve to infuse, but now the ball was in Chris’s court — I couldn’t make him infuse.Â  The arguments and yelling decreased.Â  He knew what needed to be done to play ball, and he did what he needed to.
Reading back through the infusion logs we kept, I was surprised how many infusions required more than one stick.Â  Some took three, four or even more sticks.Â  Ports were discussed several times due to Chris’s infusion difficulties, but they were not conducive with the level of baseball Chris was playing.
When high school was over, Chris wanted to continue playing baseball in college.Â  He chose a school out of state.Â  How was he going to manage his hemophilia? Â My husband and I had a lot concerns, but we met with the school nurse, members of the local ER, and several others at the school.Â  A lot of education was done with everyone involved.Â  His school nurse became our eyes and ears. She was amazing, and became part of “the family.”Â  There were times Chris was in so much pain from a bleed, he couldn’t do his infusions.Â  His nurse would do them for him, at her home or his apartment, at 9:00Â at night if necessary.Â  It was a little easier for me to sleep knowing Chris was in good hands.
After college, Chris met Jess, who he married last year.Â  She is a wonderful young woman who wanted to learn about hemophilia, and she learned to do his infusions shortly after they started dating.Â  Chris will still sit for twenty minutes or more to infuse, but Jess is so supportive.Â  She has been helping him overcome his fears, and will help with infusions whenever needed.
When he is in the middle of a mountain climb in the middle of nowhere, he can stick himself with no issues. Â On all of Chris’s climbs he had at least one other person who could infuse for him if needed.Â  He taught his uncle how to infuse when he climbed Mt. Kilimanjaro.Â  An HTC nurse taught one of his guides how to infuse before he went to climb other summits.Â  Chris also taught a new friend he met on his climbs to infuse.Â  When Chris is under pressure, somehow he can overcome his phobia of needles and get the infusion done.
Chris has been able to share his needle phobia with younger kids at HTC camps over the last couple of years.Â  He has told these kids he hates needles, and hates infusions.Â  But if he wants to continue doing the things he enjoys, he has to infuse.Â  He even let some of the kids practice their sticks on him.Â  How he’s been able to do this, I don’t know.
I am so impressed with kids today who can do their own infusions at such a young age.Â  But I am so proud of Chris.Â  He has endured a lot with his needle phobia, but didn’t give in to it.Â  By sharing his fears with others he hopes it may help them to see that they are not alone.
To learn more about easing infusion anxiety and making pokes easier for everyone, HFA has several resources available: