The reality is this: my Benny is not self-infusing yet. He is 12 and while he participates fully in the preparation of his infusions, the “poke” is this huge mountain he doesn’t feel prepared to climb yet.Â  I’ll access a vein, hand him the syringe to push his factor and even walk away as he finishes up, but he is simply terrified of poking himself.Â  It befuddles me because Benny is so personally driven with a need to be in control of things in virtually every other area of his life.
I disclose to my bleeding disorder family, that I am a bit envious of other mothers with kids infusing themselves at age eight.Â  Pardon my proud momma moment, but my kiddo is super smart and the logical part of my brain doesn’t get why he is not there too!Â  He skipped a whole grade in math, can build a Lego with 1,000 pieces in a few hours and, fearlessly, is just one belt away from a black belt in Taekwondo.Â  He’s had quite a few bleeds over the years and handles them quite stoically.Â  Putting a needle through his own skin though, is terrifying.Â  I’m not living in his body so I don’t know how much is physical versus psychological, but the pain and anxiety are real for him and vastly different from when I insert the needle to when he does.Â 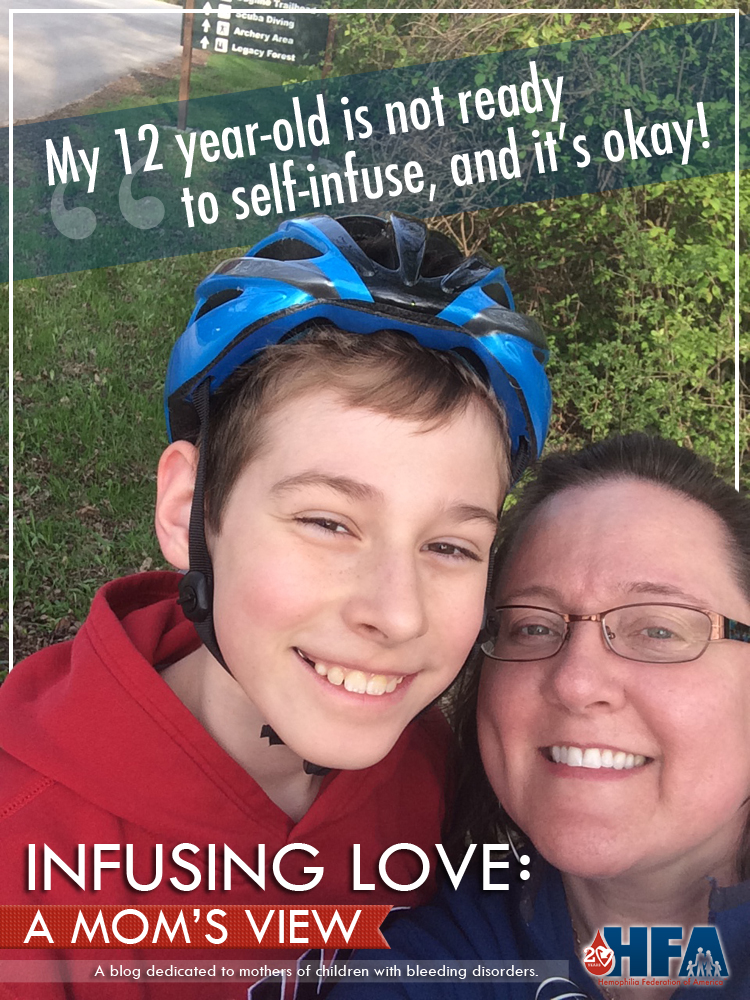 We thought camp would do the trick. Isn’t learning to infuse and gaining independence what hemophilia camp is all about?Â  Every year we go to pick him up from camp and sit in the audience as they overview the week and recognize every child who has achieved self-infusion success.Â  It’s a beautiful thing to watch and each year I’m filled with hope that this will be the year Benny gets his Big Stick Award!Â  And then, each year they get to the end of the list and… not yet.Â  This year the nurse at camp pulled me aside at pick up and told me Ben tried and tried, to the point of tears because he wanted so much to self-infuse…because his mom had told him he needed to start.Â  He didn’t want to disappoint his mom.
Oh yes, I did tell him that. I own it and place full guilt right on my shoulders where it belongs.Â  I’ve thought about it a great deal. I’ve known for years that Benny marches to his own drum and we’ve strongly encouraged him to be himself and not just follow the norm to fit in. So why am I so fixated on him fitting this norm and being like other kids who infuse at age 8 or 9?Â  How much of this is about me wanting it? I travel a fair bit and he relies on me completely for his infusions so I do have to actively plan and manage how he gets infusions when I’m gone.Â  Is this really all about my wanting an escape from that responsibility and pressure to always be the one?
The honest answer is yes, but not all.Â  I also see my future vision of Benny with a big grin and a confident posture as he successfully pokes himself and then gets up and goes on with his day, in total control of himself.Â  My husband and I are not in that vision at all.Â  It is all about him and the freedom and independence we want so much for him as a person.Â  It’s our dream though, not his…yet. His pain and anxiety are the priorities to reality check with.
Soon after camp this year, HFA hosted a webinar on pain.Â  I’d suggest watching it to any mom having a similar situation to ours.Â  It was filled with thoughtful ideas and approaches and gave us a few ideas we had not tried, like creating a pain plan, which we are currently working on.
Since that camp feedback, we have also backed off the pressure on Benny and have been actively focusing on Benny’s need to do this at his own pace. We’ve got six years before he leaves for college. He has time and we will keep trying and encouraging him and get there as a family team!Â  Instead, I think we will shift gears and he can start ordering his own factor. That’s building some independence without poke pain worry!Â  It is all a work in progress, right?
Kimberly lives in Wisconsin with her husband, Howard, and boys Ben (12) and Johnny (9).

To view the HFA Families webinar, Tackling Pain & Anxiety: Parents as Coaches for Coping, click on the title.Â  A pediatric nurse pain specialist and child life therapist from C.S. Mott Children’s Hospital at the University of Michigan presented a brief explanation on the factors associated with an on-going medical condition such as a bleeding disorder and pain during procedures, such as infusions.Â Â The webinar identified techniques that may help children handle pain and anxiety and discussed how parents can empower their children to voice their concerns and preferences to make infusions and other procedures better tolerated. Watch the webinar to learn tried and true tips to help your family develop a poke plan that works for you and make infusions and other procedures a little less stressful for both patient and parent.Â  Handouts for the webinar can be found here.