With a new diagnosis of hemophilia my world was turned upside down. What’s only been 4 months since Maddox was diagnosed feels like a year or two. I feel like I’ve grown so much in just a few months. I have put my life vest on and jumped right in. While, sometimes I’m afraid of sinking I know I can always reach out to my hemophilia community for questions, concerns, or just a simple hello.
Since I’m new to the hemophilia world I never understood much about infusions. When it was first discussed with us, my husband and I were pretty adamant of no port since we didn’t want little Maddox to have surgery. 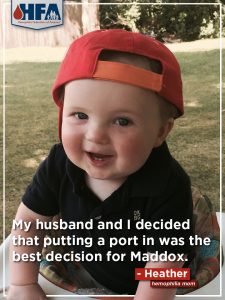 We invested help in nurses and our doctor to come up with a good infusion plan for Maddox. Since he’s practically walking andÂ being a typical boy, we knew it was time to start something. The nurses had been coming out for about a month when a port was openly discussed. Poor Maddox had so much chunk on his body that it was so difficult to find his tiny veins. I know it was only a few visits, but seeing Maddox squirm, cry, and holding him down was torture in itself.

My husband and I decided that putting a port in was the best decision for Maddox and our family. Understandably, the decision is based on everyone’s individual family and preference; and my husband and I realized we had to rethink our original stance of no port.
I asked a few moms who had ports and felt a bit of confusion. What do you mean he’s going to be accessed for a few days? Won’t he roll on the needle and bleed? What do you mean there’s a huge lump? Will it go down, and will you really notice?
All these questions arose until the day I brought Maddox in for surgery. Last Monday Maddox went in for his port. I took pictures of before and after as I always want to document. Maddox is such a happy baby, so it was hard to put him under anesthesia. I didn’t want anything to happen to my baby, but knew this port was for the best.
Maddox came out of surgery in great spirits, and was laughing and flirting with the nurses just an hour later. I uncovered his gown and saw the port and the huber needle. I giggled to myself and said, “Oh, that’s what it means to be accessed.”Â  I watched Maddox get medicine in his port without even squirming. What a sigh of relief after months of peripheral sticks at home.
We were released from the hospital where Maddox was infused for a week at home by nurses. A week after surgery Maddox was infused in the port for the first time. Again, I didn’t realize how much was involved. Sterile was the word of the day. From the gloves the nurse wore, to the medicine that was put on, it all made sense to me. Now I understood what people were talking about.
One infusion down, and a lifetime to go. I felt like this was my first real step into hemophilia with Maddox. Although a port is scary we felt it was beneficial to Maddox’s development and growth. I know each infusion won’t be so easy, but it was nice to know that week one with the port went well.
Maddox is moving and grooving as always. He’s a fun, happy, and energetic 10 month old that loves life. He lights up our world everyday. I’m so happy everything went well with the procedure, and look forward to accessing him myself soon.

Heather lives in Massachusetts with her husband, Shane, and her young sons, Logan and Maddox.
*Note: “Infusing Love: A Mom’s View,” is a blog collection of personal opinions and a representation of individuals experiences. While extensive efforts are made to ensure accuracy of the content, the blog entries do not represent HFA or its Board of Directors. The blog is also not intended to be construed as medical advice or the official opinion/position of HFA, its staff, or its Board of Directors. Readers are strongly encouraged to discuss their own medical treatment with their healthcare providers.