My mother was called a “bleeder” when I was growing up. I remember she almost died from a hemorrhage after surgery and her nose constantly needed to be packed at the emergency room due to nose bleeds. I never bled like her and never considered I might have something too. I went 36 years of my life, even serving in the Army, and two pregnancies without knowing that I was a bleeder.
My daughter is the most significantly impacted and it wasn’t until she was diagnosed that I was too. We are a family of bleeders, but we all bleed differently. I tell people my time in the Army was good training – not just for those first few months without sleep, but also the battle we would have to fight for years to get her properly diagnosed and the care she needed and deserved.
The doctors had been wrong about her due date and she came into the world yelling after 22 hours of labor. I like to think she was yelling at the doctors for taking so long to get her out and for creating a huge hematoma on her head that made her look like one of the coneheads from Saturday Night Live in the ’70s. That cone should have been my first hint that something wasn’t “normal.” 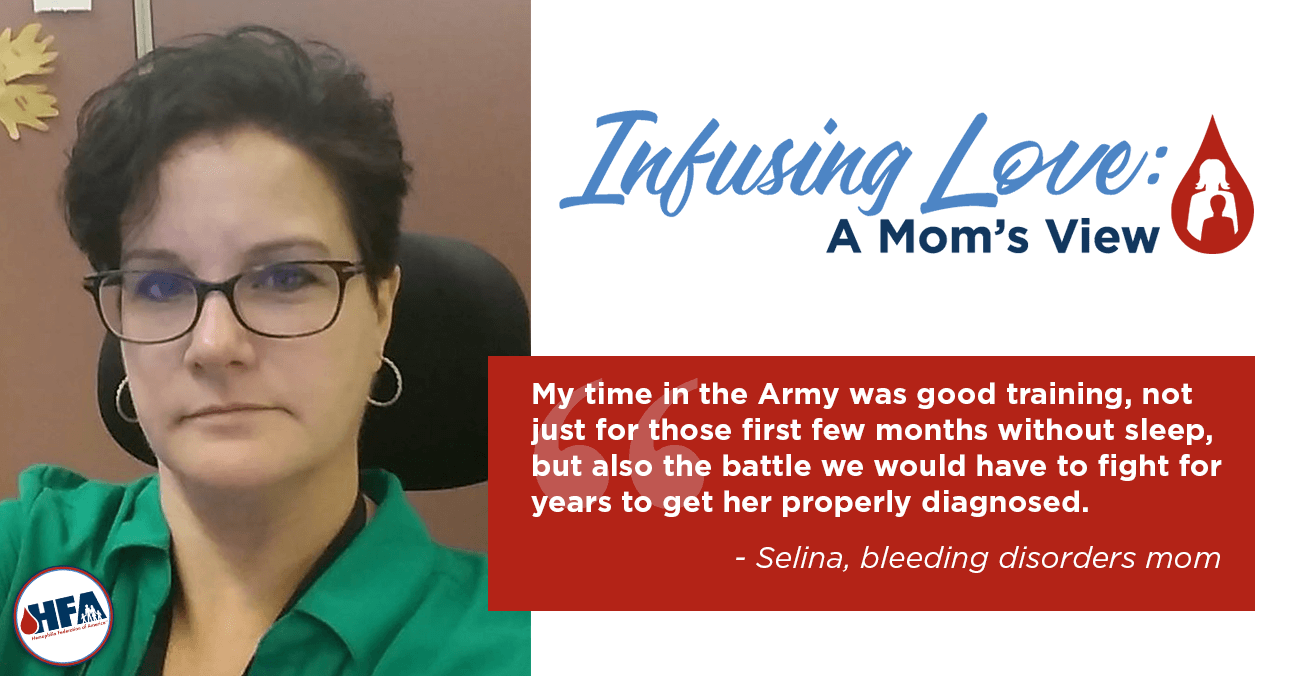 From the time of her first diaper change, her legs looked like a leopard with their spots in various shades of greens, yellows and purples. Throughout elementary and middle school, nose bleeds at school, in the car, while shopping and my ‘favorite’ was the nose bleeds in the middle of the night that woke us up to what looked like a murder scene over her pillows. She always hurt – her back, her feet and her knees ached endlessly.
Puberty arrived and so did up to 60 days of nonstop bleeding. Another hint something was wrong. Her pediatrician said sometimes it takes a while to become regular, but 60 days nonstop was far from regular. In frustration I took her to my gynecologist and described her symptoms.Â  The doctor didn’t even do a standard exam. She looked at me and said, “I think she has von Willebrand’s.” Â We were referred to our local children’s hospital and our bleeding journey began.
Over the next 10 years there would be many bleeds and hospital stays and it was rarely easy. Like the time she received too many doses of DDAVP causing her to retain almost 20 pounds of fluid to the point that stretch marks appeared overnight on her hips, abdomen and legs. Another time she spent five days in the hospital with a gastrointestinal bleed when DDAVP failed again. The doctors were frustrated they could not get the bleeding to stop. Finally, she received factor and the bleeding stopped. I researched the medications she had been on and discovered she was on three that lowered platelet levels and that is what caused her bleeding. Her doctors were humbled by my find and the realization they had not been communicating with each other.
It took 10 years of bleeds, anemia, pain, frustration and sometimes hopelessness to find answers. I questioned doctors and backed up my questions and demands with clinical research documents. She got older and became more involved in the search for answers. She took the lead in pushing for second and third opinions when doctors told her that her bleeding symptoms didn’t match her diagnosis and the medications should have worked. Her hematologist sent her to other blood centers for investigation. Ultimately all they could say was it was something with the von Willebrand gene, but it did not fit the identified types. Her bleeding was exponentially worse than the standard tests predicted, and we spent years in limbo struggling with pills, hormones and little progress. We felt frustrated and often overlooked, but we never gave up, even when we were exhausted and overwhelmed.
It took 10 years of questions, research and downright begging to get more answers. Those answers included a platelet disorder and a diagnosis of Ehlers Danlos. Ehlers Danlos can cause or exacerbate bleeding and my own hematologist told me he considers Ehlers Danlos a bleeding disorder on its own. Validation is a hard-fought reward, but validation was not enough.
Finally, at the age of 21, she was allowed to try a factor product prophylactically, but it produced side effects of fatigue and nausea at its best and at its worst, she had symptoms that made the doctors believe she might have a stroke. Fear, confusion, anger and sadness that something that could have impacted and improved her life so positively turned out to be too risky.
Thankfully, after another year a product arrived on the market that did work and didn’t produce side effects. Her life changed. She grew stronger, healthier and more independent than she had ever been in her life.
“Mom, do you need me to come home? Did the doctor check your levels? Will they be giving you platelets?” These are the questions my child asks me every time I need surgery or get hurt. When I had a hysterectomy, my child stayed in my room with me asking the doctors about my blood work during the night. I suffered a hemorrhage a month later and my child took me to the doctor to make sure I listened and followed his directions. I recently had an arm surgery and my child reminded me of all the things I should not be doing while I healed.
As parents we all know there will come a day when the roles will shift, and our children will become adults and ultimately, we become more like children as we age. We become the ones who will need care and advocacy. My child is an adult now and every time she asks me about my own bleeding I think back to the struggle and the battle we fought to get her the care she needed. My child is so many things – a traveler, a historian, an artist, a writer, a professional and a fighter. That last one is the one I am most proud of because now my child fights not just for herself, but for others with bleeding disorders.

Selina lives in Columbus, Ohio, with her husband Brian and pug Bisquit. She has two adult daughters and a mother who all have bleeding disorders.
*Note: “Infusing Love: A Mom’s View,” is a blog collection of personal opinions and a representation of individuals experiences. While extensive efforts are made to ensure accuracy of the content, the blog entries do not represent HFA or its Board of Directors. The blog is also not intended to be construed as medical advice or the official opinion/position of HFA, its staff, or its Board of Directors. Readers are strongly encouraged to discuss their own medical treatment with their healthcare providers.