When Thomas was much younger, we spent a lot of time in the hospital and as all moms know, keeping a toddler entertained for hours is challenging. I don’t think of him or myself as ancient, but this was pre-tablet days; I would actually haul a portable DVD player and a boxed set of Spiderman DVDs with us for those long days and nights. But even 3 year olds get sick of watching decades-old cartoons over and over.
As we sat for the umpteenth time one day, a knock came at the door. Timidly, a young man walked in and he was carrying an acoustic guitar. He introduced himself as a child life intern who also was a music major and he wondered if Thomas would like to hear some music. I think this poor guy was expecting to play some common nursery rhymes, but my precocious little boy was obsessed with Spiderman and he requested the Spiderman theme song. Thomas may have been sick of watching the cartoons, but he certainly wasn’t bored with the catchy theme song. But this poor fellow standing before us looked to be all of 22 years old and he certainly wasn’t familiar with a cartoon theme song from a late 1960s TV show. He asked Thomas to hum it and he gave it a solid effort at trying to play the song, but ultimately didn’t get it. 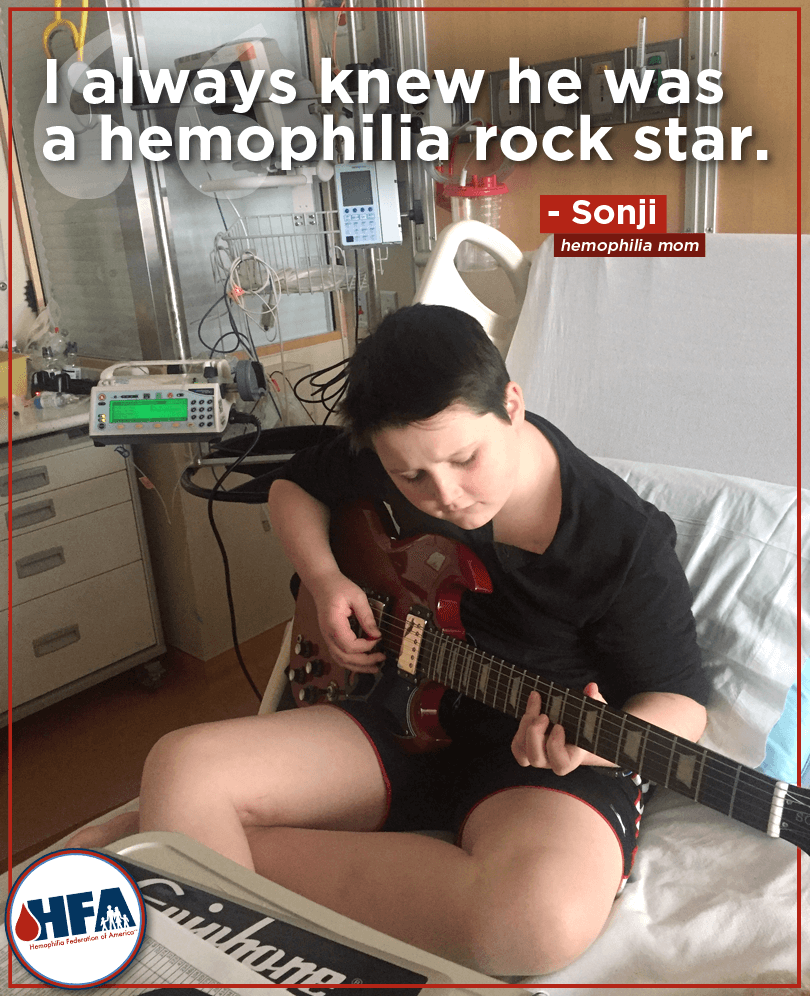 The next day another knock came at the door. The child life intern was back, and this time, he was not so timid. He came in, broadly smiling, and said, “I think I’ve got it.” He proceeded to play the Spiderman theme song over and over with Thomas and even let Thomas pluck out a few notes on his guitar. I’ll kick myself forever for not catching that young man’s name because he may never know how much an impact he made on Thomas.
For years afterward, Thomas begged me to take guitar lessons. And to my great shame, I hesitated. In those years, Thomas’s health was very fragile. We didn’t commit to birthday parties – how on earth could I justify paying for lessons that he’d likely have to miss thanks to the latest bleed? But at Thomas’s 10-year-old comprehensive clinic visit, our physical therapist said something that really stuck with me. She said, “Every kid needs to be a part of a team. We know that Thomas isn’t likely to be on a soccer or baseball team, but a team is just a group of people with a common interest. Find his interest.”Â  I finally relented and enrolled him in a local School of Rock franchise.
At School of Rock, Thomas has access to a weekly private guitar lesson and a Â performance group. Three times a year, he selects a show he wants to be a part of and the group has a weekly three-hour rehearsal. When I enrolled him, I had a conversation with the owner of the school and explained that hemophilia can be incredibly fickle and unpredictable. I worried that Thomas may have a bleed the day of a performance; if he wasn’t able to perform, it could impact the whole group. I needed not be concerned: the older kids in the group would also learn Thomas’s parts and could step in for him if he wasn’t available.
True to form, just as Thomas was cast on his first solo, he landed in the hospital with a nasty leg bleed. This time instead of hauling a DVD player into the hospital, I hauled his electric guitar. We listened to Green Day’s “Holiday” over and over while he listened for his notes. Just like the child life intern all those years ago, within a day, he had taught himself the song.
Five years later, and I’ve watched my little boy turn into a young man on stage. I’ve marveled that he played, and loves, the songs from my middle school years. (I mean, Guns N Roses had some pretty awesome guitar riffs.) He’s rocked out to The Doors, Queen, Prince, Nirvana and countless more rock music artists. His talent has developed tremendously and now if he wants to hear the Spiderman theme song he can pick up the notes and play them for himself.
I always knew he was rock star with how he handled his hemophilia. But he proved to me that’s he’s an actual rock star.

Sonji lives with her husband, Nathan, and three children Nora (17), Thomas, (15), & Natalie (12), in Colorado.
*Note: “Infusing Love: A Mom’s View,” is a blog collection of personal opinions and a representation of individuals experiences. While extensive efforts are made to ensure accuracy of the content, the blog entries do not represent HFA or its Board of Directors. The blog is also not intended to be construed as medical advice or the official opinion/position of HFA, its staff, or its Board of Directors. Readers are strongly encouraged to discuss their own medical treatment with their healthcare providers.