I was recently talking with someone about Chris’s Seven Summit Quest, and the woman I was talking to said something that I didn’t understand. She said she was glad we raised Chris to not be a victim of his hemophilia. I asked her what she meant by that. She said so often people use medical conditions as their excuse for not trying things, even simple things, mostly as a result of fear. Her son has severe asthma, but has become a competitor in Iron Man competitions across the country. That conversation got me me thinking.
I remember that my husband Alan and I decided to not pad the corners of our tables, or the hearth of the fireplace when Chris started learning to walk despite the recommendations of the HTC. We tried our best not to hover. I think we actually hovered more with our older son, Andy, and he didn’t have hemophilia. Whether correct or not, our thoughts were, “Chris has to learn to be able to navigate in the world outside our house, and out there, things aren’t padded.”
With that being said, I am a big time worrier. I tease Chris that I had to start coloring my hair when he was born due to all the gray hair he caused me. As a toddler we were very lucky he didn’t have any bleeds. We would go to the playground and he would head for the highest slide, or climb the highest platforms. He rode his scooter as fast as he could up and down the street. Chris started skiing and playing baseball at age four, and continued to play baseball through college. 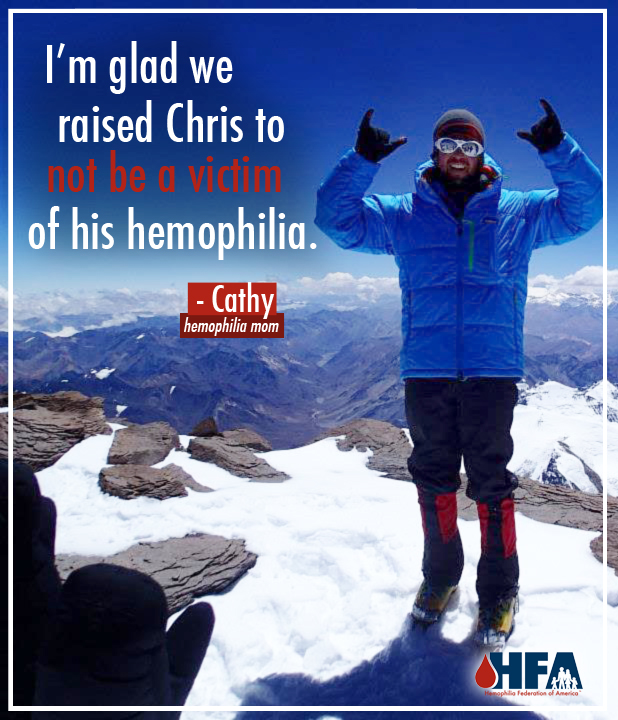 Once Chris did start having bleeds, it still didn’t slow him down. He had to reluctantly sit out of gym class now and then, and miss a ball game once in a blue moon, but he never used hemophilia as an excuse. He did have to learn how to prophylactically self infuse in high school as baseball at that level was causing more bleeds. I would cringe when a ball would hit him, when someone slid into him, or he would slide into a 200 -pound catcher and watch him fall on Chris. Those times were emotionally hard on all of us. We spent hours talking with Chris; he had some awful bleeds, and he hated infusing, but loved baseball. He had a hard choice to make, and he chose baseball despite the infusions and injuries.
After college, Chris took up rock climbing, ice climbing, mountain biking, and has gone parachuting, climbs 14,000-foot mountains (also known as “14er”) in Colorado, and started his Seven Summit Quest. As a mom I understood the consequences of baseball injuries, but the consequences of these new undertakings were very unnerving to me. I questioned him many times: do you really have to do these activities? His answer was yes — they are what he enjoys.
Alan and I have gone to watch him rock climb and felt better afterward. Chris has learned that safety comes first. He has a ritual of safety checks he goes though before each person climbs.Â  We climbed our first 14er with Chris and his wife, Jess, this past summer. Again, safety was Chris’s number one goal. He set a steady pace, made sure we all stopped often for water, and kept an eye on the sky for weather. We made a successful summit and our pride was bursting as Chris was so amazing on the mountain.
Rock climbing and climbing 14ers in Colorado are one thing, and I have seen Chris first hand at these, but climbing the highest mountain on each continent is something completely different.Â  I can honestly say this quest for the seven summits has terrified me. I have spent countless hours, worrying, crying, and I don’t sleep well when he is on these huge mountains. Chris has been fortunate to have some of the best mountain professionals as his guides. But as each climb is getting harder, and are so remote, Alan and I tell him we are so incredibly proud of everything he has already accomplished, he has nothing to prove, and he doesn’t need to continue. But for Chris, he wants to finish this quest.
Unfortunately, Chris has had a setback in his quest.
He was all set to go to Antarctica in December for his sixth summit. Chris called to tell me his permit was denied due to his hemophilia, and he wasn’t going to be able to go. I made the mistake of saying part of me was relieved. I could hear how upset and disappointed he was. After hanging up I started thinking how selfish I was. I let my emotions as a parent get the best of me. Chris had become a victim of hemophilia despite all his training and planning. His dad and I called Chris back later that evening and I apologized for what I had said. I will always worry about Chris, but I will also always support him. Chris has done far more than we ever thought possible; he has never let hemophilia stop him.
He is planning to resubmit a permit request to go to Antarctica next winter, and he knows he will have to do some hemophilia education along the way. Hopefully he will be able to complete his amazing goal, and while I may gain a few more gray hairs, I’ll be offering my full support along the way.
Cathy lives in Colorado with her husband, Alan, and has two adult sons, Andy and Chris. Chris has severe factor IX and is attempting to summit the highest mountains on all seven continents.
_____________________________________________________________________________________
*Note: “Infusing Love: A Mom’s View,” is a blog collection of personal opinions and a representation of individuals experiences. While extensive efforts are made to ensure accuracy of the content, the blog entries do not represent HFA or its Board of Directors. The blog is also not intended to be construed as medical advice or the official opinion/position of HFA, its staff, or its Board of Directors. Readers are strongly encouraged to discuss their own medical treatment with their healthcare providers