Infusing Love: We Are Family

Since my son Thomas was born thirteen years ago, I’ve come to think of the bleeding disorders community as family. Relatively speaking, that feeling came to us very quickly after meeting people in the community. My husband and I jumped right into attending events, volunteering, and generally asking questions of medical providers and anyone else who would listen.
Thinking back upon those early days, we could have hunkered down in the safe cocoon of our home. We could have hidden that Thomas has hemophilia, but for whatever reason, we didn’t and we told anyone who would listen. We reached out to the local and national organizations to learn more about raising a child with a chronic disorder. We attended parenting support groups, and honestly, probably annoyed more than a few people because we were so hyper-focused on being a part of this community.
Luckily, though, we were welcomed with open arms. Mentors including blood brothers, blood sisters, and other moms and dads took us under their wings empowered us with their expertise and knowledge of living with a bleeding disorder. We were given advice ranging from “don’t delay a portrait sitting because he has a hematoma on his head because that’s who he is,” to “send him to camp the first time he’s eligible,” to “remember to take time for yourself and your marriage.” All of these and more became the mantra of those first few years as we navigated the new territory of hemophilia.
As the shock of the diagnosis wore off and we settled in to our new normal, my husband and I learned we were advocates simply because we were parents to a child of a bleeding disorder. Simply put, we didn’t have a choice about being an advocate – it’s just part of having a chronic disorder. For my husband, being an advocate has meant a deep understanding of and love of legislative policy work. For me, it’s meant talking to anyone and everyone who will listen about bleeding disorders and trying my best to be a mentor, a sounding board, and a resource for those parents who are like myself some thirteen years ago.
I wouldn’t be the advocate I am today without the support of organizations like HFA. The resources and support our local and national organizations provide help families day to day in many immeasurable ways, but they also provide things like financial and items support through programs like Helping Hands. 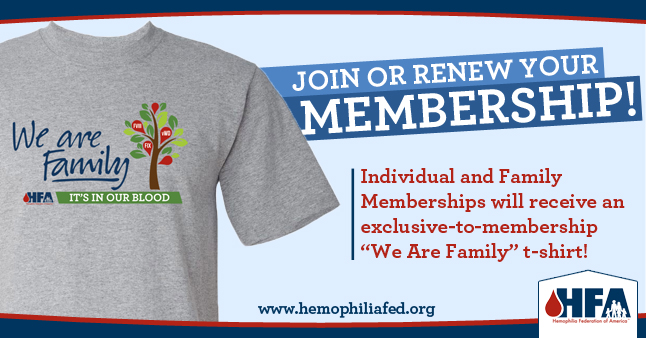 That’s why when it came time for HFA to plan our membership drive for 2017, we chose the theme of “We Are Family: It’s in Our Blood.” We are all in this together, no matter what bleeding disorder may affect us. And we’re all here to support, love, and empower one another. I’m proud to support HFA’s mission through my membership and I’m proud to be a member of the bleeding disorders family.

Sonji lives with her husband, Nathan, and three children Nora (15), Thomas, (13), & Natalie (11), in Colorado.
*Note: “Infusing Love: A Mom’s View,” is a blog collection of personal opinions and a representation of individuals experiences. While extensive efforts are made to ensure accuracy of the content, the blog entries do not represent HFA or its Board of Directors. The blog is also not intended to be construed as medical advice or the official opinion/position of HFA, its staff, or its Board of Directors. Readers are strongly encouraged to discuss their own medical treatment with their healthcare providers.