Do you know those moments when you think, “all is right in our lives today?” We have had a few of those moments recently. We had a horribly tough year in 2016. It just seemed that whichever way we looked, something rough was happening to us or our extended family members. 2017 has been a bit brighter. We have had more times where we can take a deep breath and know that everything is ok. Just as you do that, though, hemophilia comes bearing down to remind you that it is totally unpredictable.
Nicholas is 7 years old. He is my summer baby. He loves the beach, swimming in the pool, catching lightening bugs… he loves everything about summer, including summer camps! He has spent the last three summers going to a local outdoor education day camp for a week. The location sits right on the Severn River and is absolutely stunning to see. He gets to go canoeing, hiking, seining, and gets to swim every day he’s there. He learns about nature and how to protect our earth.
He first attended this camp when he was 4 years old. To say I was nervous about sending him is an understatement. I knew he would be in good hands because there was a nurse on staff and I had the opportunity to chat with her before sending him. She was a bit nervous but was open and 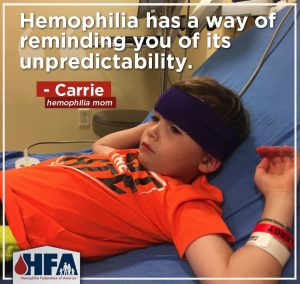 understanding. I sent a medicine kit with him, just in case of a problem. The first year came and went. He didn’t have a single issue. The second year came and went. We had the same nurse, I had the same conversation with her before his week of camp rolled around and again, not a single issue arose. Naturally, going into the third year, I was totally relaxed. By now I knew the staff, nurse, and even some of the kids he would be with. Well, just as I took that deep breath and was thrilled that all was right in our lives, here it came.
It was a beautiful Wednesday afternoon. I had just sat down to dine on a delicious peanut butter and jelly sandwich when the phone rang. I could tell by the number that it was someone from camp. It was the camp nurse; Nicholas had gotten up close and personal with a bathroom door. He had a gash above his eye. It needed stitches or glue and was bleeding pretty heavily. I took a deep breath, realized that my day has just been turned upside down, packed my sandwich up, and headed to camp to get him.
While driving, I was processing on how best to tackle this little issue. It was lunchtime, so the pediatrician’s phones were off. I would prefer to talk to them before heading to any sort of physician to assess his injury. Then came the question as to whether I should contact the HTC. Their ER is a bit further and can be a bit challenging. The local ER was closer and can be very accommodating to kids with bleeding disorders. Ironically, the local ER had just been in the news; it had recently been announced that our insurance would soon no longer be accepted there. Since we almost always go to the HTC with Nicholas, it really hadn’t even registered on my radar; we would be fine if this local hospital was no longer an in-network provider. I guess Nicholas really just wanted to visit there/check them out before the current contract between the hospital and insurance carrier expired! When I arrived at camp and got to the nurse’s office, his gash had stopped bleeding. The nurse had rinsed out his shirt and had him change his clothes. We both agreed that he needed to get some sort of glue or stitches to close it up. It was superficial and no longer bleeding, so heading to the HTC didn’t seem necessary. It wasn’t a huge gash but it was pretty deep and in a tough spot. By the time we got to the car, the pediatrician’s phones were back on. I called and asked the triage nurse for advice. She mentioned that our pediatrician could do stitches but of course he was on vacation! She recommended the local hospital since the bleeding had stopped.
When we arrived, my nerves set in. I felt like I had immediately made the wrong decision. We should have gone to the ER located at the HTC, even if it was further away. I imagined that we would be at this hospital for hours on end with them afraid to treat him and pictured us heading to the HTC anyways. Fortunately, that wasn’t our experience. They called and discussed his injury with the HTC and glued him up quickly. We were on the road home in less than 4 hours, which to me, was very impressive.
Nicholas was a trooper. He was totally relaxed and remained still while they glued it. He was in good spirits, joking around with the nurses and doctors. He even requested a purple bandage, just to irritate his dad who is a die-hard Pittsburgh Steelers fan and wants nothing to do with anything purple or associated with the Baltimore Ravens. We stopped for a milkshake on the way home as a reward. This stressful day was a reminder of how quickly being a parent can turn your day upside down. Hemophilia didn’t cause Nicholas to meet a door square in the eye but it did make things a bit more difficult. Fortunately, we recovered, took our deep breath, and Nicholas is back to being a Steelers fan!
Carrie lives with her husband Mark, and son, Nicholas, and daughter, Aleesia, in Maryland.
*Note: “Infusing Love: A Mom’s View,” is a blog collection of personal opinions and a representation of individuals experiences. While extensive efforts are made to ensure accuracy of the content, the blog entries do not represent HFA or its Board of Directors. The blog is also not intended to be construed as medical advice or the official opinion/position of HFA, its staff, or its Board of Directors. Readers are strongly encouraged to discuss their own medical treatment with their healthcare providers.