Infusing Love: Where Did The Time Go?

I looked at Thomas a couple of weeks ago and wondered, “What happened to my little boy and when did he become a tween?”
It seems like it was just yesterday that I received the diagnosis of his severe hemophilia. The memories are still fresh in my mind of those first bleeds and infusions, and the diagnosis of an inhibitor all within the first few months of his infancy. When I look back on the photos of his toddler years, I see what I call the “perma-bruise” on his forehead and think of it lovingly, not with disdain. It perfectly depicts what life was like for us during those years.
His early childhood pictures remind me that he’s always been a mischievous little guy with cowlick in his bangs that he works to his advantage. I have photos of him attempting self-infusion intermixed with family vacations, swim meets, and performing electric guitar. I have images, both in my mind and stored on my computer, of this darling little boy growing and transitioning into a young man. Sometimes it feels like those images are whizzing by me on this fast-paced rollercoaster called motherhood. 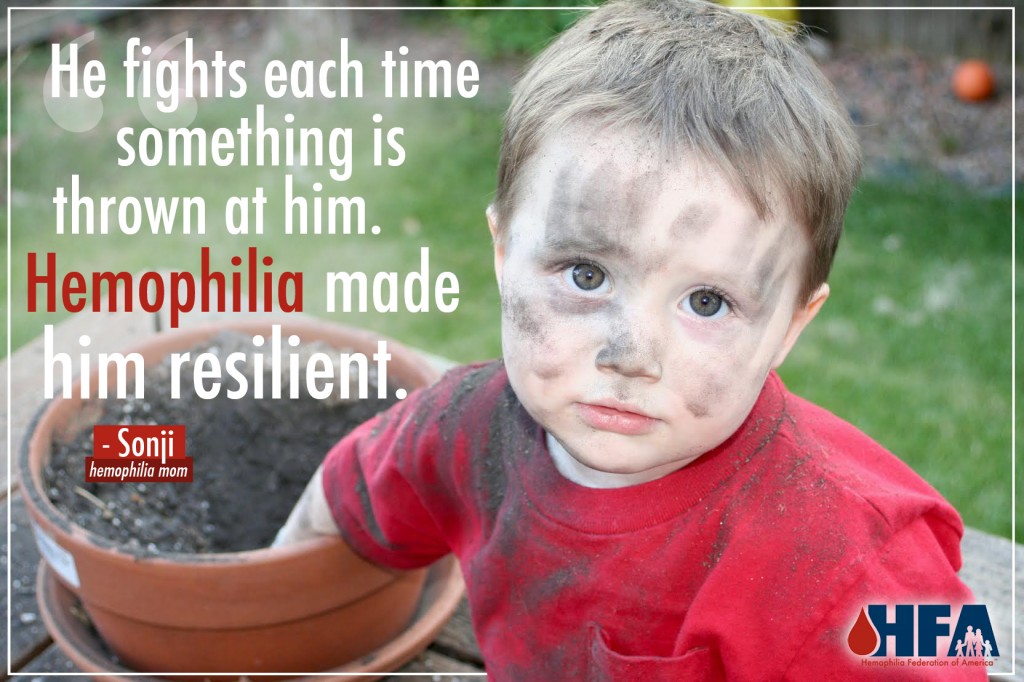 People often ask me if hemophilia gets easier as a child matures. I’m honestly not sure how to answer that question. I can’t say with any real certainty if bleeds decrease in frequency or intensity, because the only thing I know for sure is that you can’t predict one. It’s much like an impending hurricane – you know you are going to feel the effects, but you don’t know how minor or major those effects are going to be. All the stuff that comes with bleeds, from rearranging plans to actual infusions doesn’t necessarily get easier, but we are certainly more skilled at handling those situations now. So maybe the answer is that hemophilia has not become easier, but just more routine.
With each new developmental stage of Thomas’ life, or any child, come new challenges and opportunities. With puberty looming, I recently told my husband that, “It wasn’t Thomas’s factor deficiency that worries me – it’s his deficiency of everyday logic that concerns me most.” But I know that we’ve done everything we can to give Thomas the skills and upbringing to make good decisions as he enters his teen years and faces new challenges at school, both academically and socially. I know that our next comprehensive clinic visit is going to look a little different since at age 12 he’s eligible for more clinical trial opportunities. I also know I will have to take a step back and let him play a larger role in the discussions we have with his providers. Letting go isn’t as easy as we’d like it to be.
My darling, mischievous, spiky-haired little boy is still there, but now he is a sneaky, sarcastic, hair-product induced spiky-haired 12-year-old. It’s bittersweet to see him growing and maturing so quickly, but the one constant over the years is how resilient he is in the shadow of hemophilia. Whatever hemophilia has thrown at him, he’s fought back. He’s grown not only physically, but also mentally and socially. That growth has happened so incredibly fast. Yes, I wish I could slow down time sometimes. Ultimately, I can’t argue with the path we are on to adulthood; I couldn’t be any prouder of who the person Thomas is growing up to be.
_________________________
Sonji lives with her husband, Nathan, and three children Nora (13), Thomas, (12), & Natalie (9), in Colorado.
*Note: “Infusing Love: A Mom’s View,” is a blog collection of personal opinions and a representation of individuals experiences. While extensive efforts are made to ensure accuracy of the content, the blog entries do not represent HFA or its Board of Directors. The blog is also not intended to be construed as medical advice or the official opinion/position of HFA, its staff, or its Board of Directors. Readers are strongly encouraged to discuss their own medical treatment with their healthcare providers.