Infusing Love: You Can Do Anything (with Guidance)

It is important for individuals with a bleeding disorder to find a form of physical activity that they enjoy. When muscles are used during exercise it helps to keep them flexible and strong.Â  Physical activity also helps individuals to maintain a healthy weight, which keeps less stress off the joints, and has even proven to reduce the number of bleeds a person may experience.
It is important for individuals with hemophilia, von Willebrand Disease (vWD), or other types of bleeding disorders to find the right form of activity for their type, severity, and body.Â  Individuals and families shouldÂ alwaysÂ talk with their doctors or physical therapists to help determine whatÂ types of physical activity might be acceptable.Â  Most often, the type of physical activity depends on the severity of the hemophilia and treatment options available.

Â You may not always get the response you want to hear, but occasionally, the answer might surprise you. The below blog from one of our Infusing Love bloggers is an example of that.Â

_____________________________________________________________________
Our family is very active. My husband enjoys weight lifting and will compete in a local Strongman competition this summer. I enjoy lifting weights, Pilates, and running. Our eldest daughter has played basketball, volleyball, cheered, and ran cross-country. Our middle daughter followed in her older sister’s footsteps and hit the competitive leagues and elite sports club circuit. So it makes sense that our son, Jackson, plays sports and is active too. Of course, with hemophilia we have to be a little more selective in sport choices.
At five years old, Jackson participated in a Lil’ Dribblers basketball league; it kept him moving during the cold winter months and he learned some fundamental basketball skills. Although, his favorite thing to do was racing the other team down the court; he looked like he was on a track field instead of a basketball court! My husband and I talked about football from the moment we knew we were having a son. We wrestled with the notion of letting him play, but the growing concussion rate each year made us reconsider. 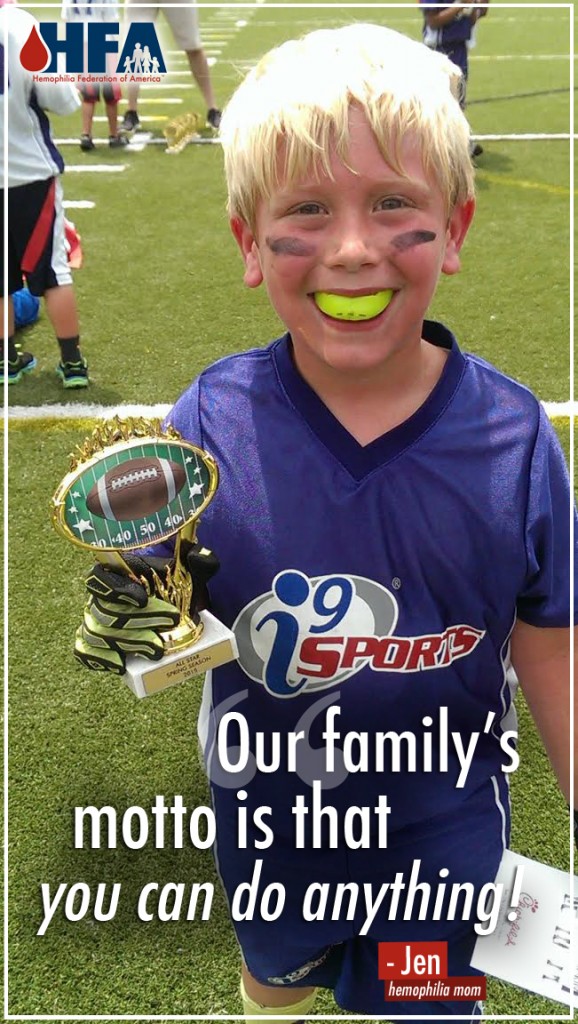 After the hemophilia diagnosis, we thought he would never play, but it was tough seeing his friends and classmates all geared up for football practice at school. Â Jackson would look at them and ask if he could play. It broke our hearts and our family motto of “you can do anything.” How could we preach this to all our kids and exclude him?
The school football season ended, but school recess was the time these boys talked, tossed, and played football. A light switch clicked on: Jackson became obsessed. He asked for NFL trading cards. He studied players, positions, and teams. The NFL network was constantly on at our house; Jackson would watch games from, as he likes to say, “back then.” He would watch documentaries on players and coaches. It’s amazing how he absorbed any and all football knowledge. He’d ask, “Mom, who’s your favorite quarterback?”
As spring approached, I noticed signs advertising Flag Football. I have a friend who manages the local community sport groups (i9 Sports), so I inquired about Jackson playing. She assured me it was NOT contact and the coaches were to ensure this as well. After checking in with our Hemophilia Treatment Center, we signed him up for Flag Football! Jackson LOVED it!! He learned more about the game and all the various positions; his coaches were encouraging and referred to him as a “beast” when pulling flags.
With guidance, we were able to find a work-around that appeased his passion for football, kept him safe, and enforced our “you can do anything” motto.
**As with any new activity, or if you are having joint or bleeding problems, make sure you check with your physician or therapist to be sure you are ready to get started.
Jen lives in Ohio with her husband, Joe, and their three children: Evelyn (21), Nora (14), and Jackson (7).