Inhibitors Will Not Inhibit Our Family 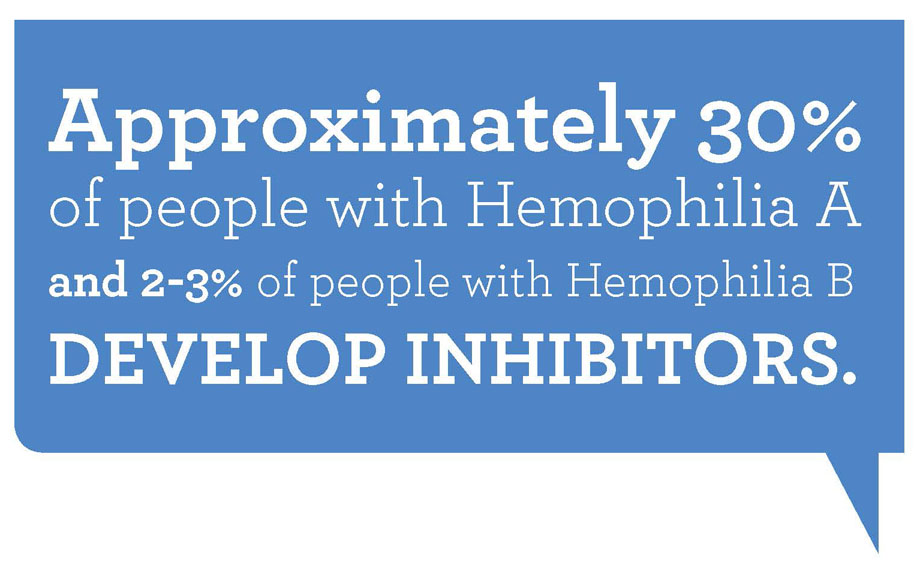 I’m sitting and watching my son Blake play catch in the park with a friend. He runs for the ball and trips on a rock and lands in the dirt. I stay seated…and it’s really hard. I remind myself that we are in a different place now, but it’s still very hard. A year ago, I would have been up and running. I would have taken him home and infused him right away. A year ago, Blake had a high inhibitor. Now, after eight long years of immune tolerance, we are in “wait and see” mode. What a different world, and what a different way of living life.

It’s been nine and a half years since my son Blake was diagnosed with hemophilia. The ups and downs have made my family feel like we are living on top of a huge yo-yo. Hemophilia was a scary diagnosis. It was not something that we knew anything about. It took his first bleed for us to begin to understand what we were now facing. It took a few more bleeds for us to start living life like we should again. Then, at 18 months, we were sitting in our hemophilia treatment center the day before Blake was scheduled to have his port surgery when the other shoe dropped. Who knew five words could send us reeling again? Our doctor had just told us, “Your son has an inhibitor.”
It felt like we were diagnosed all over again. The port surgery went on as planned. Our doctor wanted us to begin Immune Tolerance Therapy (ITT) right away, using the same brand of factor we had already been on. His inhibitor was only at 1-1.5 Bethesda Units (BU) when it was discovered, which is pretty low, and this gave us hope that the ITT could work. The next four years were pretty uneventful. Blake started nursery school and had a few bleeds. When he was about 4 ½ years old, his inhibitor began to rear its ugly head. 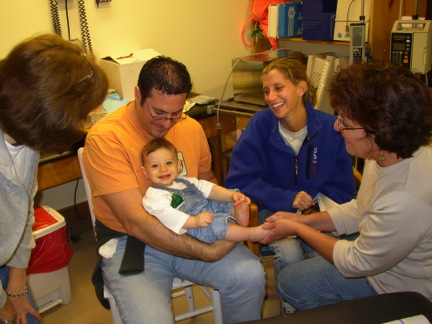 A right calf bleed sent us to the hospital. We found out Blake’s inhibitor had gone past 10 BUs, which means that he was now considered a “high responder.” Another bleed occurred and his inhibitor continued to climb. We connected with other families who had inhibitors, met other doctors, and learned about different strategies to eradicate the inhibitor. I remember pleading with our doctor to please change the factor that we were usingÂ for ITT, but she refused. It took another bleed for me to finally go get a second opinion. We left our HTC and found a new one, just in time for another hospital stay.
At this point, Blake could not use either of his calf muscles or his elbows. It was way past the time for a change. Our new doctor took Blake off the recombinant factor that he had been on for two and a half years and switched him to a plasma-derived product that contained factor VIII and von Willebrand factor. This was scary. We knew that plasma-derived products were much safer than they used to be, but there is always a small chance of something tainting the plasma supply. We felt we no longer had the choice. Blake’s inhibitor had made this choice for us. It took some time, but we began to get Blake’s hemophilia under control again.

Around this time, our doctor left our HTC to pursue research. She asked us to stay and give the new doctor a chance, and, unfortunately, we did. This doctor made a medical decision that we strongly disagreed with-he put Blake back on recombinant factor VIII, and it brought back his inhibitor. He was back to having three or more bleeds a week. He was living in an arm sling and using his wheelchair. He was also mad-something he had never been before. The difference was that now Blake knew what it was like to live without an inhibitor. He knew what it was like to live without pain. I felt helpless and angry.
I decided I was no longer waiting for the doctor to make decisions for us. I took control. I insisted that our doctor put Blake back on the factor VIII and von Willebrand product-the one that worked. I emailed our previous doctor for advice, as well as other doctors across the country. I took Blake for second and third opinions. I gathered my information and confronted our doctor. Instead of acknowledging that I was right about the fact that putting Blake back on the product with factor VIII and von Willebrand factor had brought his inhibitor back down to an undetectable level, our doctor’s biggest problem was that I had gone over his head. It was time for another change. It was hard to leave our nurse and the comfort of knowing and understanding our hospital, but it had to be done. 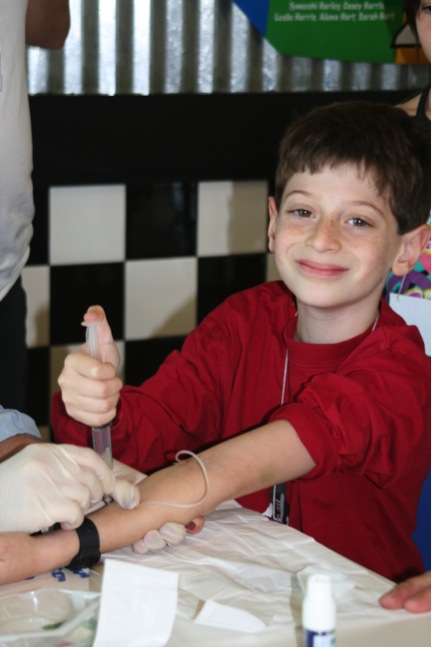 For a over a year now, Blake’s inhibitor has been undetectable. He has not had a bleed in a very long time. We went from at least three bleeds a week to Blake getting to be a child again. He has done things that I never thought he would do, including going to a sleep away camp that is not structured to help kids medically. Blake went for four weeks this summer and in his words “had the time of his life.” There is no way that my husband and I would have let him go if he still had the high inhibitor. Blake was able to make up some of the time that he had lost living on the couch at home and in the hospital.
This is an important time in our lives and in the world of inhibitors. Right now it appears that we may actually have beaten the inhibitor. It scares me to say this out loud. After living in “operation alert” for so many years, we finally have some breathing room. I wish I could say that I don’t worry as much anymore, but I still do. The biggest worry I have is that the inhibitor will come back. I have trained myself to stuff this worry down deep inside. It’s my worry, not Blake’s. Blake just needs to be Blake, and he is finally getting that chance.
________________________________
Rachel Katzman lives in Westport, Connecticut with her husband, Dan and her three boys, Blake, Matthew, and Kyle. Blake is the only one of her children with hemophilia, but it’s important to remember that his two brothers are just as special. Rachel and Dan had no idea what hemophilia was when Blake was diagnosed. They have since educated themselves not only about hemophilia, but inhibitors as well. The Katzman family sponsors an annual Alpine Snowshoe Walk that raises money for hemophilia, and it has become one of New England’s premier community-building events.