Intern Introspective: Through Our Eyes

What was it like to prepare for HFA’s patient Fly-In?

Camila: Preparing for HFA’s patient Fly-In was exciting and a bit hectic. We worked to put together all the materials for the patients and have everything ready so it could go off without a hitch. It was fun hearing what it would be like from the other people in the office because it was the first Fly-In I had ever been part of. I was excited and ready for the day to come.
Eric: Preparing for the Fly-In was really engaging. It felt great to be part of the team that worked so hard to find the right meetings with the right people. I also got a small peek “behind the curtain” at all of the unique and complex ways that the government works in DC.

Which topic was most interesting to you and why?

Camila: HR 3742, the Access to Marketplace Insurance Act, was most interesting to me because blocking third party assistance does not seem to be helping anybody — not even insurance companies. It seems like such an obvious issue since not letting people have assistance paying for their medications would then cause the insurance companies to lose money, but clearly it is not as obvious as I would have thought. Thankfully the legislators’ offices seemed to understand why this is a glaring problem, so hopefully there will be a change.
Eric: The Patients Access to Treatments Act (HR 1600) was a snapshot at why the bleeding disorders community needs to stay engaged and active. After the passage of the Affordable Care Act, the community breathed a collective sigh of relief at the elimination of preexisting conditions and lifetime caps. The loopholes that are being exposed, however, show us the constant need to stay vigilant.

What was your patient group like? Where were people from?

Camila: My patient group was a really interesting and fun group of people. Besides HFA staff, we had group members from New Hampshire and Rhode Island. I really enjoyed hearing each person’s story. It was interesting seeing how even though this is a big country and a lot of times it feels like we are all from very different places, the same big issues are impacting everyone and bringing community members together.
Eric: My patient group was fantastic. We were a geographically diverse crew, with some of us coming from the southeast, like Florida and North Carolina, and others of us from further west, like Texas and California. However, we all quickly rallied together to get behind our message of access to our crucial life-saving medicines. 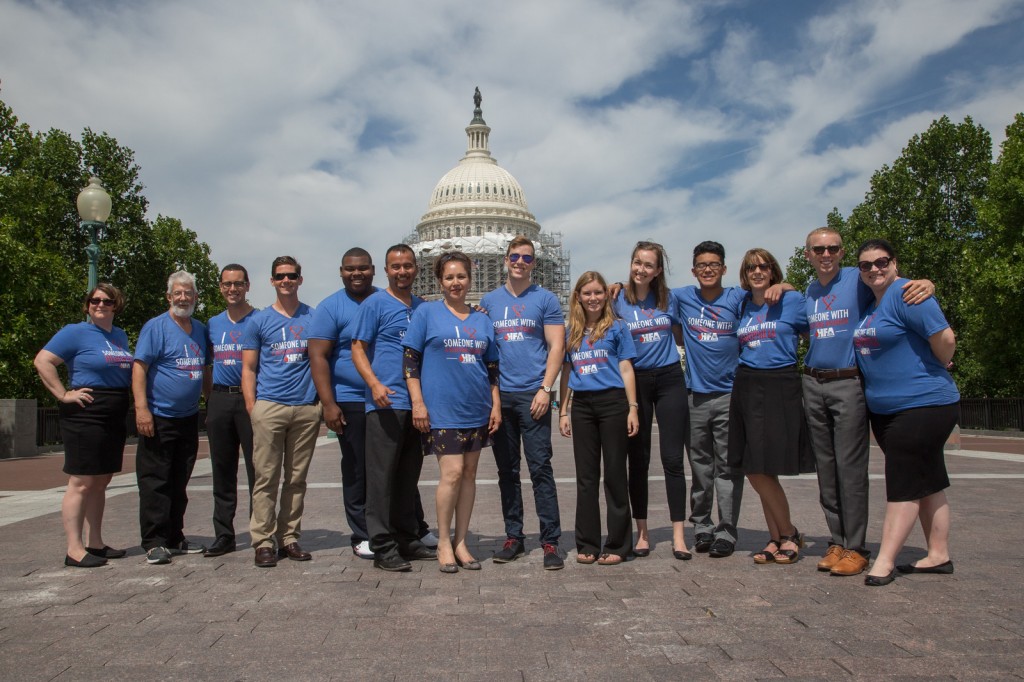 Do you think your efforts were effective?

Camila: In my group it really did seem like our efforts were effective because the legislative assistants seemed to actually be engaged with us and wanted to know what we had to say. Of course some meetings went better than others, but overall the day seemed to go very well and I think we really got some people thinking.
Eric: The congressional staff we met with were very welcoming. Coming as a community group gave the staffers an opportunity to have a good, genuine discussion with the people these laws affect. We had some people who disagreed with us, no doubt, but those who were receptive of our message really seemed to take it to heart. I would be very surprised if our group doesn’t nab a couple of co-sponsors in the coming days and weeks.

What was the highlight of the day?

Camila: The highlight of the day for me was the Congressional Reception because it was then that I got to hear how the day went for each group. It felt good to be there with everyone after having just spent the day on the Hill advocating for the bleeding disorders community. Overall it was an awesome day and a good learning experience for everyone involved.
Eric: The Congressional Reception was definitely a highlight. The amount of people (Congressional staff, community members, and even friends of the community) that showed up to talk about the work that HFA does was humbling.