But the success with the “bleeder’s disease” has brought on new problems few of them foresaw.
Suddenly, they are finding they must treat not only the disease, but also the social complications that go along with having such a crippling illness. Things like sexual hangups, personality problems, and even suicide.
Suicide, in fact, is the most common cause of death among adolescents who suffer from hemophilia, a hereditary disease in which a person’s blood lacks the ingredients to make it clot, according to Dr. James J. Corrigan, a blood specialist with the University of Arizona, where he is director of the new Mountain States Hemophilia Center.
The center recently played host to a national conference on hemophilia, and one of the major topics for discussion was the treatment ofÂ Â the very serious social problems hemophiliacs suffer.
“There’s a new burden on the health professional,” said Dr. Steven Levine, a sex counseling expert from Case Western Reserve School of Medicine in Ohio. “Now we aren’t just expected to assure the maximum health of the person, but to help maximize his sexual potential.”
And the simple fact that a person suffers from a chronic illness probably predisposes him to chronic sexual or social problems, said Levine, who has no figures to cite but suspects that the incidence of sexual dysfunction, transsexualism and impotence is much higher in hemophiliacs than in healthy, normal men.
And those who do are destined to lives which, in many ways, just cannot be normal. Because families may get overprotective and because the hemophiliac himself finds he cannot compete in many typically male activities, often he develops what experts call a passive dependent personality.
Doctors and other health professionals are now realizing they must treat these problems as well as the medical one. Corrigan recommends that some of his patients participate in sports like swimming, and many are competitive, award-winning swimmers, he said.
In addition, health professionals are now beginning to offer sex guidance and aid, recognizing that sexual problems may be one of the most crucial a hemophiliac faces.
*Article courtesyÂ of Barry HaardeÂ ____________________________________________________
Title: Precipitate from Cold-thawed Plasma Potent in Therapy for Hemophiliacs
By: Unknown
Date:Â AugustÂ 23,Â 1965
Source: Journal of the American Medical Association
Use of a precipitate from coldthawed plasma-until recently thought to be valueless-may solve several major problems inherent in conventional therapy for hemophiliacs.
Judith G. Pool, PhD, Stanford University Medical Center, is the investigator who first found-almost by accident-that the threadlike substance precipitated during standard cold-thawing of plasma contains concentrated antihemophilic globulin (AHG).
Recently, Dr. Pool reported a simple technique for extracting this protein fraction. Since then, clinicians at Stanford Medical Center have used the precipitate in solution to infuse 14 patients more than 60 times. There were no apparent side effects. 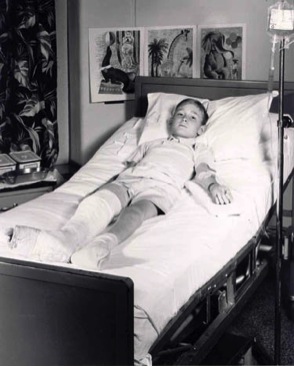 Dr. Pool, a physiologist, described toÂ The JournalÂ these advantages of the concentrate:

“This makes the AHG-rich concentrate- which traps 70% of the plasma unit’s AHG – a by-product of blood banking,” Dr. Pool said.
To illustrate clinical usefulness, Dr. Pool described the conventional frozen plasma therapy for severely bleeding adult hemophiliac compared to that with cryoprecipitate solution.
The AHG level in such a patient is less than 1% of normal. To raise the patient’s AHG level to a desired 50% of normal would require approximately 6 units or 1,600 ml of plasma.Â  (Frozen plasma contains an average of 65% of AHG in fresh plasma.)
Infusion would take two hours or more; and the patient might not be able to tolerate this increase in circulatory volume.
In contrast, to obtain the same AHG level of 50%, only 55 ml or lass of the concentrated solution is needed. Infusion takes at most 5 minutes.
“AHG concentration of the solution averages about 2,000%,” Dr. Pool said. “Thus it is about 30 times as potent as the frozen plasma on an equal protein basis. Since the total infusion volume is reduced to 1/30 that of plasma, there is no danger of overload.” Moreover, “the patient gets this highly concentrated AHG source at a considerably lower cost per unit AHG activity than with the two commercial products, or fresh frozen plasma,” she said.
No Additional Factor
The investigator stressed that classic hemophilia is apparently the only coagulation deficiency for which the new concentrate is therapeutically valuable. Except for fibrinogen, there is no concentration of factor other than AHG. Work leading to clinical use of the cryoprecipitate began in 1959…
__________________________________________
Title: Home Treatment Eases Burden of HemophiliaÂ

By: Joseph L. Lincoln Of The Bulletin Staff
Date:Â Unknown
Source: Philadelphia Bulletin
It was a happy Thanksgiving in 1963 for the family of Mark Warriner, until Mark fell off his grandfather’s lap. Mark, then not quite a year old, hit his gum against a table and started bleeding. He kept bleeding for a week.
Mrs. Fred Warringer, of 569 ½ Rosalie [S]t., took her son to several doctors and received the diagnosis. It was hemophilia, an hereditary disease in which blood fails to clot normally.
Frequent Hospital Visits
For several years the Warriners had to take Mark to the hospital for treatment whenever he had a bleeding incident.
Cuts weren’t the only problem. Bruises of the joints, especially the knees and ankles, often unnoticed in other people, cause painful swelling for Mark and, if left untreated, can cripple him.
At first, he was treated with transfusions of whole plasma, then with cryo-precipitates and anti-hemophilic factor, extracts of plasma that can be given by injection.
Home Therapy Possible
The injection treatments, according to Dr. Irving Wolman, consulting hematologist at Children’s Hospital, enable Mark to go on a home treatment program. His mother, trained at Children’s Hospital, gives him the shots.
“When he was smaller, he spent more time in the hospital than at home,” Mrs. Warringer said.
Now at 8, Mark is a third-grade pupil at Benjamin Franklin School, Rising Sun and Cheltenham [A]ves. He’s not allowed to play baseball or football, but he does swim.
First Family Vacation
Last summer, because Mrs. Warringer was able to treat him, the family took its first vacation, traveling to Williamsburg, Va. and Myrtle Beach, S. C.
“Now he’s old enough to be able to tell me when he has a problem,” Mrs. Warriner said. “When he was younger, he was afraid to tell because he got a needle and it hurt.”
When he is older, Mark should be able to treat himself, Dr. Wolman said.
$35 a Shot
The injections are costly, about $35 a shot, although some of Mark’s are covered by insurance. Mark receives the injections as needed, about one a week. Some hemophiliacs, however, may need as many as six or eight of the shots at one time, costing several hundred dollars. “It’s a misconception that the hemophiliac is like a sponge -that you nick the sponge and blood will come out. Many actually go months without trouble,” the doctor said.
“With sufficient funds, we can give boys like Mark Warriner a chance for a brighter future, free from the pain, crippling and hospitalization that accompanies this disease,” he said.
The hemophilia campaign begins next month.
*Article courtesyÂ of Barry Haarde
__________________________________________ 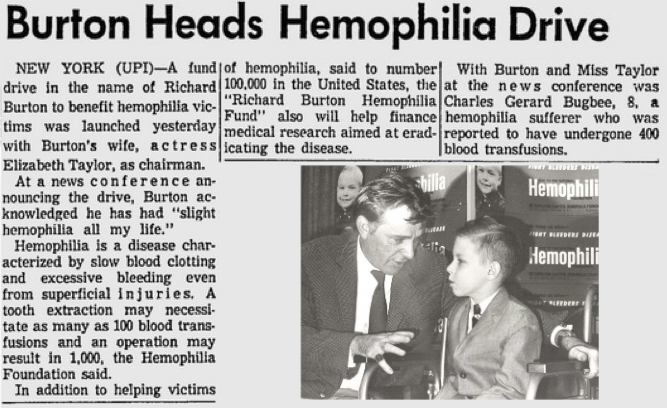 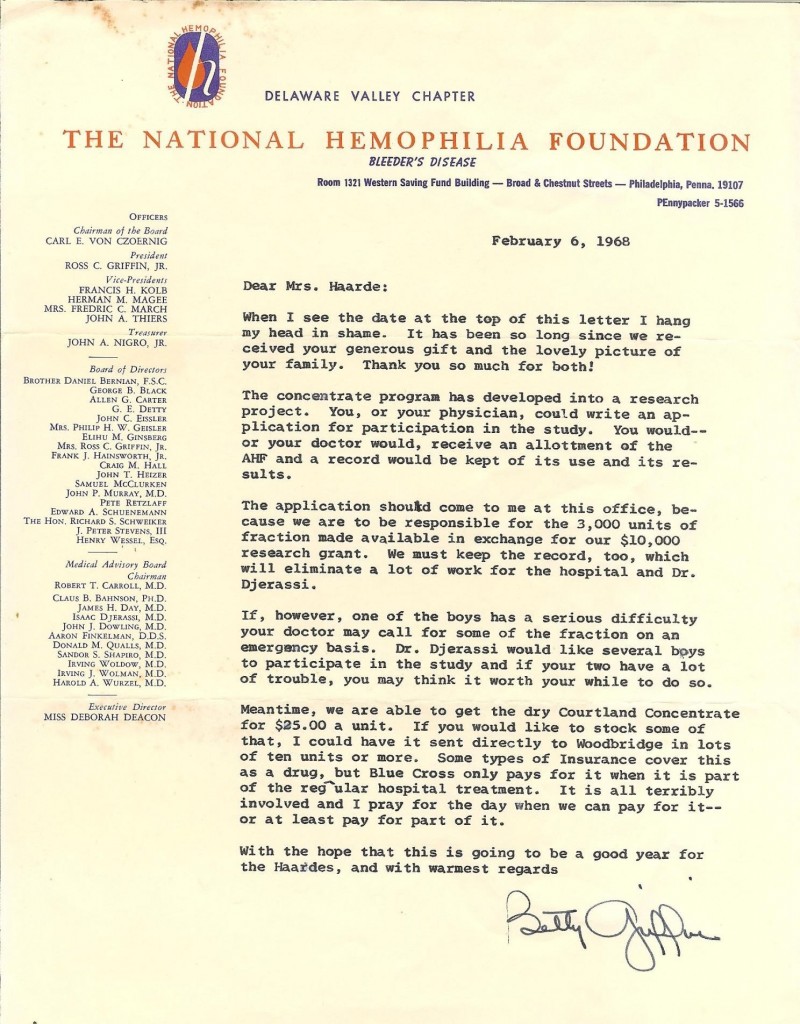 February 6, 1968
Dear Mrs. Haarde:
When I see the date at the top of this letter, I hang my head in shame. Ir has been so long since we received your generous gift and the lovely picture of your family. Thank you so much for both!
The concentrate program has developed into a research project. You, or your physician, could write an application for participation in the study. You would– or your doctor would, receive an allottment [sic] of the AHF and a record would be kept of its use and its results.
The application should come to me at this office, because we are to be responsible for the 3,000 units of fraction made available in exchange for our $10,000 research grant. We must keep the record, too, which will eliminate a lot of work for the hospital and Dr. Djerassi.
If, however, one of the boys has a serious difficulty your doctor may call for some of the fraction on an emergency basis. De. Djerassi would like several boys to participate in the study and if your two have a lot of trouble, you may think it worth your while to do so.
Meantime, we are able to get the dry Courtland Concentrate for $25.00 a unit. If you would like to stock some of that, I could have it sent directly to Woodbridge in lots of ten units or more. Some types of Insurance cover this as a drug, but Blue Cross only pays for it when it is part of the regular hospital treatment. It is all terribly involved and I pray for the day wehn we can pay for it– or at least pay for part of it.
With the hope that this is going to be a good year for the Haardes, and with warmest regards.